Hundreds of thousands are protesting President Donald Trump’s administration and his hateful rhetoric during the campaign in the Women’s March on Washington and at numerous other marches across the United States and the world. Conservatives and other figures have attacked the demonstration with sexism and other demeaning comments. Piers Morgan: “Rabid Feminists” Creating “Global Emasculation Of My Gender.” Daily Mail columnist and former CNN host Piers Morgan wrote that he was “planning a 'Men's March' to protest at the creeping global emasculation of my gender by rabid feminists.” Morgan also labeled the demonstrations, “just an anti-democratic protest at Trump winning the presidency.” Infowars’ Paul Joseph Watson: Protesters Are “Utter Morons.” Paul Joseph Watson, who works for  conspiracy theorist Alex Jones’ Infowars, argued that “morons” at the protest should “go and protest against honor killings” because “women in the west have never had it better.” David Clarke: March Was “An Absolute Freak Show.” Frequent Fox News guest Sheriff David Clarke described the march as “an absolute freak show.” He added, “P-T Barnum should have delayed the announcement to shut down.” 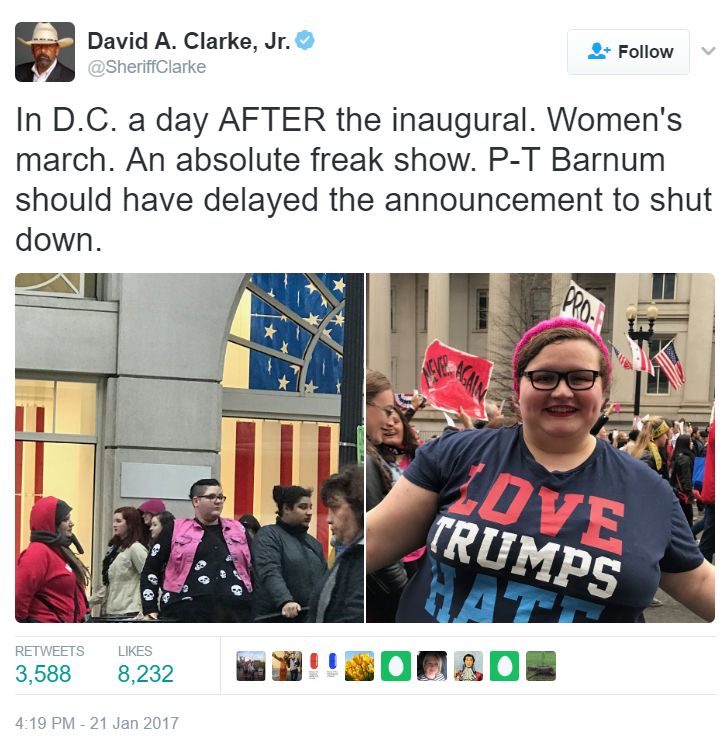 Conspiracy Theorist And Trump Backer Alex Jones: Women's March Participants Were “Unattractive, Troll-Like Women.” Jones recounted his experience observing the Women's March in Washington D.C., stating, “They were outside my condo, we were about to leave, so I went down to do a Facebook mentions, and they would walk by, they were mainly white women. Mainly, let's just say it, because they have been disenfranchised, they don't feel beautiful, unattractive troll-like women.”

NRATV Co-Host: “At Least Trump Got More Fat Women Out For A Walk In One Day Then Michelle Obama Did In 8 Years.” Chuck Holton, who hosts a web series for the National Rifle Association alongside Fox News contributor Oliver North, wrote on Twitter that participants in the march were “fat women”: