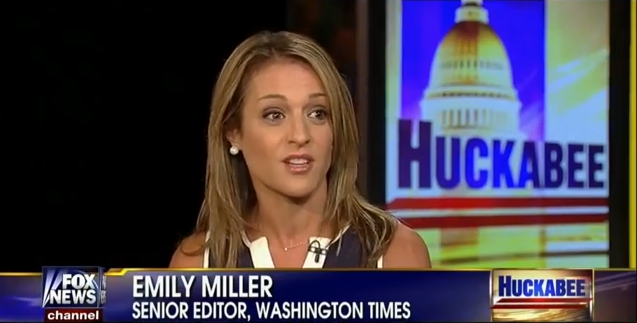 On March 27, the Maryland House of Delegates approved the Fairness for All Marylanders Act of 2014, which prohibits discrimination against transgender people in employment, housing, credit, and public accommodations. Gov. Martin O'Malley (D-MD plans to sign the bill into law, but opponents seized on the bill's public accommodations protections to claim that the so-called “bathroom bill” would lead to a spike in sexual assaults.

In an April 2 column for the Times, Miller echoed that attack, denouncing the bill as “dangerous” and warning that it “endangers every single female”:

The most dangerous impact of this new law is that a man cannot be stopped from going into a women's bathroom, locker room or pool changing room.

The state does not specify that a person must have undergone a sex-change operation to have their legal rights of “gender identity” protected.

A man doesn't even have to dress like a woman.

To be considered transgender, you just have to give a “consistent and uniform assertion” of believing you are supposed to be the opposite sex. Or, a person has to provide evidence that the non-biological sex is “sincerely held as part of the person's core identity.”

No one knows exactly how many people believe they were born the wrong sex and want to act out on it. A Los Angeles County Department of Public Health report in 2012 estimates that 0.2 percent of the population is transgender.

Even if we accept this very high count, that means 12,000 of the 6 million Marylanders will benefit by this law that endangers every single female.

Miller's transphobic fear-mongering about the bill's consequences has no empirical basis. Baltimore City, Baltimore County, Howard County, and Montgomery County already have transgender non-discrimination protections on the books and haven't experienced the problems Miller and opponents of the state bill predicted.

Moreover, an extensive Equality Matters report based on interviews with 15 experts -- including police officials, government employees, and sexual assault advocates -- in 12 states with transgender protections found no instances of sexual predators using such laws to commit sexual assault in women's facilities.

While Miller might scoff that the Maryland bill doesn't require transgender people to undergo gender reassignment surgery, surgery isn't a prerequisite to identifying as transgender. Experts note that most transgender people opt not to undergo surgery for a variety of reasons, including the often-prohibitive cost of the procedure and a sense that undergoing surgery isn't necessary to living out their gender identity.

Miller's fact-free attack on transgender equality is par for the course from the author of the distortion- and error-ridden Emily Gets Her Gun: ... But Obama Wants to Take Yours. And it continues The Washington Times' tradition of publishing factually baseless attacks on the LGBT community and its allies.

If Miller and the Times are interested in exposing actual problems relating to transgender people and bathroom harassment, they could start by highlighting the discrimination, harassment, and assault all too often faced by transgender people trying to use facilities appropriate to their gender identity. Inconveniently for Miller and her paper, that might require a newfound interest in facts.