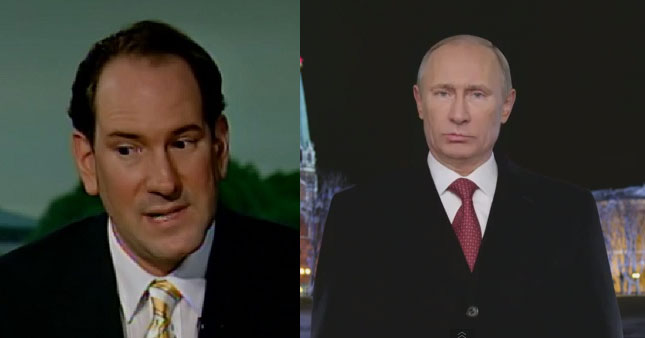 On Labor Day, visitors to the Drudge Report, the conservative news aggregator operated by Matt Drudge, were greeted by an above-the-fold story about the meeting between Russian President Vladimir Putin and President Obama at the G20 Summit in China. Drudge’s headline for the story was “Lion And The Pussycat”: 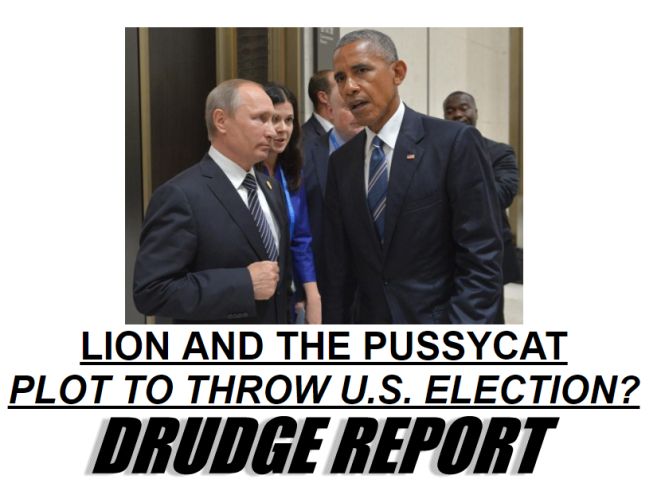 The Drudge headline is part of a larger pattern from the site of consistently promoting Putin and his strongman style of leadership (the “Lion”), which Drudge has often contrasted with President Obama, whom he characterizes as a weaker leader (the “Pussycat”). Drudge has also consistently promoted pro-Russian news and information, repeatedly harping on the idea that American power is weakening and in decline.

Matt Drudge has extolled the virtues of Vladimir Putin for some time. In 2013, Drudge declared that “Putin is the leader of the free world,” adding to a chorus of conservatives backing the Russian leader. Around the same time, Drudge featured Putin at the top of his site as “Putin To The Rescue” (a headline he would re-use two years later) as the leader began discussing a possible military role for Russia in Syria. 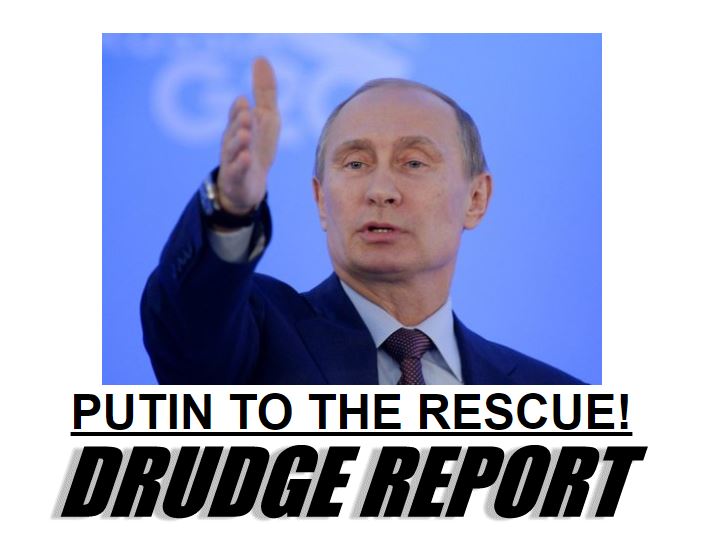 Over the past few years, Drudge has used his site to promote a steady stream of stories favorable to Putin, often while denigrating President Obama and the United States.

Drudge’s boosterism of Putin has continued even as the FBI and other investigative services have alleged that hackers working at the behest of Russian intelligence have compromised American computer systems, including via an intrusion at the Democratic National Committee.

The U.S. director of national intelligence has also recently testified that an inquiry is currently underway to see whether Russians are attempting to influence the 2016 presidential election.

Drudge has couched some of his stories about Putin with accompanying articles and headlines comparing his leadership style to that of Republican presidential nominee Donald Trump.

In December, Drudge highlighted a Financial Times piece that compared Putin to Trump using the text, “Russian president offers glimpse of strong leader.” This was paired with an article describing Putin as part of a “strongman revival” showing a “global trend.”

During the Republican primaries, Drudge spotlighted a comment from Putin describing Donald Trump as a “very talented man.”

Drudge Hypes Putin As A Strongman

The Drudge Report has repeatedly highlighted stories focusing on Putin as a strong or tough world leader, often in a military context.

The Drudge Report placed an above-the-fold link to a threat from Putin that he could use nuclear weapons against ISIS.

Putin made it above-the-fold in a link to a Breitbart News article referring to ongoing negotiations over Syrian chemical weapons. The headline was “Hand ‘Em Over,” with a photo of Putin. Drudge hailed Putin for “flex[ing] muscle” as elections approached in Russia, bundling that link with others offering defenses of Putin against American criticism:

Drudge gave above-fold treatment to a story asking if Russian airstrikes had killed the leader of ISIS (they hadn’t) with the headline “Did Putin Kill ISIS Leader?” The report linked did not name Putin or even reference Russian forces and their activities in the Middle East at the time. It appears Drudge invoked Putin’s involvement on his own. As the annexation progressed, Drudge labeled the campaign as “Putin In Control.” In addition to articles promoting Putin as a strongman, Drudge has also sought to use those stories as a contrast to President Obama and United States policy.

When Putin wrote a New York Times op-ed questioning the concept of American exceptionalism, it was featured at the top of the Drudge Report.

While linking to a New York Post story claiming that Obama has turned Putin into the most powerful leader in the world, Drudge used the headline “Red Planet: Putin Snubs Obama.”

He also highlighted a story about a “Putin cafe” that “has Obama toilet paper.”

Drudge linked to a story purporting to tell “how Putin beat Obama in Syria.” The original headline referred to “monstrous Putin,” but Drudge removed the adjective once he aggregated the story.

After Russia engaged in airstrikes in Syria, Drudge juxtaposed a news link of that action with another story in which Putin called America “weak.”

After the November 2015 terrorist attack in Paris, Drudge led his site with a headline asking if Putin would be the one to “rescue” the world from ISIS

When Putin has been involved in international controversies, the Drudge Report has been a part of his administration’s pushback, often with links to official Russian news outlets, or those with state sponsorship.

The Drudge Report highlighted a story from the state-financed Russian news outlet RT in which Putin claimed that he would neutralize a purported “missile shield threat” coming from America. Drudge has also used his platform to chronicle Putin’s day-to-day activities as leader of Russia.

He made a note of a Putin visit to Iran, which for some reason was featured above-the-fold.

When Putin said he was considering running for a fourth presidential term, Drudge compared him to Stalin, and it was meant in a positive light. A story from the official Russian news agency Tass speculating that Elton John might meet with Putin while in Russia for a concert received a Drudge link. When world leaders attended a meeting of the G20 in Russia, Drudge posted photos of Putin greeting them along with the headline, “World Into The Arms of Putin.” He also wrote that “Obama shows up late -- and alone -- to dinner with Putin.” A story about the Russian Defense Ministry purchasing dolphins was paired with an article headlined “Fighter Jets Sent To Watch Putin.”

An announcement that a state media agency in Russia was dissolving also made it above-the-fold on Drudge.

Drudge linked to a report from the Russian news agency Tass about a meeting between Putin and Chinese President Xi Jinping with a picture captioned “Putin Courts Xi.” When Putin played in a hockey game, that made the Drudge Report too. Drudge illustrated an ABC News story on Putin’s exercise regimen with a photo of the president. Drudge took note of a Putin encounter with leopard cubs in Sochi, Russia.

After the 2014 Olympics in Russia had concluded, Drudge put “Games Over: Putin Ready to Take Off Gloves?” above-the-fold.