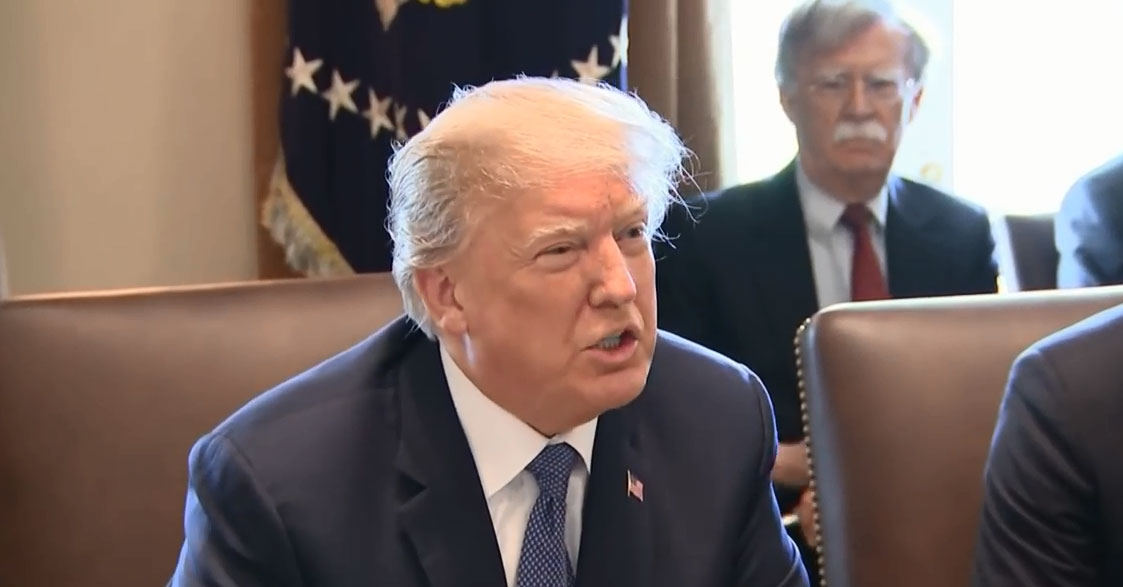 This morning, the president pecked out an especially unglued Twitter tirade in which he announced that the United States would be taking military action against the Syrian government. According to Donald Trump, who very likely made this announcement because the lackwit bobbleheads on his favorite morning cable TV show were talking about Syria, his plan is to fire “nice and new and ‘smart!’” missiles as punishment for “Gas Killing Animal” Bashar Assad’s recent alleged chemical attack on the town of Douma.

To add still more unnecessary drama to the announcement, Trump packaged it as a taunt to Russia, which backs the Assad government in its brutal war against Syrian opposition forces and vowed to intercept any U.S. missiles fired at Syrian government targets.

Russia vows to shoot down any and all missiles fired at Syria. Get ready Russia, because they will be coming, nice and new and “smart!” You shouldn’t be partners with a Gas Killing Animal who kills his people and enjoys it!

It would be dangerous for any president to unilaterally escalate U.S. military involvement in the Syrian civil war, but for an erratic and unthinkingly bellicose president like Donald Trump to go down this path is reckless beyond measure. Trump promised to attack the Syrian government with no hint of strategy, no attempt at legal justification, and not even a whisper about what such an attack is supposed to achieve (the last time Trump bombed Syria, it was meant to deter further chemical attacks, which apparently didn’t work). The only things we know for sure about this planned military action is that Trump plans to go ahead without Congress’ input, and that he intends it to be a deliberate provocation of the nuclear-armed regional power that is deeply immersed in the Syrian civil war.

Trump’s dashed-off pledge to strike against Syria raises critically important questions about U.S. Middle East policy, the power of the president to make war, and the dangers of a manifestly incompetent commander-in-chief making war plans based on what Fox & Friends chooses to cover. Faced with these weighty issues, however, the immediate reaction from the press was to focus on the least important aspect of Trump’s planned military action: whether he is a hypocrite for announcing it ahead of time.

Immediately following Trump’s tweet, Twitter was full of pundits and reporters whose first reaction to the president’s announcement was to wryly poke at his past criticisms of presidents who telegraphed their attacks.

This would seem to be a reversal of a key tenet of the Trump Doctrine: element of surprise!https://t.co/PRunciVJUg

President Trump on April 5, 2017 while considering U.S. response to a chemical attack in Syria:

“One of the things I think you've noticed about me is militarily I don't like to say where I'm going and what I'm doing... I'm certainly not going to be telling you." https://t.co/qVNAKmEPtQ

NPR’s early reaction to Trump’s tweet was to focus on the hypocrisy angle. “This is a president who has made a big deal of not showing his hand, especially when it comes to really important decisions as commander-in-chief,” NPR’s David Greene reported shortly after Trump made the announcement. “He’s doing exactly what he criticized Obama for doing,” NPR’s Mara Liasson agreed.

The reason reporters and pundits defaulted to the hypocrisy angle is because it’s an easy criticism that is ultimately meaningless and thus safe for them to have an opinion on. And it indicates how alarmingly comfortable much of the mainstream press is with the idea that the president can just up and decide to initiate military hostilities whenever, wherever, and for whatever reason -- even when there is no actual reason at all. It’s just another political game.

The Trump administration has not offered a compelling legal rationale for its attacks on the Syrian government. It hasn’t secured or even asked for authorization from Congress. The administration hasn’t garnered the support of the U.N. or the international community. Instead, the White House is just barreling forward with the longstanding executive-branch practice of initiating hostilities and then slapping together a retroactive pseudo-justification that it confidently assumes won’t be seriously challenged.

Few people seem especially bothered by this, and just about everyone is ready to accept that oafish hothead Donald Trump can bumble ass-first into another Middle Eastern quagmire because he’s the president and the president can do that. But as missiles careen into Syria and the U.S. lurches aimlessly into a broader military conflict involving Russia and Iran, at least we can say we called out Trump on Twitter for being inconsistent.