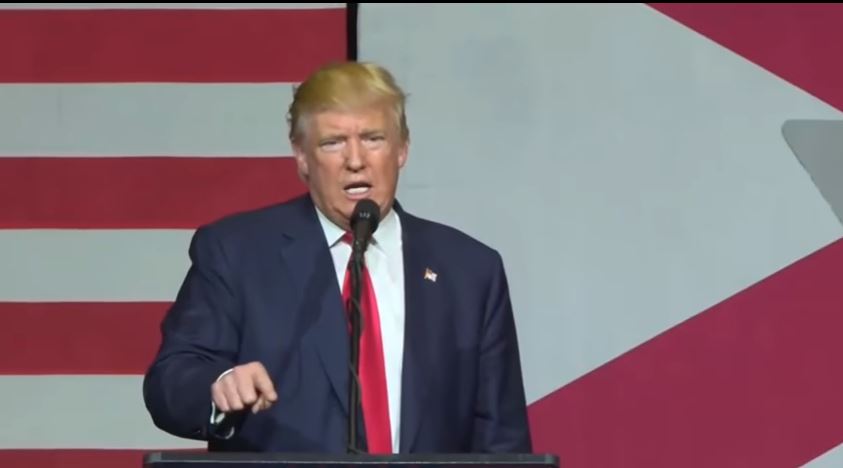 At the center stands a gargantuan $800 billion reduction to Medicaid, which currently helps insure more than 70 million people, pays for millions of births each year, covers approximately 40 percent of all nursing home costs in America, and provides treatment for patients addicted to opioids.

The cuts were detailed in President Trump’s first federal budget, which was delivered to Congress on Tuesday. The proposal represents a truly radical scheme.

It also revolves around a stunning Trump flip-flop. Because while eyeing the White House, Trump had a much different plan as he promised to protect Medicaid, not take a chainsaw to it. (Trump in 2015: “I’m not going to cut Medicare or Medicaid.” )

The Republicans who want to cut SS & Medicaid are wrong. A robust economy will Make America Great Again! https://t.co/u25yI5T7E8

Trump's promise means that some form of this headline should be appearing on news sites all across the country this week: “Trump breaks campaign promise by proposing massive cuts to Medicaid.”

That’s just Beltway Journalism 101: If a politician promises one thing while running for office and then immediately does the complete opposite after being elected, that’s considered news. Especially if it’s the president of the United Sates.

But we’re not seeing many of those headlines with Trump and Medicaid. Yes, news organizations are stressing that Trump’s budget would result in unprecedented cuts to anti-poverty programs. But the second key part about Trump’s attack on America’s long-standing social safety net representing an abdication of a major campaign promise? That is getting very short shrift.

That’s distressing because it evidences a larger problem where journalists no longer consider Trump’s rhetoric and promises to be serious enough to bother holding the president accountable.

In other words, if the press is willing to normalize Trump’s duplicitous behavior to the point where it doesn’t even report that the cornerstone of his proposed budget represents a stunning case of political hypocrisy, then journalists are slowly becoming part of the problem.

For context, here’s how enormous the Medicaid cuts are that Trump is now proposing:

The Trump budget would literally cut Medicaid in half by the final year
cc: @sangerkatz, @CitizenCohn, @TopherSpiro, @ASlavitt, @MEPFuller pic.twitter.com/G0BPZKu6MC

And yet many in the press have glossed over the fact that the historic cuts clearly contradict Trump’s previous promises. In fact, some news outlets actually gave Trump credit this week for keeping some campaign promises with his budget.

President Trump's 2018 budget proposal on Tuesday won't reform Social Security or Medicare — in line with his campaign promise — but it will make serious cuts to other entitlement programs.

Axios wrote Trump kept “his campaign promise” by not touching Social Security or Medicare. But Axios was silent about the fact that Trump had obviously broken his promise not to cut Medicaid, let alone not to make “serious cuts.” (Furthermore, Axios was wrong that the budget doesn't cut Social Security and later deleted the “campaign promise” language and made other changes to its article.)

NPR did the same thing. It noted that Trump kept his pledge regarding Medicare and completely ignored his broken budget promise for Medicaid.

More of the same from Reuters:

Trump upheld his promise - for the most part - that he would not cut Medicare and Social Security, two expensive safety-net programs that deficit hawks have long targeted for reforms.

And more from CNN:

Donald Trump's budget that is expected to be unveiled on Tuesday will include $800 billion in cuts to Medicaid -- a move that underscores the President's resolve to significantly downsize the federal program even as Republican lawmakers are clashing over the issue in Congress.

Missing? Any context regarding candidate Trump and Medicaid. (Only later did CNN publish a story noting the broken promise.)

ABC News reported that the Trump budget includes “deep cuts” to Medicaid and then noted that “Democrats are criticizing the White House proposal, accusing Trump of going back on his promise to his campaign supporters.”

But it’s a fact that Trump went back on his promise, not merely a Democratic accusation.

For the record, there were major news organizations that did include references to Trump’s blatant Medicaid flip-flop in their coverage. But they did so much too timidly.

The Wall Street Journal, Los Angeles Times, CBS, USA Today, and NBC all noted Trump’s Medicaid flip-flop. The problem was that the salient fact was mentioned only in passing -- often via a single sentence -- and was often buried deep into the news accounts.

Trump advertises his hypocrisy every day. The press shouldn’t ignore his boasts.