In a pair of tweets, Donald Trump called for a “revolution” in the wake of President Obama's re-election.

In the first tweet, shortly after TV networks called the election for Obama, Trump tweeted, “He lost the popular vote by a lot and won the election. We should have a revolution in this country!” 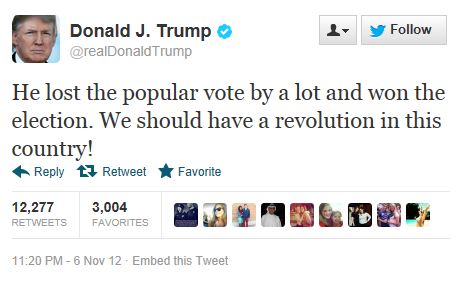 Trump is a frequent guest on Fox News, where he peddles anti-Obama conspiracy theories.

UPDATE: After this item was posted, the tweets were deleted from Trump's account.