In a recent interview, President Donald Trump repeated a right-wing, anti-abortion talking point alleging that Americans’ support for abortion is evenly divided. This talking point -- and Trump’s comment -- has emerged as part of the push to confirm Trump’s Supreme Court nominee Brett Kavanaugh and to paint any warnings about his likelihood of overturning of Roe v. Wade as overblown.

Trump: Views on abortion are “50/50” in the United States. In an interview with ITV’s Piers Morgan for the Daily Mail, President Donald Trump was asked whether he could “understand” that people “are concerned” about potential challenges to abortion rights that could come before the Supreme Court. Trump replied, “I do understand, but I also understand that you know, that’s a 50/50 question in this country.” Trump also said that he thinks his Supreme Court nominee Brett Kavanaugh “is going to be confirmed” and that a vote on Roe is not guaranteed. [Daily Mail, 7/14/18]

Trump’s argument has also been frequently used by right-wing and anti-abortion outlets to downplay threats a new conservative Supreme Court justice would pose to Roe. Right-wing and anti-abortion media have deceptively framed polling about support for abortion as just one tactic to downplay the severity of the threat another Trump-appointed justice would pose for abortion rights. Some outlets have also claimed that there is no cause for concern about Roe, since it is settled precedent. Other outlets have said that warnings from abortion supporters about Kavanaugh are “hysterical” since, if the Supreme Court were to overturn Roe, it would merely be correcting judicial overreach and returning regulatory power over abortion access to the states. [Media Matters, 7/5/18, 7/12/18]

Some media outlets reporting on Trump’s comment noted that his claim was false. In reporting on Trump’s comment, some media outlets noted that his claim about support for Roe was inaccurate. Newsweek’s Jason Le Miere wrote that Trump’s comment is “false” as demonstrated by a new Gallup poll that “indicated that 64 percent of Americans wanted Roe v. Wade to remain in place, with just 28 percent wanting to see it overturned.” Bustle’s Monica Busch cited both the Newsweek piece and the Gallup poll as proof of the inaccuracy of Trump’s claim. Bloomberg’s Justin Sink also said that “Trump’s characterization of views as ‘50/50’ isn’t accurate” and noted that “a poll published June 29 by the Kaiser Family Foundation said 29 percent want to see the ruling overturned, against 67 percent who said they would not.” [Newsweek, 7/14/18; Bustle, 7/15/18; Bloomberg, 7/14/18]

Polling about support for restrictions on abortions often fails to account for the complexities of abortion-related polling. To defend these inaccurate claims about a lack of public support for abortion, Trump and other abortion opponents often point to polling data. However, as Tresa Undem, founder and partner at the public-opinion research firm PerryUndem, wrote for Vox, most “standard measures” that are used “to report the public’s views on abortion ... don’t capture how people really think” about the issue. For example, polling done by Hart Research Associates on later abortions shows that support for later abortions goes up when people realize that abortions in later stages of pregnancy are often undertaken out of medical necessity or for particular personal circumstances. Similarly, a study by Harvard T.H. Chan School of Public Health showed that when people were asked about support for later abortions if a person was pregnant and had been infected with the Zika virus, their support for abortion went up. Without this understanding of the complexities of abortion polling, a poll such as the one Gallup released on June 11, that shows a majority of Americans (53 percent) think that abortion “should be legal in only a few (35%) or no circumstances (18%)” can be easily manipulated by right-wing and anti-abortion outlets to say that Americans favor restrictions on later abortions. [Media Matters, 2/2/18, 10/25/16; Vox, accessed July 2018; Hart Research Associates, 8/28/13; Harvard T.H. Chan School of Public Health, August 2016; Gallup, 6/11/18]

Right-wing and anti-abortion claims about lack of support for Roe push misinformation about current abortion law. Right-wing and anti-abortion media rely on a misunderstanding of Roe and the subsequent case Planned Parenthood v. Casey to say that the public does not support abortion rights. While those outlets claim Roe and Casey allowed “abortion on demand,” the Supreme Court said in both Roe and Casey that the states have an interest in regulating abortion after fetal viability -- 43 states have used the rulings to regulate later abortions. [Pew Research Center, 1/16/13; Guttmacher Institute, 7/1/18]

Americans United for Life’s Catherine Glenn Foster on Fox News: “A majority of Americans do want Roe v. Wade overturned.” On Fox News’ The Daily Briefing with Dana Perino, host Dana Perino asked Catherine Glenn Foster, president and CEO of anti-abortion group Americans United for Life, about polling that shows a majority of Americans do not want Roe overturned. Glenn Foster said that such polling was inaccurate because it asked respondents about the overturning of Roe without “providing any further information.” She then pointed to Gallup polling, saying it demonstrated that “more than 50 percent of Americans -- a majority -- say that either abortion should be legal in no or very, very limited circumstances which requires overturning Roe.“ She further claimed that such results meant that “a majority of Americans do want Roe to be overturned.” [Fox News Channel, The Daily Briefing with Dana Perino, 7/16/18]

Life News: Polling showing support for Roe “has little worth or value because Americans” don’t understand Roe. Life News’ Steven Ertelt disputed the validity of “mainstream media outlets … touting new polls claiming to show that Americans support” the decision in Roe v. Wade. Ertelt argued that such polling “simply asks Americans what they think about the Roe v Wade decision” but does “not provide any details about what the infamous Roe decision actually did.” Because of this, Ertelt falsely claimed that “the polling really has little worth or value because Americans for the most part don’t really understand the pervasive nature of Roe v Wade and how it allowed virtually unlimited abortions.” [Life News, 7/3/18]

National Review’s Ramesh Ponnuru for Bloomberg: Americans “favor restrictions that are incompatible with” Roe. In an opinion piece for Bloomberg, National Review’s Ramesh Ponnuru wrote that when thinking about the nomination fight over Kavanaugh, “we should keep in mind” that “the public is ambivalent about abortion.” Ponnuru acknowledged that “most Americans do not want a ban on abortion, and favor its availability especially early in pregnancy and in cases of rape and incest, threats to the mother’s life, and severe fetal abnormality.” However, he said that polls showing support for Roe are “undercut” by polls that ask specifically about restrictions on, or the legality of abortion. In other words, Ponnuru noted, Americans “favor restrictions that are incompatible with current Supreme Court jurisprudence.” [Bloomberg, 7/3/18] 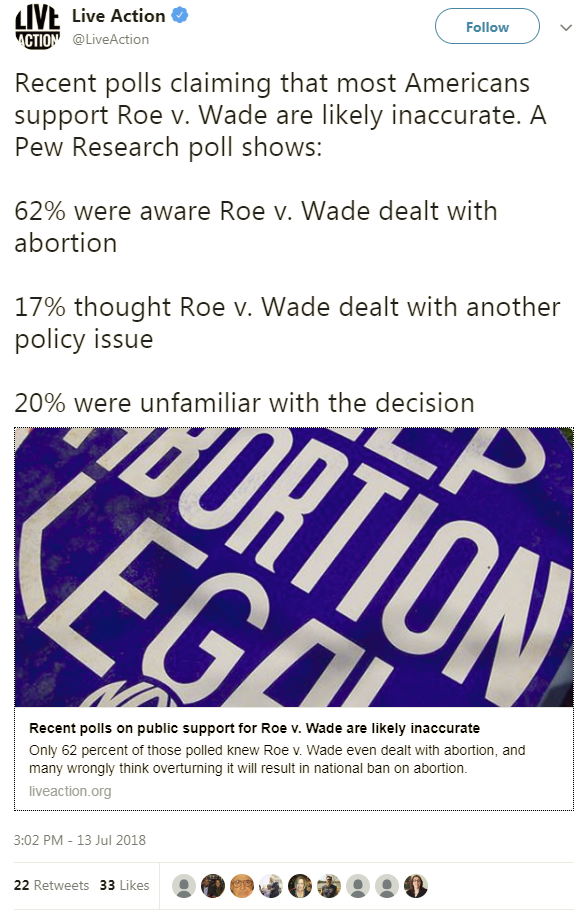