President Donald Trump has repeatedly quoted or retweeted Twitter accounts that have promoted far-right media trolls, fake news purveyors, conspiracy theories and a message board seen as a haven for white nationalists. This activity comes after Media Matters found last month that many of the accounts Trump had previously quoted were suspicious and that some of them were bots.

On July 27, Trump retweeted a meme from verified Twitter user @JeffTutorials calling CNN the “Fake News Network.” “Tutorials,” according to Paste Magazine, is a “16-year-old MAGA troll,” who has previously been retweeted by Trump and runs a YouTube page dedicated to the video game series Grand Theft Auto. The “Tutorials” account has promoted tweets from far-right trolls Mike Cernovich and Paul Joseph Watson along with @polNewsForever. That since-suspended Twitter account shared material from 4chan’s “politically incorrect” message board (commonly referred to as “/pol/”), a haven for white nationalists that has previously helped far-right trolls and fake news purveyors spread misinformation. 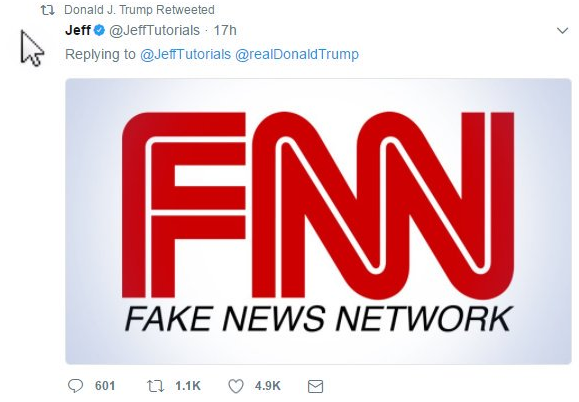 On August 15, Trump retweeted a meme of a person with the CNN Logo on its head being run over by the “Trump Train,” from the account @SLandinSoCal. The account previously retweeted far-right troll Jack Posobiec (whom Trump has also retweeted), a Facebook post from Paul Joseph Watson, and an anti-Semitic cartoon that Mike Cernovich used as part of his attacks on national security adviser H.R. McMaster. 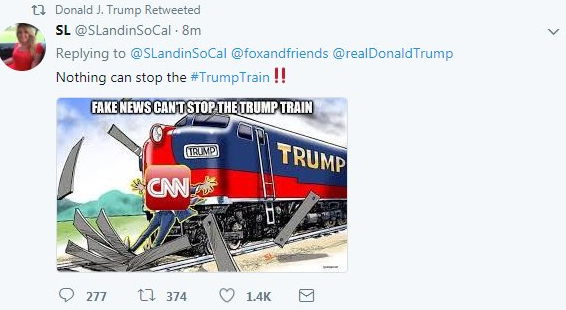 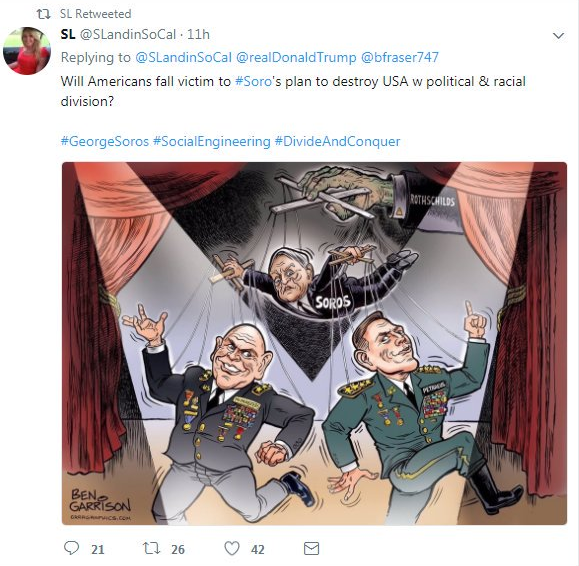 On August 24, Trump retweeted the account @JerryTravone, which posted a meme of Trump replacing Obama with the words “The Best Eclipse Ever!” The account had previously retweeted Watson, Posobiec, and fellow far-right troll Stefan Molyneux. 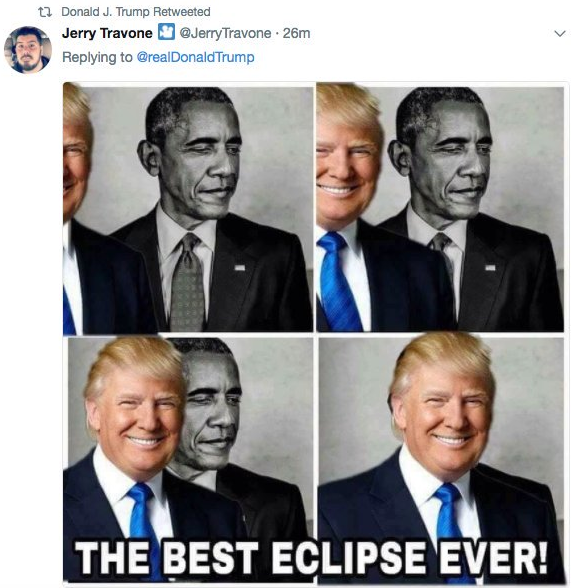 On September 17, Trump retweeted a GIF from account @Fuctupmind that showed Trump hitting a golf ball at Hillary Clinton. The account previously retweeted images of Pepe, the cartoon frog affiliated with the “alt-right,” @polNewsInfinity (another account that shares material from 4chan’s “politically incorrect” message board), far-right trolls Cassandra Fairbanks, Posobiec, and Watson, and an article from fake news purveyor TruthFeed. 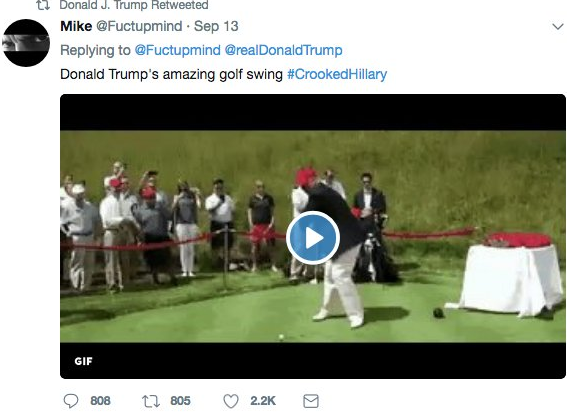 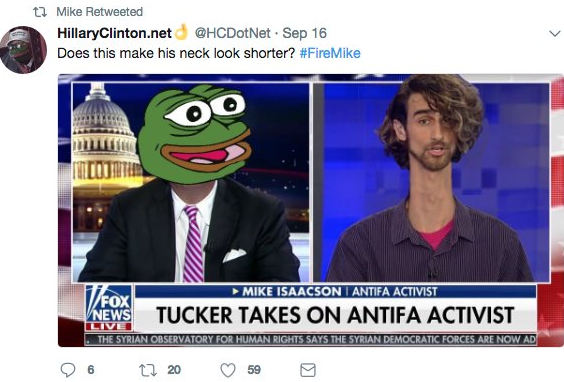 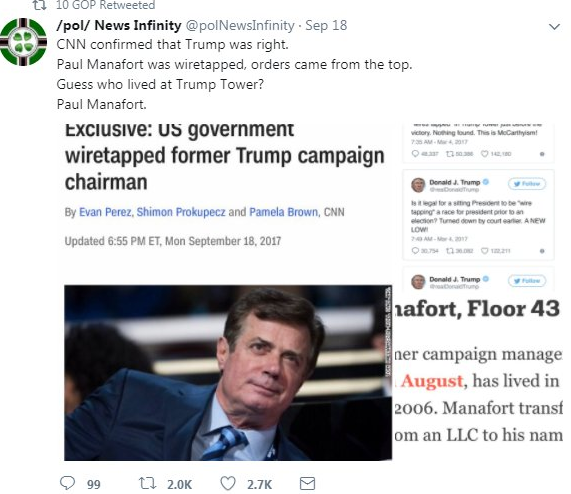 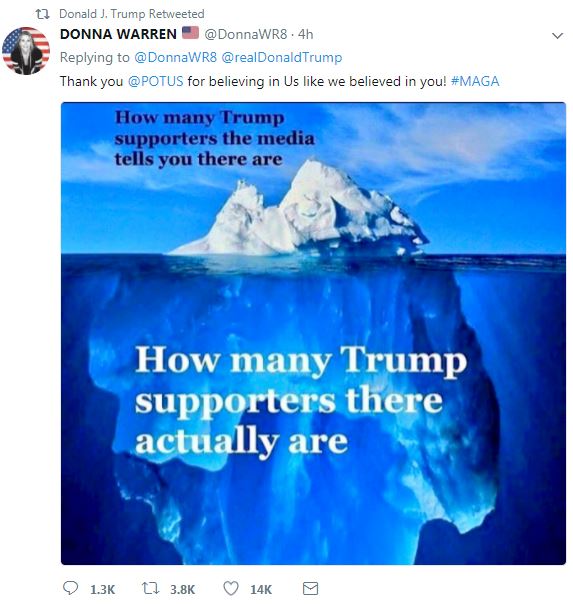 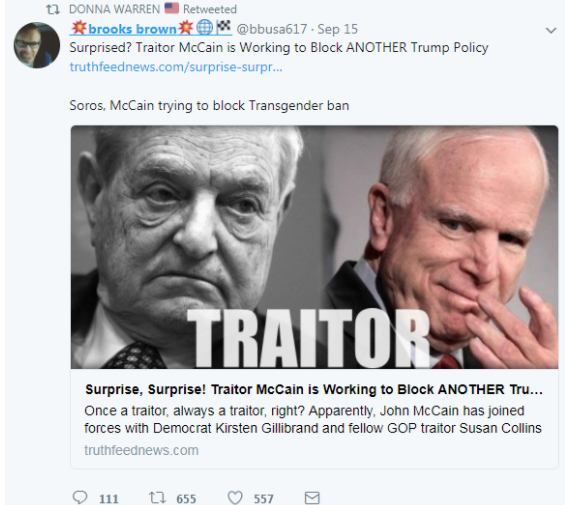 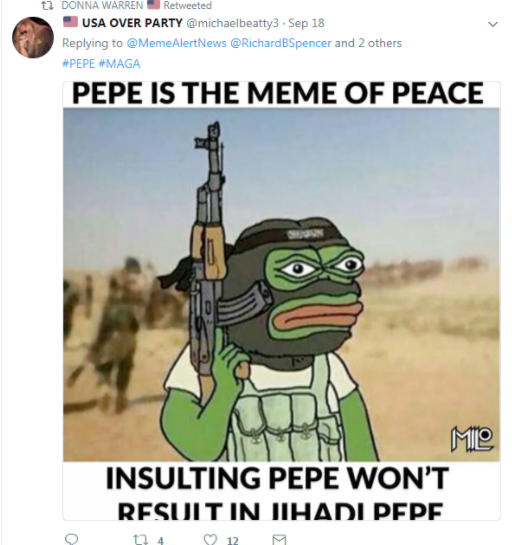 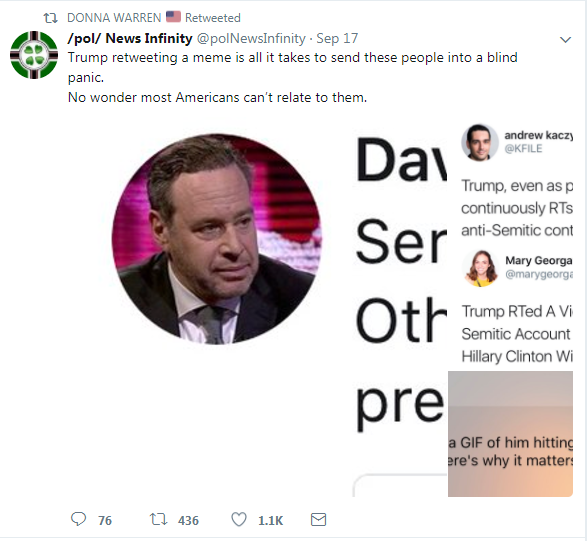