Right-wing commentator Herman Cain previously sent sponsored emails touting the alleged benefits of investing in precious metals, including a message from a gold company which claimed that a return to the gold standard “could provide the biggest wealth building event of our lifetime.” Cain is President Donald Trump’s pick for a seat on the Federal Reserve Board, which helps set the country’s monetary policy.

Cain was previously the chair of the Federal Reserve Bank of Kansas City and a Republican presidential candidate. He dropped out of the race in December 2011 after several women reported him for sexual misconduct. The Washington Post reported that one of those women, Sharon Bialek, has said she is “willing to testify before the Senate Banking Committee if called upon. And she said Cain’s past behavior with women, including three others who have accused him of sexual harassment, should disqualify him from the Fed post.”

His financial opinions have also come under scrutiny. Washington Post reporter Matt O’Brien recently wrote that “Cain spent the Obama years advocating for a return to the gold standard” -- which ties currency to the value of gold -- and explained why adopting such a policy would be problematic. He added that “literally every top economist in the University of Chicago Business School’s poll of them would tell you that the gold standard is a bad idea.”

Cain has used his email list to send paid advertisements which push gold and the gold standard. He sent a sponsored email on December 24 for the precious metals company Advantage Gold. The email, which was written by Advantage Gold Managing Director Kirill Zagalsky, claimed that House Resolution 5404, which is titled “To define the dollar as a fixed weight of gold” (also known as the gold standard), “could provide the biggest wealth building event of our lifetime” and “could double or even triple your retirement.” (The bill had no cosponsors and did not pass in the now-concluded 115th Congress.) Here’s an excerpt from the email: 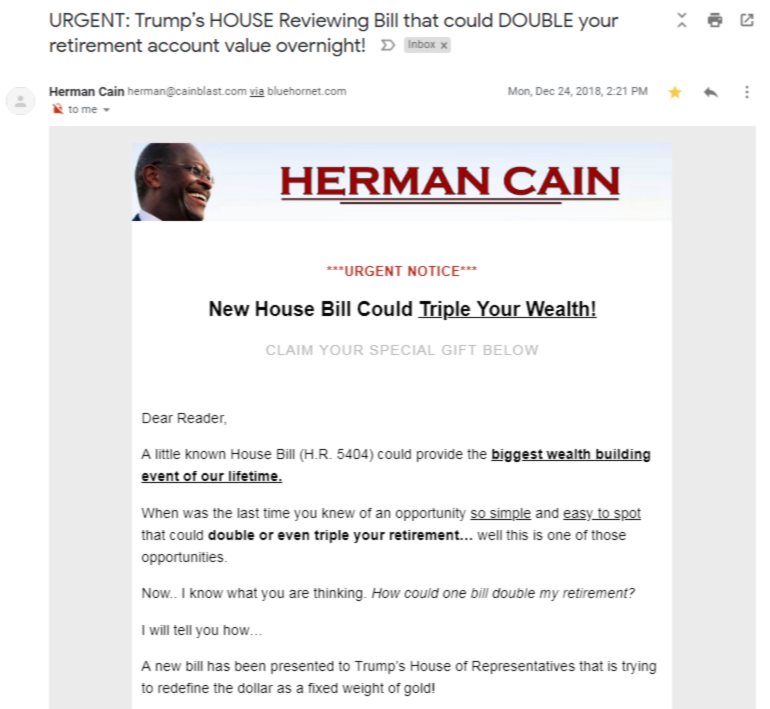 Clicking on the link in the email leads the readers to a form requesting that they enter their name, email address, and telephone number so they can receive a “secret” book chapter regarding gold.

In 2015, Cain similarly sent a sponsored email touting the supposed benefits of investing in gold and silver. The email, which was written by precious metals company Goldco, carried the subject line: “Your IRA or 401K Is Now Worthless.” It then claimed: “Just a few months ago, governments and central banks from all over the world met at the G20 Summit to decide the fate of your savings account should the worlds banks crash. Their decision? Your savings account is up for grabs. … But by using 1 simple & legal IRS Loophole you can protect your retirement dollars by adding physical assets like gold & silver to your retirement account.” 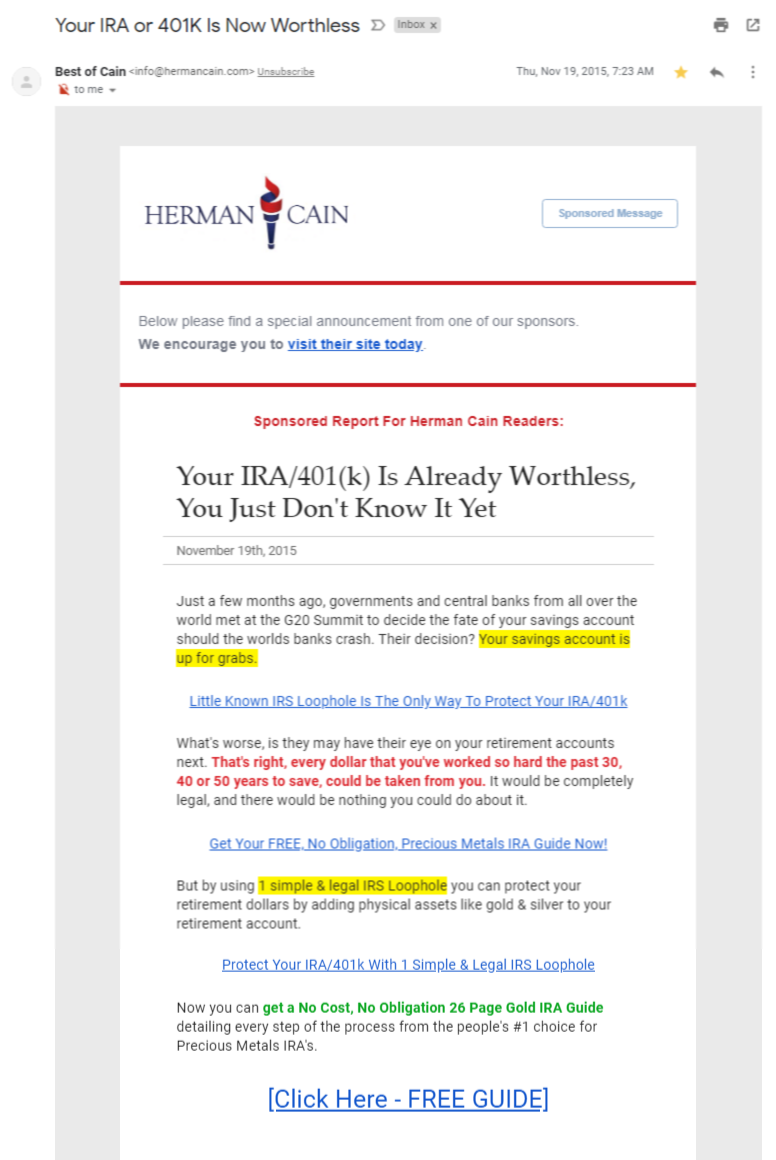 Media Matters has documented Cain’s other email grifts in light of his potential seating on the Federal Reserve Board: