Herman Cain, President Donald Trump’s pick for a seat on the Federal Reserve Board, took money to promote the newsletter of an anti-vaccine conspiracy theorist. Cain also sent sponsored emails suggesting that the government is forcing citizens to take “7 deadly drugs” and that former first lady Nancy Reagan's “desperate fight to cure Alzheimer’s disease” may be “over.”

Cain is a right-wing commentator who previously was the chair of the Federal Reserve Bank of Kansas City and a Republican presidential candidate. He dropped out of the race in December 2011 after several women reported him for sexual misconduct. The Washington Post reported on April 4 that “Sharon Bialek, who said Cain had reached beneath her skirt in 1997 and tried to pull her head toward his crotch, said Thursday that his record of harassment should disqualify him from the Fed post.”

Media Matters has documented that Cain sent scammy financial emails to his mailing list, including ones that touted now-virtually-worthless penny stocks and dubious financial advice like a “weird trick” that supposedly “adds up to $1,000 a month to Social Security checks” and a “moneymaking strategy” that could “turn $1,000 into $800,000.”

Catherine Rampell, who covers economics as a Washington Post opinion columnist, recently noted that “Cain spent the years following his failed presidential campaign spamming his email followers with snake-oil scams, promising 'weird tricks' that would make his followers get rich quick or 'naturally' cure their erectile dysfunction. Of course, such grifting might enhance Cain’s candidacy in Trump’s eyes, but it hardly bodes well for a man seeking to join an institution with consumer protection duties.”

Cain has also pushed sponsored emails with scammy medical information to his email list. Here is a look at three of those dangerous paid promotions. 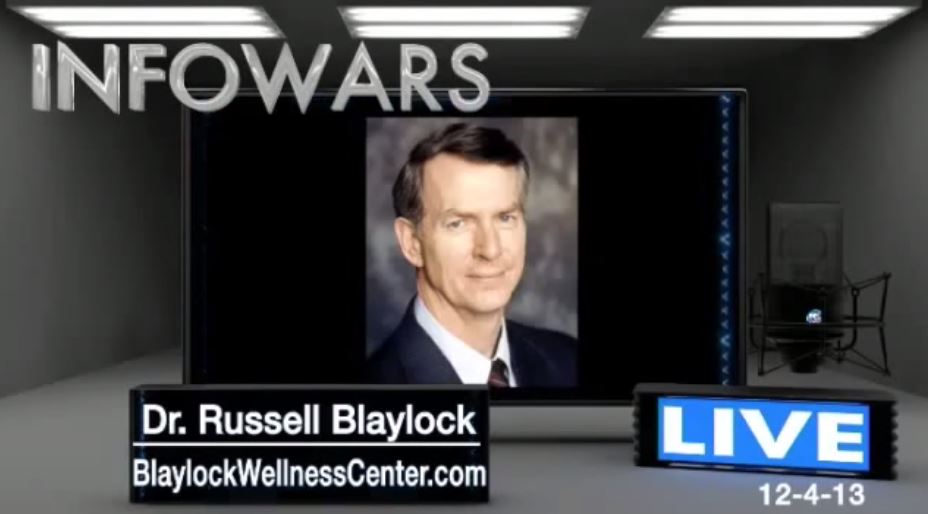 In 2013 and 2015, Cain sent sponsored emails touting the work of Dr. Russell Blaylock, an anti-vaccination “quack” who has repeatedly appeared on conspiracy theorist Alex Jones’ program. The emails were part of an advertising campaign for a subscription to The Blaylock Wellness Report, which is published by the conservative website Newsmax.

Blaylock is a frequent source of misinformation about vaccines through Newsmax, where he is also a columnist. Here are six false and dangerous headlines for Blaylock-written columns on Newsmax about vaccines:

As the World Health Organization explains, “Vaccines are safe”:

Vaccines are safe. Any licensed vaccine is rigorously tested across multiple phases of trials before it is approved for use, and regularly reassessed once it is on the market. Scientists are also constantly monitoring information from several sources for any sign that a vaccine may cause an adverse event. Most vaccine reactions are usually minor and temporary, such as a sore arm or mild fever. In the rare event a serious side effect is reported, it is immediately investigated.

It is far more likely to be seriously injured by a vaccine-preventable disease than by a vaccine. For example, in the case of polio, the disease can cause paralysis, measles can cause encephalitis and blindness, and some vaccine-preventable diseases can even result in death. While any serious injury or death caused by vaccines is one too many, the benefits of vaccination greatly outweigh the risks, and many more illness and deaths would occur without vaccines.

Some of the Cain emails had the following disclosure at the end: “Material Connection Disclosure: The sender of this email may receive compensation for the advertising contained in this message. Any products or services offered by sponsors or advertisers have not been evaluated by Herman Cain and as such no warranty or claims are made.”

Associating with Blaylock has previously been toxic for a Trump-affiliated politician. In 2014, right-wing commentator Scott Brown, a former Massachusetts senator who is now Trump’s ambassador to New Zealand and Samoa, dropped Newsmax as an email advertising partner after he was criticized for sending sponsored advertising from Blaylock to his mailing list.

"The 7 Deadly Drugs the U.S. Government can't wait for you to swallow”

Cain sent a sponsored email from the Health Sciences Institute which claimed that “an insider near Washington D.C. has just blown the lid off the 7 Deadly Drugs the U.S. Government can't wait for you to swallow.” The email assured readers that it's not a conspiracy theory since the “whistleblower has concrete evidence 'the powers that be' are shoving pure poison down your throat... and laughing all the way to the bank, while you're carted off to the graveyard. ... P.S. You won't believe what innocent little pill rounds out the list at #1. If you're taking it regularly, you're 530% more likely to die TONIGHT.”

Mother Jones’ Tim Murphy wrote a 2015 article about the scammy practices of the Health Sciences Institute, which publishes a subscription newsletter. He reported:

Last year, a man named Brian Chambers announced a world-changing advance: An international research organization called the Health Sciences Institute had found an incredible cure for cancer hidden in the Book of Matthew. For just $74, you, too, could discover the secret.

That was the breathless pitch emailed to hundreds of thousands of [former Arkansas Gov. Mike] Huckabee’s followers in January, beneath a “special message” from the Republican presidential candidate trumpeting “important information.” Upon closer inspection, the divine remedy—eating fewer carbs—was never recommended by St. Matthew. Chambers is not a doctor, and the studies on starvation diets he cited make no mention of “cures.”

The Health Sciences Institute is part of a company called NewMarket Health, which is just one asset of a Baltimore-based publishing empire named Agora Inc. Agora’s subsidiaries and affiliates publish more than 40 newsletters and sell more than 300 books on a range of topics, including biblical health tips, natural-healing supplements, and “insider” investment advice—a mix of ideas the company considers the intellectual equivalent of the marketplace of ancient Athens. To find new readers for its ever-expanding catalog of publications, Agora’s subsidiaries have tapped into a network of conservative heavyweights, including Huckabee, Ron Paul, and Newt Gingrich, who sell access to their massive email lists to advertise Agora’s products.

Cain sent a sponsored email from a group called Laissez Faire in 2015 and 2016 which falsely suggested that doctors have found a cure for Alzheimer’s disease. (The advertising campaign, which appears to have been aimed at selling newsletter subscriptions, has been discontinued and the landing page no longer exists.) 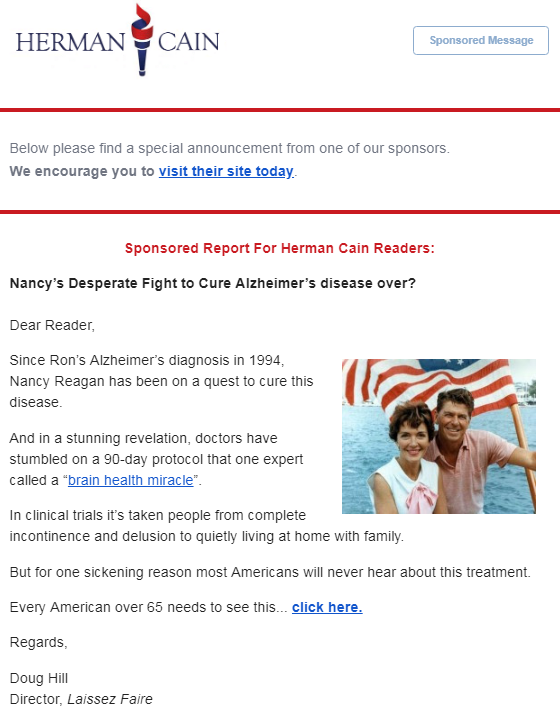 Cain also sent emails in 2015 and 2016 from Laissez Faire with the subject line, “Must see: Alzheimer’s Mystery Finally Solved?”

Laissez Faire is another Agora-affiliated company that sells a subscription-based newsletter which claims to show readers “how to live a happy, healthy, and wealthy life.” It also publishes a newsletter called Natural Health Solutions, which uses Nancy Reagan (“Nancy’s 90-Day Protocol”) in advertising materials in an attempt to gain subscribers.