Update (8:15 p.m.): In an interview with Reuters, President Trump said “I won’t mention names but when they take certain people off of Twitter or Facebook and they’re making that decision, that is really a dangerous thing because that could be you tomorrow."

“I won't mention names but when they take certain people off of Twitter or Facebook and they're making that decision, that is really a dangerous thing because that could be you tomorrow.” https://t.co/fL9MIddHNN

The conspiracy theory that social media companies are censoring conservatives got a boost this weekend when President Donald Trump took to Twitter to complain. 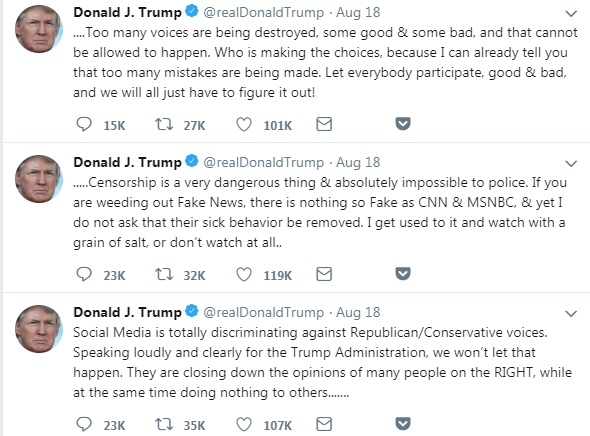 Trump is just whining about social media censorship (on social media) to push for more favorable conditions on the platforms. As I’ve written before, realistically,  the Trump campaign isn’t going to abandon social media. It needs the platforms to reach voters via targeted advertising. The Trump campaign spent millions on digital ads in 2016, and it will do the same in 2020. But it can badger the platforms in hopes of getting more attention from sales staff and potentially discounted ad buys. The platforms, which stand to make millions from Trump and GOP ad buys in 2018 and 2020, are going to feel the pressure to keep the campaign -- and the GOP overall -- happy.

Other users pointed this out to him, but as of this writing, the tweet is still live.

Another day, another example of conservatives being censored on social media. @jack easy fix: explain to Congress what is going on. #StopTheBias cc @IngrahamAngle pic.twitter.com/QjzpmfadXS

Fox News is also all-in on the debunked narrative. Turning Point USA spokesperson Candace Owens showed up on the network multiple times over the weekend to talk about the matter. Fox & Friends spent the weekend portraying conservatives as victims of social media.

Here’s the problem. The claim of social media censoring conservatives has been pretty thoroughly debunked. Back in May 2016, a report claimed that conservative outlets and stories were “blacklisted” from Facebook’s Trending Topics section. Facebook CEO Mark Zuckerberg met with conservatives, including a representative from Trump's 2016 campaign. And a subsequent internal investigation revealed “no evidence of systematic political bias” in the Trending Topics section. When the GOP started clamouring about censorship in April of this year -- after right-wing social media personalities Diamond and Silk falsely claimed their content was being censored on Facebook -- they offered no credible evidence. In fact, a report from the social media analytics firm NewsWhip found the opposite: “There are more than three times as many conservative publishers than liberal publishers on Facebook, and they receive more than 2.5 times the engagement on the social media platform than those who push opposing viewpoints,” the report claimed. Media Matters recently released a study of six months’ worth of data conclusively debunking this claim for Facebook pages. It found that right-wing Facebook pages are thriving.

Trump’s tweets came just days after conspiracy theorist Alex Jones begged him for help on air. Other outlets have noted that Trump’s tweets could be interpreted as a defense of Jones, who has been banned from multiple platforms.

Meanwhile, Republicans continue to harp on the conservative censorship conspiracy theory as a way to rally their base. Trump’s tweets this weekend are part of that overall strategy. But if Trump and the GOP are going to continue crying wolf, reporters should start asking if they’re talking about conservatives or Alex Jones and his ilk of hatemongers and conspiracy theorists. If the GOP wants to stand up for Jones’ right to harass the Sandy Hook families and spread hate, the party should feel comfortable naming him as the cause for complaint.