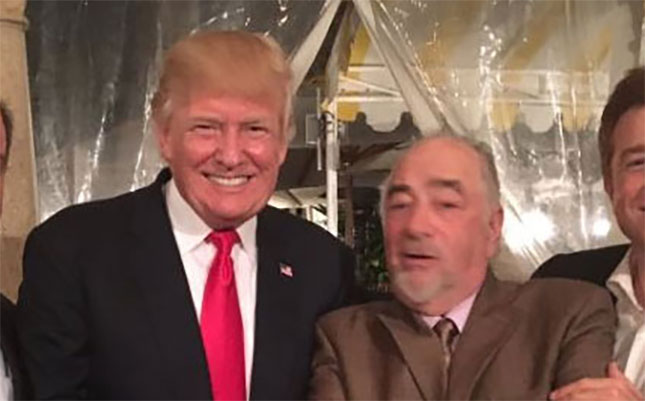 Michael Savage, a radio host whom, according to Vice President Mike Pence, President Donald Trump “appreciates ... respects and admires,” echoed Fox contributor Nigel Farage’s suggestion that “World War II-style internment camps may be the answer” to terror attacks, noting that he “said the same thing a few weeks ago.”

Savage, a bigoted conspiracy theorist, has a close relationship with Trump, frequents his Mar-a-Lago Florida property, and once claimed that he was “the architect of Trump’s messaging.” Savage, who has previously called for “kill[ing] 100 million” Muslims, was one of the first right-wing media figures to openly and repeatedly question former President Obama's birthplace and religion and has a history of promoting bizarre conspiracy theories about murder and diseases.

On his June 5 radio show, Savage reiterated how he “had a big hand in helping Donald Trump ... get his message across and, therefore, getting him elected, and advocated for “World War II-style internment camps” as “the answer” to recent terror attacks. Despite acknowledging that “it is true that most [people interred in WWII] were innocent,” Savage later asked “why don’t you intern” the “1,000” people on the DHS watchlist, adding “how do we know that the internment in World War II didn’t help us win the war?” (emphasis added):

MICHAEL SAVAGE (HOST): Should the government regulate Twitter, Facebook, and the other sites that are being used to communicate by the rats in dirty headscarves who are killing our children? What would you do to stop this? Should Islam immediately be banned from prisons? Well, you can't ban Islam. Isn't it just like Christianity, and Judaism, and Buddhism? No, no it is not.

Ariana Grande gave another concert in Manchester and raised money for -- I don't know what the money was for. Is that a way to fight Islamism? Having another concert? Is that the answer? Of course that's not the answer.

Well, what is the answer? Well, one London politician, one politician from England said we have to put them in camps immediately, and of course CNN wouldn't go for that. British politician says suspected terrorists should be put in camps. Now that will get all of the good liberals in New York very frightened. Nigel Farage, the former UK Independence Party leader, UKIP, said “Britain has been so weak on border control and clamping down on radicalization that World War II-style internment camps may be the answer.” I said the same thing a few weeks ago.

Now, I said the same thing last week. Why are we going soft on Islamists when they're going hard on the West? I'm asking you a question. How much longer are we going to tolerate them killing us and killing our children? The answer is, a very long time, because America is a weak nation, it has been poisoned by many, many different sources.

SAVAGE: Yes, it’s true I had a big hand in helping Donald Trump and get his message across and, therefore, getting him elected. There’s no question about that.

I’m sticking to the subject matter of today: What needs to be done to stop Islamists who are on the watchlist in America right now. We were told there were over 1,000 active cases, that was a few months ago when the FBI was run by what’s his name again, I forgot. The guy who is no longer there, I forgot his name already, Mr. Comey, Mr. Comey. He said he had 1,000 active cases, or DHS did. What does that mean, 1,000 of them are on the list, or there’s more than 1,000? Why don’t you intern all of them before they run people over on a bridge, or stab people in the street? It was done during World War II.

How do we know that the internment in World War II didn’t help us win the war?