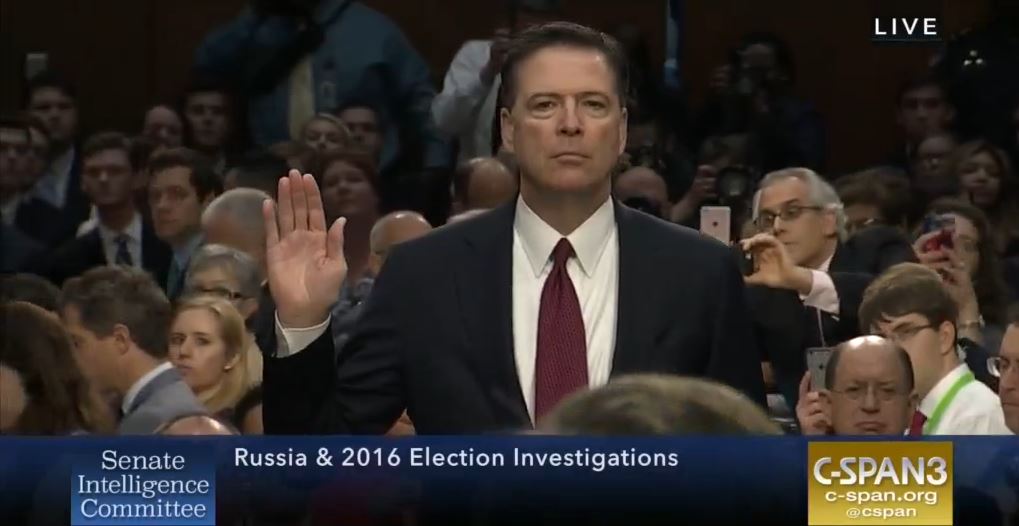 A top constitutional law scholar says President Donald Trump’s Twitter attack against former FBI director James Comey for sharing a memo recounting his meetings with Trump could be seen as “witness intimidation,” while also noting that there is no legal rationale for the president's claims.

This morning, following Comey's June 8 testimony before the Senate intelligence committee, Trump wrote on Twitter: “WOW, Comey is a leaker!”

Despite so many false statements and lies, total and complete vindication...and WOW, Comey is a leaker!

“I think the claim is utterly frivolous and indeed could be characterized as a form of witness intimidation,” Laurence Tribe, a highly cited constitutional law professor at Harvard Law School, said via email. “The memo in which Comey recorded his recollection of the meeting contemporaneously was not classified. And nothing in the DOJ’s rules or the FBI’s rules barred disclosing that information inasmuch as the conversation wasn’t subject to executive privilege or attorney-client privilege or any other privilege."

At issue is Comey’s revelation during Thursday’s Senate intelligence committee hearing that he had passed on contents of a memo outlining meetings with Trump to a friend, who later gave it to a reporter.

Several conservative media outlets have claimed that such information sharing is illegal, even treasonous or a form of espionage. Trump’s lawyer, Marc Kasowitz, said he planned to file a formal complaint against Comey with the Justice Department, while Trump himself adopted the right-wing talking point today in his Twitter attack.

But Tribe and other legal experts balked at claims that Comey acted illegally.

"Nothing in it was classified,” Tribe said. “That decision plainly and strongly served the public interest and harmed no legitimate interest of any individual or government institution.”

“There was nothing classified in any of the memos or the testimony given and there is no crime that rises from potentially revealing privileged material,” said Lisa Kern Griffin, a professor at Duke University Law School. “If someone wants to voluntarily reveal information, there is no criminal liability.”

Professor James B. Jacobs of New York University School of Law added, “I cannot see any [illegality] in Mr. Comey's making public his own notes on his conversations with President Trump. There was no secret or classified information revealed.”

Geoffrey Stone, a professor at the University of Chicago Law School, agreed: “As I understand the situation, there was nothing unlawful or inappropriate in that action. There was no classified information involved.”

Samuel Gross, a professor at the University of Michigan Law School, also noted that the claims by some that it was privileged information are unfounded.

“Strictly speaking, that is a misnomer,” he said in an interview. “If this was privileged information, which seems unlikely to me, then the president would have the right to assert that privilege to prevent Comey from discussing that information. But he didn’t, his lawyer didn’t, nobody did. It strikes me that the statements that are being made have no basis in law.”