President Donald Trump’s rise in politics has posed new challenges for journalists covering the White House, but for Spanish-language outlets, it has created unique obstacles. As Hispanic Heritage Month comes to a close, here’s a look back at some ways Hispanic media is changing in the Trump era:

1. Racist attacks on Hispanic journalists have intensified. In an illuminating interview on CNN, Henry Gomez, the senior political writer at Cleveland.com, told host Brooke Baldwin that he has “noticed an uptick” in racist insults while covering Trump as compared to his previous decade-plus of experience. He explained that many of the emails and tweets that he receives are “parroting a lot of Donald Trump’s greatest hits,” referring to Trump’s anti-immigrant rhetoric. Gomez’s case is not unique. The conservative Media Research Center launched a literal campaign against Univision’s Jorge Ramos for his coverage of Trump, and Fox News has fed the fire and called for Ramos’ resignation. Other journalists have voiced concerns over the intensifying anti-Latino environment in op-eds and on Twitter. The challenge for Hispanic journalists covering Trump is unique because, according to Cal State Northridge journalism professor Jose Luis Benavides, interviewed by KQED, “if you’re from a Spanish-language news organization … some people may assume you have a built-in bias.”

2. Republicans are giving less access to Spanish-language networks. One of Univision’s top news anchors, Enrique Acevedo, told Politico in March, “It’s harder to get access to Republicans than it is to get access to Democrats and I understand why that is,” noting that it has “happened more since the inauguration.”

A Media Matters review of appearances by elected Republican officials on Univision and Telemundo in both 2014, before Trump launched his political campaign, and 2017 confirmed Acevedo’s observation. During Hispanic Heritage Month 2014, an equal amount of elected Republican officials and elected Democratic officials appeared as guests on Telemundo and Univision’s Sunday news shows. During that same time period in 2017, only two Republicans appeared on the Sunday shows compared to five Democrats. 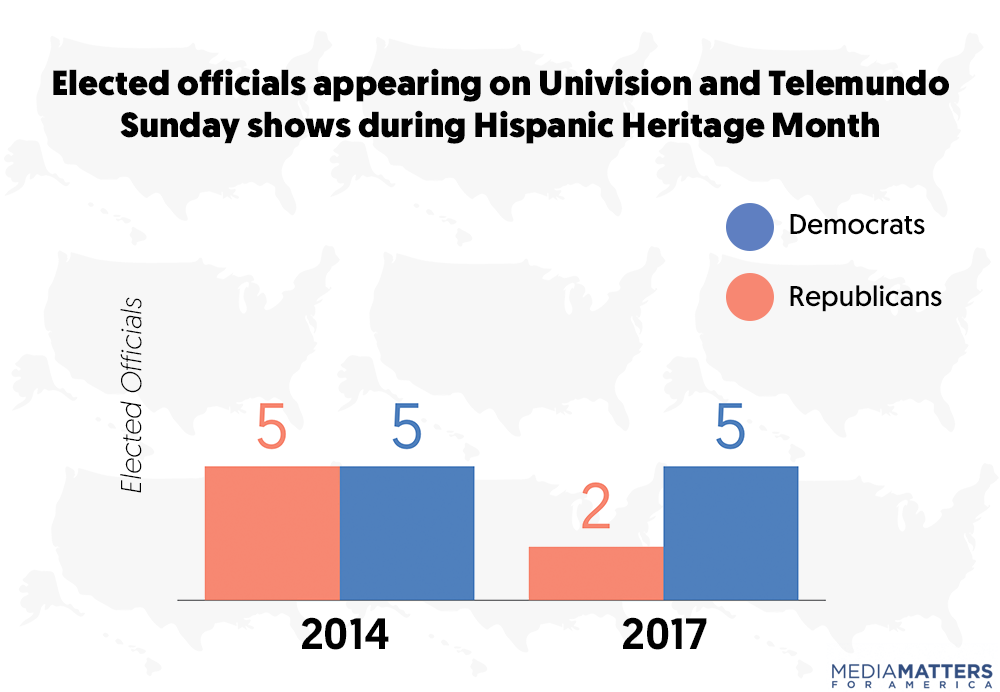 Republicans’ aversion to Spanish-language outlets seems to echo Trump’s attitude toward the networks. As a candidate, Trump denied press credentials to Univision, Telemundo and La Opinion, blacklisted prominent Hispanic journalists, including José Díaz-Balart and Jorge Ramos, and declined an invitation to address the joint convention of the National Association of Black Journalists and the National Association of Hispanic Journalists.

3. Telemundo launched a campaign to empower Latinos to improve their lives. In February, Telemundo launched “El Poder En Ti,” -- which translates into “The Power Within You,” -- a campaign designed to empower Latinos and encourage them to take initiative to improve their lives and the lives of others. Influential news shows such as Enfoque and Al Rojo Vivo presented profiles of Latino immigrants and nonimmigrants who have made positive impacts on their communities.

The shows’ depictions of Latinos as role models, community activists, politicians, innovators, media executives, and philanthropists contrasted with the way that Trump and his media allies typically depict Latinos. In one segment of “Nuestra Gente Extraordinaria” -- which translates into “Our extraordinary people” -- on Enfoque, which was part of the “El Poder en Ti” campaign, National Hispanic Media Coalition’s Alex Nogales recognized this discrepancy, explaining that immigrants are “judges, police officers, lawyers, dentists,” and more, but “media outlets that broadcasted in English treated our community … as if we were all criminals.” This trend is also borne out in right-wing media. As the president continues to disparage Latino immigrants, he counts on his media allies to vindicate his painting them as criminals.