A Media Matters study found that between President Donald Trump’s January 20 inauguration and Tax Day, April 18, evening cable news has dedicated only sporadic coverage to Trump’s failure to release his tax returns. And of the 110 segments spread out over three months, nearly half came within a week after MSNBC’s Rachel Maddow revealed two leaked pages of Trump’s 2005 tax documents. This inconsistent coverage comes as pressure mounts from activists and Republican lawmakers for the president to release his tax returns, and highlights the media’s inability to consistently report on this story.

As Tax Day Approached, Calls For Trump To Release His Tax Returns Increased

NY Times: “More Than A Dozen Republican Lawmakers” Are Calling On Trump To Release His Tax Returns. According to a New York Times report, “a growing roster of more than a dozen Republican lawmakers now say” President Donald Trump should release his personal tax returns as they work to “enact a sweeping overhaul of the tax code.” The Times noted that without information on his finances, some people are worried that tax reform “could be a plot by Mr. Trump to get even richer.” From the April 17 report:

President Trump’s promise to enact a sweeping overhaul of the tax code is in serious jeopardy nearly 100 days into his tenure, and his refusal to release his own tax returns is emerging as a central hurdle to another faltering campaign promise.

As procrastinators rushed to file their tax returns by Tuesday, the White House press secretary, Sean Spicer, emphasized again on Monday that Mr. Trump had no intention of making his public. Democrats have seized on that decision, uniting around a pledge not to cooperate on any rewriting of the tax code unless they know specifically how that revision would benefit the billionaire president and his family.

And a growing roster of more than a dozen Republican lawmakers now say Mr. Trump should release them.

[I]t is Mr. Trump’s own taxes that have provided the crucial leverage for his opponents. More than 100,000 of his critics took to the streets over the weekend in marches around the country, demanding that the president release his returns. Tax legislation, they say, could be a plot by Mr. Trump to get even richer.

“When they talk about tax reform, are they talking about cutting Donald Trump’s taxes by millions of dollars a year?” asked Ezra Levin, a member of the Tax March executive committee. “We don’t know.”

Beyond the politics of Mr. Trump’s returns, lawmakers do not want to pass an overhaul of the tax code that unwittingly enriches the commander in chief and his progeny. Those who are worried about conflicts of interest point to the potential repeal of the estate tax or elimination of the alternative minimum tax as provisions that would enrich Mr. Trump. [The New York Times, 4/17/17]

ABC News: Tax Day Protesters Called On “Trump To Release His Tax Returns.” ABC News reported that “Thousands of protesters at Tax Day marches Saturday in cities from Washington, D.C., to Denver to Los Angeles are calling on President Trump to release his tax returns.” From the April 16 ABC News report:

Thousands of protesters at Tax Day marches Saturday in cities from Washington, D.C., to Denver to Los Angeles are calling on President Trump to release his tax returns.

Trump is the first U.S. president and the first major party nominee in four decades to refuse to release his full tax returns to the public.

Organizers said the protests, dubbed the Tax March, were scheduled in nearly 150 cities, and stemmed from the women's march that took place the day after Trump's inauguration. 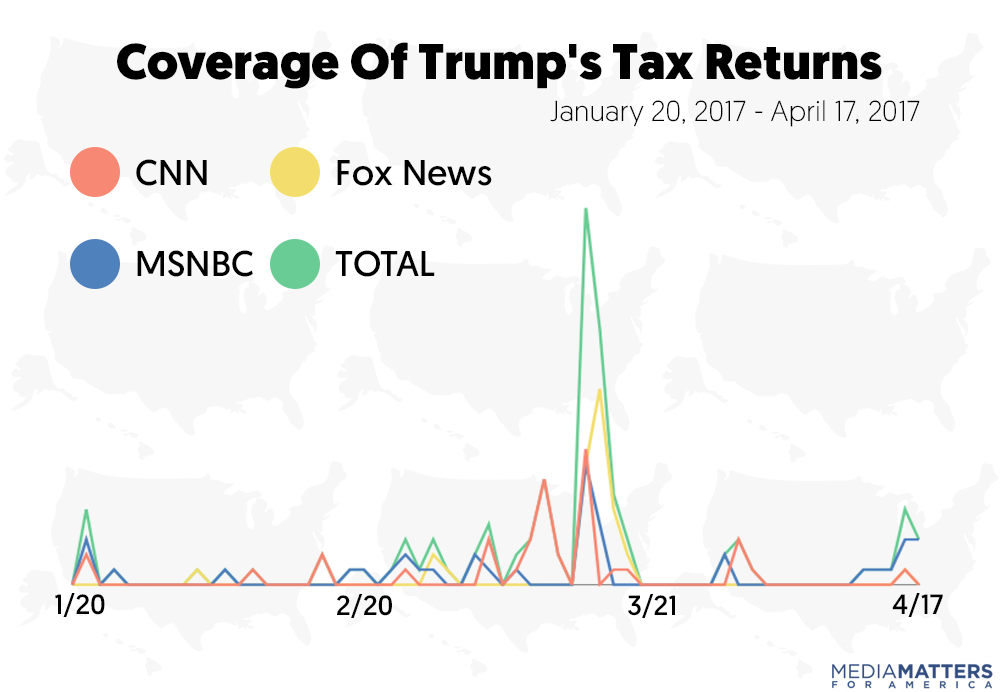 But Nearly Half Of All Segments On Trump's Undiclosed Tax Returns Took Place Within A Week Of Maddow’s Reveal Of Trump’s Leaked Tax Documents. Fifty-one of the 110 segments took place within a week after MSNBC’s Rachel Maddow revealed a small portion of Trump's 2005 federal tax return on March 14. Twenty-eight of Fox’s 33 segments took place between March 14 and 17. Eleven segments out of CNN’s 38 and 12 out of MSNBC’s 39 took place during that same time period.

According to Steven Rosenthal, senior fellow at the Tax Policy Center of the Urban Institute and the Brookings Institution, however, Spicer’s point about the president being audited does not justify Trump’s refusal to release his 2016 tax return.

“Donald Trump’s tax returns will be under audit because the IRS audits the returns of every president,” Rosenthal told Salon. When asked if this was a sufficient explanation for Trump not releasing his tax returns, Rosenthal said “No, of course not.”

Since Richard Nixon’s time in office, every president has released his tax returns shortly after filing them.

“In my view Mr. Trump has a responsibility to share his tax returns to give transparency to the American public,” Rosenthal said. “It’s been a longstanding tradition for presidents to undertake that responsibility and Mr. Trump is not.”

He added, “There is no legal impediment to somebody who is under audit releasing taxes and as I mentioned earlier the IRS audits every single president and vice president on their tax returns. If he continues to follow the policy of not releasing his tax returns while under audit, then we’ll never see any of these tax returns.” [Salon, 4/17/17]

Media Matters searched Nexis transcripts for mentions of Trump within 50 words of either tax or tax return from 5 p.m. to 11 p.m. on CNN, MSNBC, and Fox News between January 20 and April 18. Segments were included in this study if they included a significant discussion of Trump’s tax returns. “Significant discussion” is defined by a back-and-forth exchange between two or more people. Pre-taped interviews where there was no significant dialogue between the reporter and guest were excluded from the analysis. Reruns of interviews from previous programming were excluded from the analysis.