Is it true that “nearly 200,000 Florida voters may not be citizens?” No, but that didn’t stop some prominent conservative social media accounts -- including that of the president’s son -- from spreading a since-debunked 2012 story making that claim.

To understand how this happened, it’s good to know a little background about Florida’s brush with “anti-fraud” initiatives in recent years.

In May 2012, Florida Secretary of State Ken Detzner announced a partnership between the Florida Department of State and Florida Department of Highway Safety and Motor Vehicles to remove possible noncitizens from the state’s voter rolls ahead of that year’s election. The departments would cross-check data with each other for voter inconsistencies, flag them, and send them to the state’s Supervisors of Elections for review and, if needed, removal of registrations.

It was a massive debacle. What began as a review of roughly 2,600 possible inconsistencies at the time the partnership was announced had ballooned to nearly 182,000 names within days. That’s when NBC Miami ran with the somewhat sensational headline “Nearly 200,000 Florida Voters May Not Be Citizens.”

But the system was embarrassingly rife with false positives, leading to a lawsuit over the disenfranchisement of U.S. citizens who were removed but actually eligible to vote. In the end, out of those 182,000 names, just 85 were found to be ineligible -- an error rate of 99.95 percent. The following year, the state enrolled in Crosscheck, the interstate anti-fraud program championed by Kansas Secretary of State Kris Kobach. Similar to the results of Florida’s 2012 in-state program, Kobach’s Crosscheck program also “gets it wrong over 99 percent of the time,” a Washington Post analysis concluded. In April 2014, Florida exited the Crosscheck program, only to later accidentally release the partial Social Security numbers of nearly 1,000 Kansas voters.

In all, the “nearly 200,000 Florida voters may not be citizens” story turned out to be just 85 ineligible voter registrations. But why let the truth get in the way of a good story?

This week, as conservative media push the unfounded idea that the current election in Florida is being “stolen,” this old story that confirmed all their worst fears seemed too good to be true: And it was.

We know by now that most people simply don’t read past the headline of stories they see in their social media feeds. And headlines suggesting that there are an equivalent number of noncitizens voting illegally in Florida as there are people living in Tallahassee are eye-catching. That would be outrageous to people on any end of the political spectrum. But even based on the facts known at the time, the story wasn’t quite accurate.

Rounding “nearly 182,000” up to “nearly 200,000” is a needless inflation of even the most sensationalized true version of the story, and saying “voters might not be citizens” suggests that these people have actually voted -- when the numbers actually refer to voter registrations. Both points probably could have been more artfully and accurately addressed in the original headline. Also, the word “might” is doing a lot of work here.

It’s those small embellishments that made the story perfect for the era of weaponized headlines.

The NBC headline, as some might say, aged poorly. And here’s how it spread:

On November 10, the link was shared in a number of pro-Trump Facebook groups. On Twitter, the story got a boost from Instapundit, a conservative account which has more than 105,000 followers:

Nearly 200,000 Florida Voters May Not Be Citizens https://t.co/FRBbgyKCVh via @nbc6

A bit later, David Wohl, attorney and occasional Fox News guest, shared it on Twitter to his more than 26,000 followers.

Florida has become a Banana Republic right in our own back yard. https://t.co/6KeUeBx2bE via @nbc6

By the next day, commentator and conspiracy theorist Pamela Geller had published a blog post, in which she put the entire text of the NBC report, swapping out the article’s actual publication date (May 11, 2012) with November 10, 2018.

Nearly 200,000 Florida Voters May Not Be Citizens: #VetEveryVote Now is the time to drill down on the Democrat's war on free and fair elections. #VoterFraud https://t.co/M5Thfu71kd pic.twitter.com/gNOfFWmG7r

Harlan Hill, a member of the Trump 2020 campaign advisory board, tweeted, “200,000 non citizens voting in Florida!?!? But I thought Democrats said voter fraud was a myth? We have got a SERIOUS problem on our hands. #StopTheSteal #MAGA”

But I thought Democrats said voter fraud was a myth? 🤔

We have got a SERIOUS problem on our hands. #StopTheSteal #MAGA 🇺🇸 https://t.co/U37I3wR5U0

Then, in a since-deleted tweet, Turning Point USA’s Charlie Kirk wrote, “This is an absolute disgrace to our country. Foreign interference in our elections. Every single one of these people should be arrested, deported, and never allowed reentry. RT to spread this!” 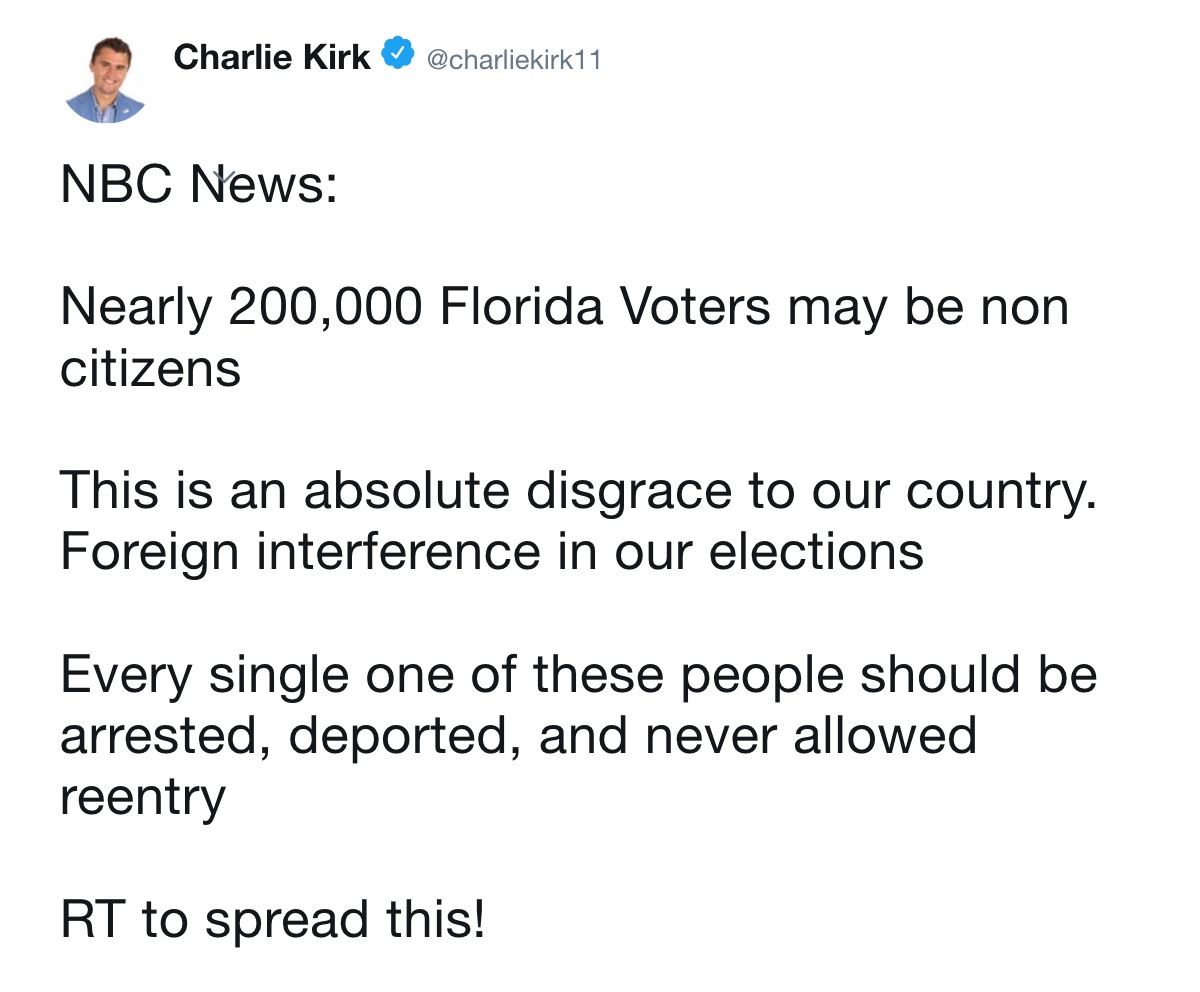 And finally, Donald Trump Jr. tweeted the link out, adding, “Amazing, but not shocking at all anymore.”

Amazing, but not shocking at all anymore. Nearly 200,000 Florida Voters May Not Be Citizens https://t.co/8HiObPLeeM via @nbc6

Townhall.com also published a story on the topic that, while updated, still maintains that “200,000 non-citizens might have voted in the state's elections” in 2012.

While it’s hard to put the #FakeNews (like, you know, actual fake news) toothpaste back in the proverbial tube, one woman tried, and she was actually kind of successful at it.

Brooke Binkowski is a former managing editor at Snopes, and she currently runs the fact-checking site TruthOrFiction.com. When she saw the post begin to spread, she took quick action. First, she tweeted at people who might have known the article was old and didn’t accurately represent how that story concluded but shared it anyway “for approval and to fit in,” hoping to convince them to delete their posts and stem the spread of misinformation.

“That headline hijacks intellect and goes straight to the amygdala if you’re fearful,” she tells me over a Twitter direct message. “‘Oh no! 200,000 non citizens trying to STEAL OUR ELECTION! they're gonna turn this country into a banana republic!’ and whatever else people think when they're too busy to click on the story.”

When that didn’t work, she called the NBC station that ran the original story in hopes of getting the staff to update the article to reflect that it isn’t a current story. She explained the situation as best as she could, asking the station to add “STORY FROM 2012:” in the headline so it would show up in shares across social media.

“Clickbait is one thing, but when you are actively interfering in what should be an open electoral process -- as I said in my email to them -- that’s quite another,” she adds. She continued:

People don't realize how much damage buffoons like Jacob Wohl and Gateway Pundit and Donald Trump Jr. and all the rest of those people can do. They push this completely idiotic stuff and then it gets laundered by bots and turned into a story that's used to influence policy. It's now crystal clear that's what they are doing and that it is semi-coordinated, that there's a network of people who are pushing all this information to make it seem respectable, and they are mixing a little tiny bit of truth in to make it seem plausible.

NBC Miami did end up updating the headline, adding “2012 Election:” at the very beginning. It also added an editor’s note at the top of the article:

The initial list of 180,000 names was whittled to 2,625, according to the Florida Department of State. The state then checked a federal database and stated it found 207 noncitizens on the rolls (not necessarily voting but on the rolls). That list was sent to county election supervisors to check and it also turned out to contain errors. An Aug. 1, 2012, state elections document showed only 85 noncitizens were ultimately removed from the rolls out of a total of about 12 million voters at that time.

While the story continues to be shared on social media as fresh news, the updated headline and editor’s note do seem to have had the effect of cooling its spread among influencers. Plus, the added context, including the disparity between “nearly 200,000” figure and the actual total of 85, has given people a way to quickly understand the facts of a somewhat complicated local story.

Binkowski stresses that it’s important to understand that there are a lot of people who simply are not making statements or arguments in good faith. “If you are a news person, please be aware of this cycle and your massive responsibility. If you are a news executive, please pay your journalists a living wage,” she said, noting that “they are up against something new and nightmarish and trying to inoculate the world against it and could use all the support they can get.”