In the lead-up to the election, prime-time news shows functionally abdicated any role in questioning what President-elect Donald Trump will offer in place of the Affordable Care Act (ACA) and how it might affect the millions of Americans who gained insurance coverage as a result of the landmark law. Instead of asking pointed questions about Trump’s piecemeal policy proposals, TV personalities focused on negative stories like the 2017 premium hikes and conservative fearmongering about the potential of a so-called “death spiral.” Going forward, media figures must make “What is Trump’s replacement plan?” their first question in any discussion of health care policy and ask necessary follow-ups to pin guests to substantive proposals. 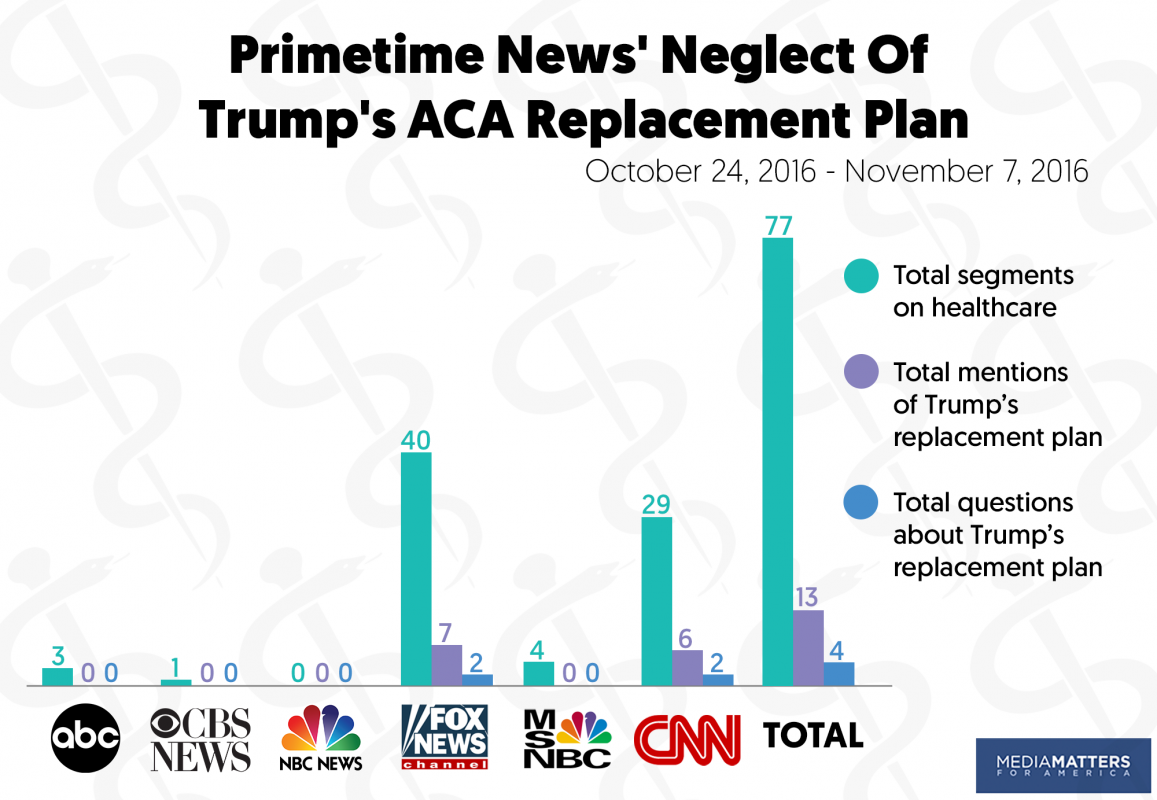 According to a Media Matters analysis of broadcast and cable evening news coverage from October 24 to November 7, TV personalities asked questions about Trump’s potential ACA replacement plans only four times amid 77 total discussions of health care. In total, TV personalities, panelists, and reporters mentioned Trump’s health care plans 13 times, and these mentions occurred exclusively on cable shows, revealing a serious deficit in broadcast coverage of health care in the last weeks of the election. Compounding the problem, nine of the 13 mentions came from either Fox News or a Trump surrogate (like Corey Lewandowski or Kellyanne Conway) on CNN, meaning right-wing media spin dominated the limited substantive discussions of Trump’s plans.

Media figures’ failure to probe politicians and surrogates on Trump’s plans kept important context out of the health care discussion. For example, during a panel segment on CNN Tonight, correspondent Corey Lewandowski insisted that “Trump has laid out a plan” to let individuals “buy health insurance across state lines,” calling it a “simple solution.” CNN host Don Lemon asked no follow-up questions -- problematic given the numerous critiques of the “state lines” proposal -- and instead changed the subject. Hosts must be prepared with the facts on proposed policies and hold guests accountable for explaining the impact of those policies. Permitting conservative talking points to stand unchallenged allows conservative misinformation to fill the void in a confusing policy arena that is poorly understood by the American public.

Coverage of health care in the last two weeks of the election largely focused on the news of double-digit premium increases next year on average for insurance plans sold on Obamacare’s online marketplace at Healthcare.gov. As Trump used this news to make his pledge to “repeal and replace” a focus of his closing campaign, news coverage failed to ask important questions about his idea to keep the popular parts of the ACA -- like prohibiting insurers from discriminating against individuals with pre-existing conditions -- while getting rid of other provisions. Instead, TV personalities focused on the premium hikes and fearmongering about the potential for a “death spiral.” The focus on negative news like premium hikes makes sense -- it was an important story that deserved coverage. But that coverage completely eclipsed almost any substantial discussion of what Trump’s replacement plan might include -- a trend reflected in the broader failure to engage in much of any policy discussion throughout the election.

The overall lack of coverage about the specifics of Trump’s replacement plan represents a fundamental problem in media’s treatment of health care policy and must quickly change now that Trump is the president-elect. A recent study from the Urban Institute showed that 24 million people will lose health care coverage by 2021 if Congress repeals the ACA. Trump’s nominee for secretary of health and human services, Tom Price, is a known foe of the law’s birth control mandate, a regulation that has dramatically reduced out-of-pocket health care costs for women and massively expanded contraceptive coverage. Repeal could also roll back the gains made in reducing the budget deficit, extending the life of Medicare, and lowering health care costs that resulted from the implementation of the ACA.

While no concrete plan for a replacement currently exists -- due to Republican infighting -- repealing Obamacare remains a top priority for the incoming Trump administration. Journalists must start asking questions about what a replacement plan will look like, how it will affect millions of Americans who gained coverage under the ACA, and what its true goals are. Every interview or panel segment about health care must begin with the question, “What is Trump’s replacement plan?” and include aggressive follow-ups about how it would function in order to hold the Trump administration accountable and educate the American public on the future of health care in the United States.

Media Matters conducted a Nexis search of transcripts of weekday network broadcast evening news programs on ABC, CBS, NBC, and PBS and weekday prime-time news programming (defined as 6 p.m. through 11 p.m.) on CNN, Fox News, and MSNBC from October 24, 2016 (the day the Obama administration announced the premium hikes), through November 7, 2016. We identified and reviewed three types of segments -- news reports, panel segments, and interviews. We searched for “Obamacare” or “Affordable Care Act” or “health care” and identified and reviewed all segments in which health care/ACA/Obamacare was the stated topic of discussion, or health care/ACA/Obamacare was discussed by at least two speakers in the segment (e.g., a host asking a single question about the ACA to a guest and the guest responding during a multitopic interview would count).