Users on “The_Donald,” a prominent subreddit for supporters of President Donald Trump that was recently quarantined because of threatening posts against law enforcement and elected officials, repeatedly demeaned and threatened LGBTQ people during Pride Month. Despite Reddit’s policy barring content that “threaten[s], harass[es], or bull[ies],” users posted messages claiming “fags” are “very sick mentallly,” a “cancer to society” that can “infect people” via “AIDS spreading madness,” writing that “gay people reproduce by molesting children,” and claiming that homosexuaility is a “sexual perversion” of “degenerates.” Some users also suggested that their anger at LGBTQ people’s “bullshit” could “turn into something ugly,” and one user wrote that “when a monkey turns gay, most other monkeys in the colony will try to kill it” because it is “viewed as sick and contagious.”

We do not tolerate the harassment of people on our site, nor do we tolerate communities dedicated to fostering harassing behavior.

Harassment on Reddit is defined as systematic and/or continued actions to torment or demean someone in a way that would make a reasonable person conclude that Reddit is not a safe platform to express their ideas or participate in the conversation, or fear for their safety or the safety of those around them.

Being annoying, vote brigading, or participating in a heated argument is not harassment, but following an individual or group of users, online or off, to the point where they no longer feel that it's safe to post online or are in fear of their real life safety is. [Reddit, accessed 7/9/19]

Reddit has previously taken action regarding multiple subreddits that violated its policies. Reddit “shut down several Nazi and white supremacist subreddits” in 2017 after its policy came into effect, according to The Verge. In 2018, the site banned the largest subreddit dedicated to the QAnon conspiracy theory, citing “repeated violations of the terms” of its content policy, NBC News reported, noting that the forum was “host to a stream of violent threats.” And on June 20, the platform banned the subreddit “r/frenworld,” which “featured racist and anti-Semitic Pepe the Frog-style cartoons,” with a spokesperson saying it “violated rules against encouraging and glorifying violence,” according to The Daily Beast reporter Will Sommer. [The Verge, 10/25/17; NBC News, 9/12/18; Twitter, 6/20/19]

Reddit quarantined “The_Donald” in June after users issued calls for violence against law enforcement and public officials. In June, Reddit quarantined “The_Donald” after a Media Matters report found multiple comments on the subreddit calling for, or glorifying, violence against law enforcement and elected officials -- a clear violation of Reddit’s policy. The quarantine restricts the subreddit so it cannot be “accidentally viewed by those who do not wish to do so” because its contents are “extremely offensive or upsetting to the average redditor.” [Media Matters, 6/24/19, 6/26/19]

Reddit has multiple subreddits fostering extremism. Multiple subreddits on Reddit continue to foster extremism, such a subreddit that was created due to Gamergate, a subreddit focused entire around conspiracy theories that has pushed Pizzagate, and multiple subreddits focused around “men’s rights.” A recent study, according to Wired, found that “misogynist rhetoric” on Reddit “has been increasing in frequency and violence, especially since 2016.” [BuzzFeed News, 10/30/14; Polygon, 11/2/17; The New Yorker, 4/22/19; Wired, 7/10/19]

Users on the subreddit posted comments suggesting being LGBTQ was a mental disorder or perversion or that LGBTQ people are degenerates. 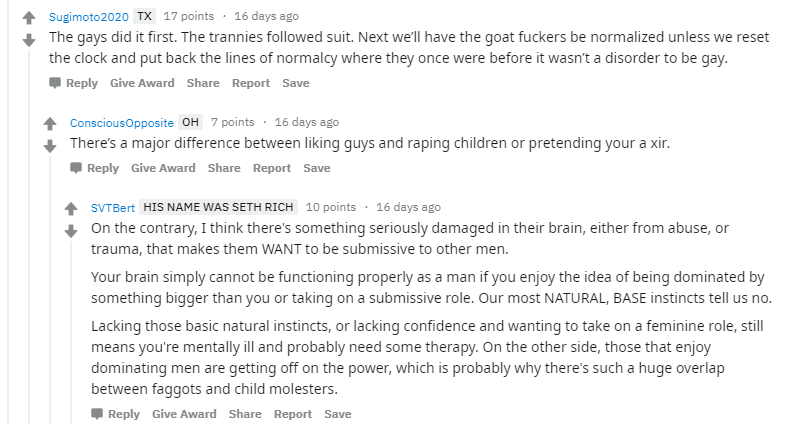 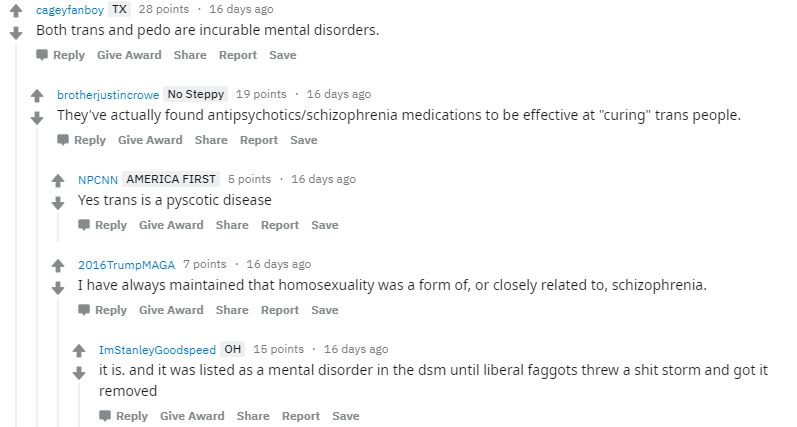 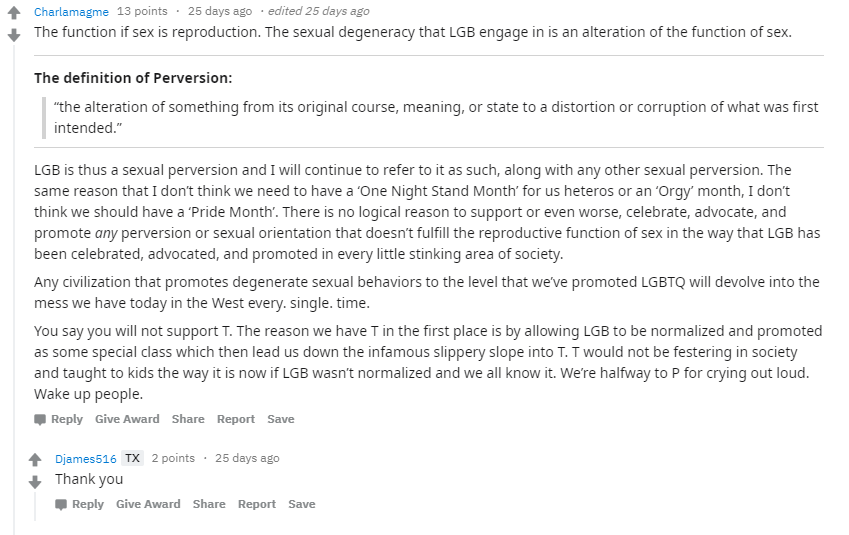 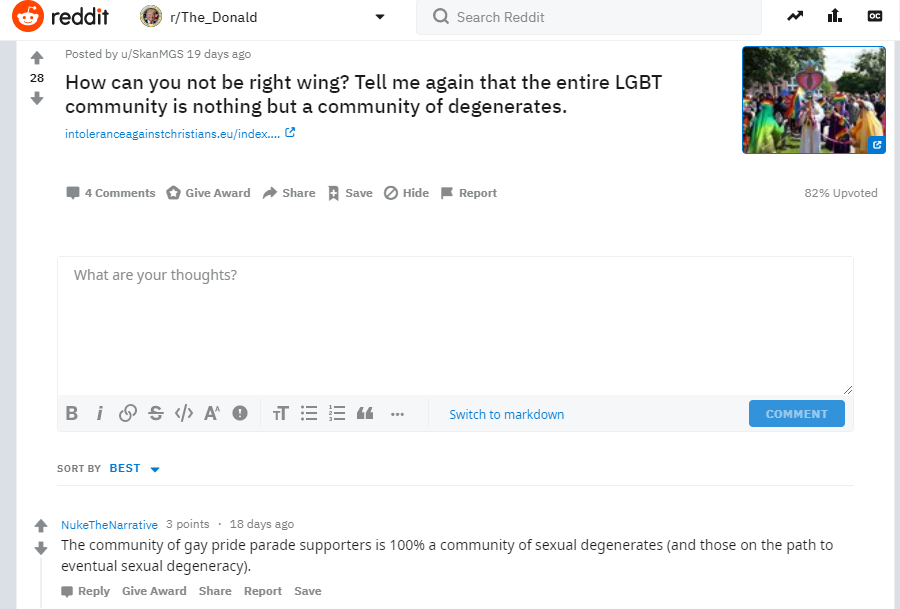 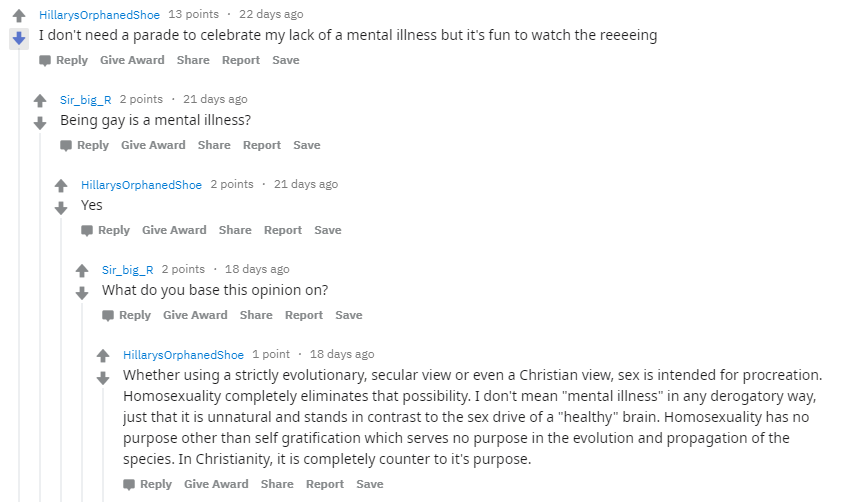 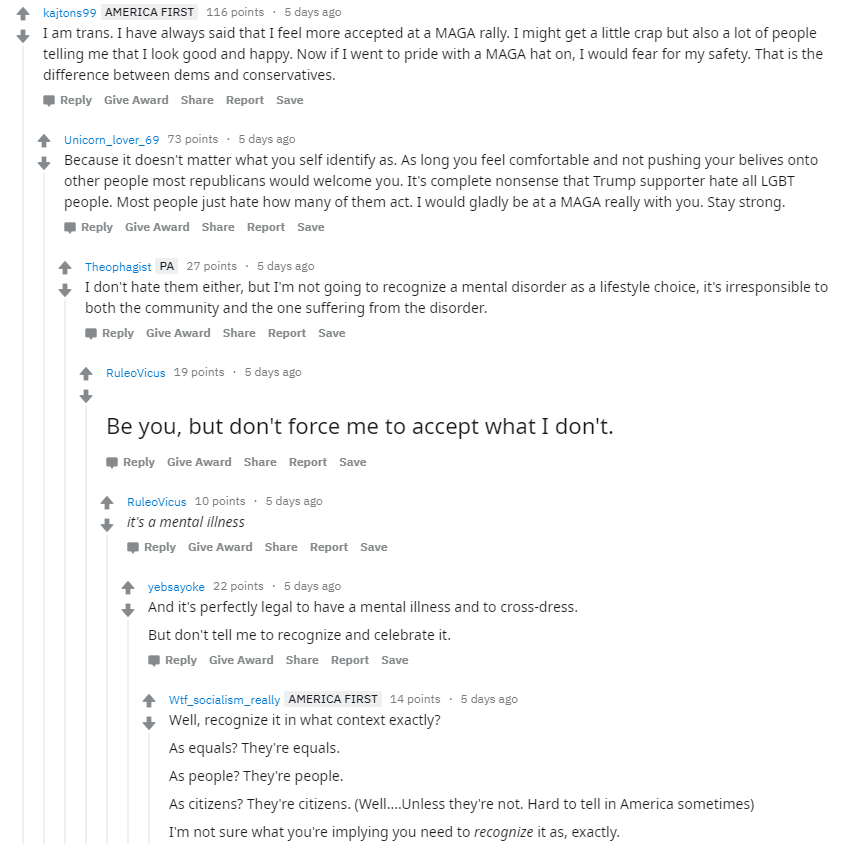 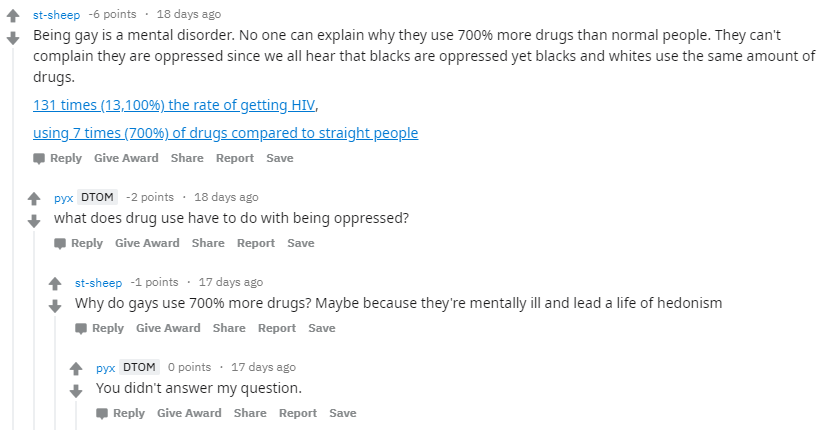 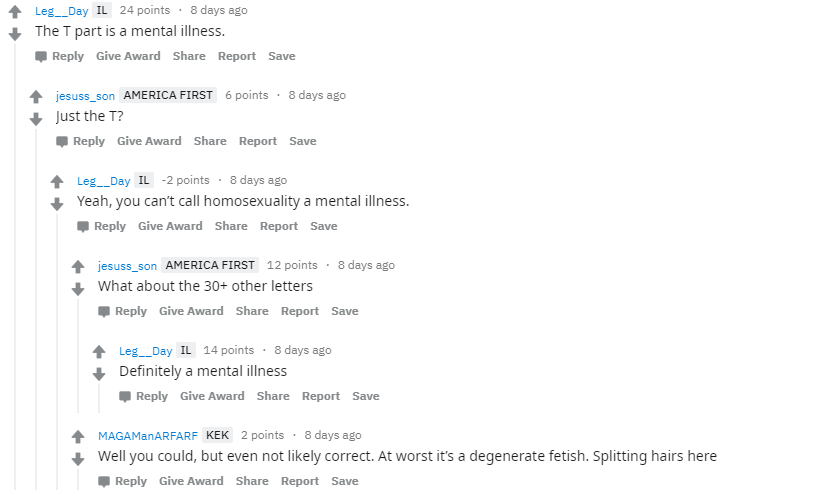 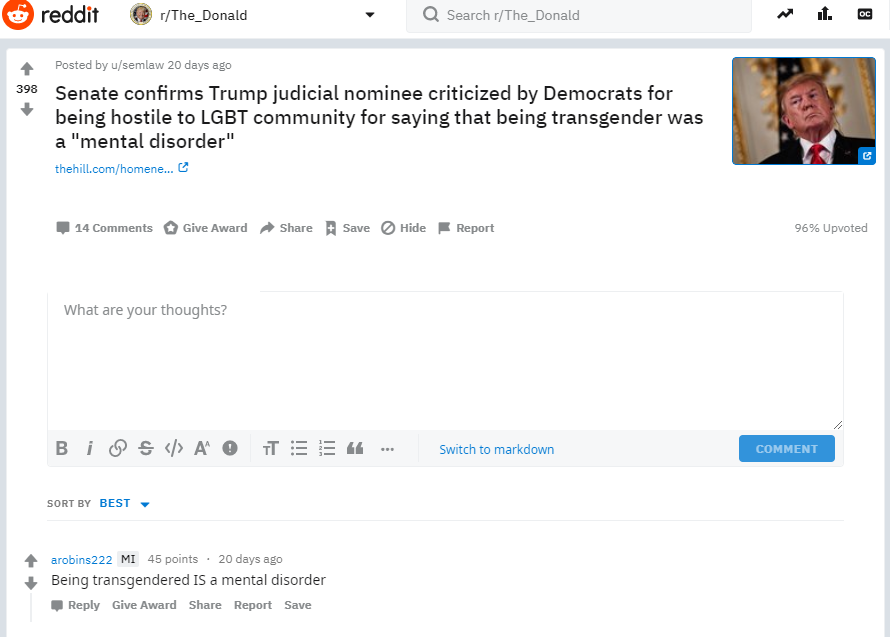 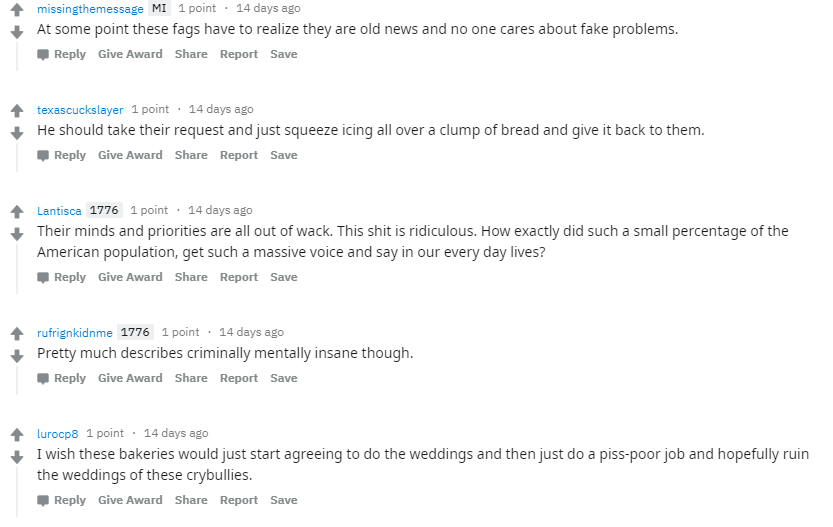 Users on the subreddit posted comments suggesting being LGBTQ is harmful to society. 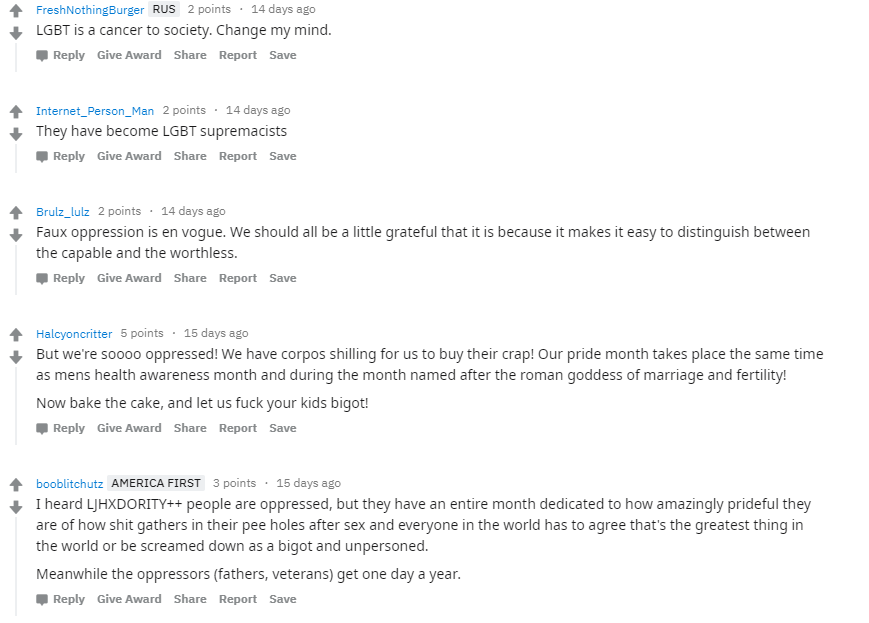 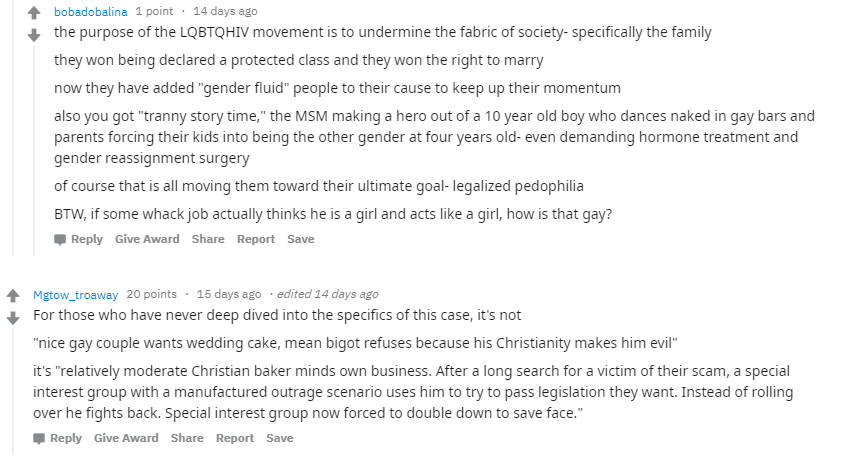 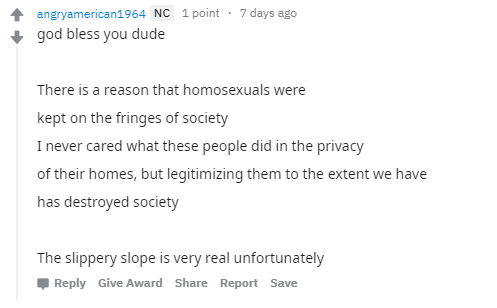 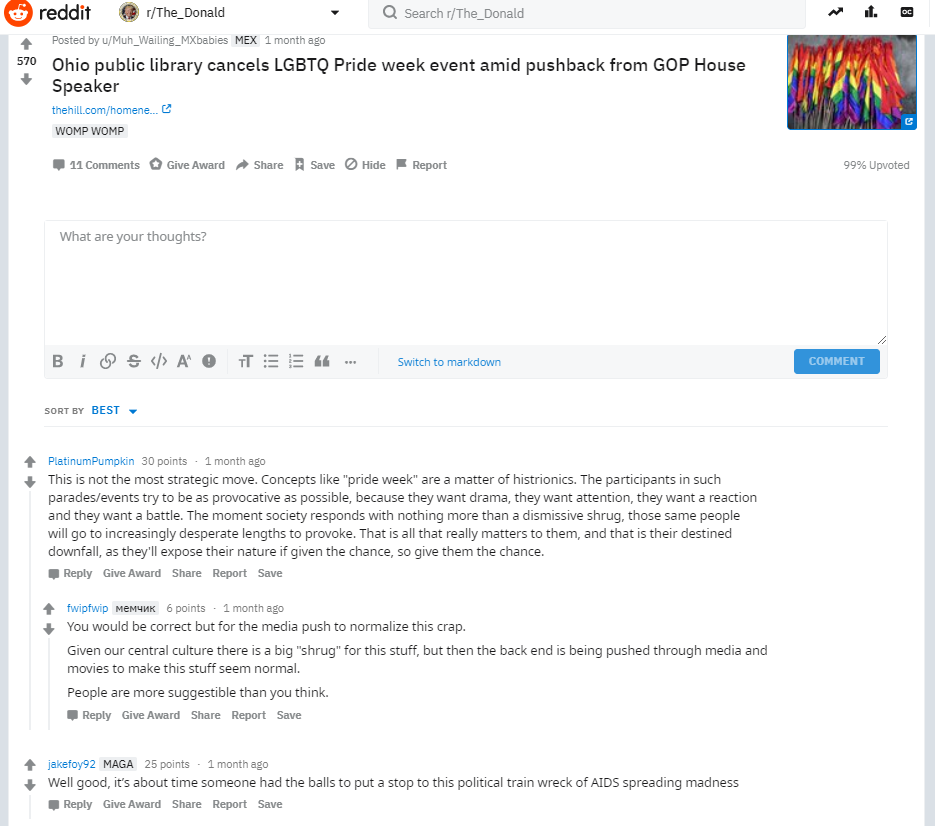 Users on the subreddit posted comments likening or connecting the LGBTQ community to pedophilia. 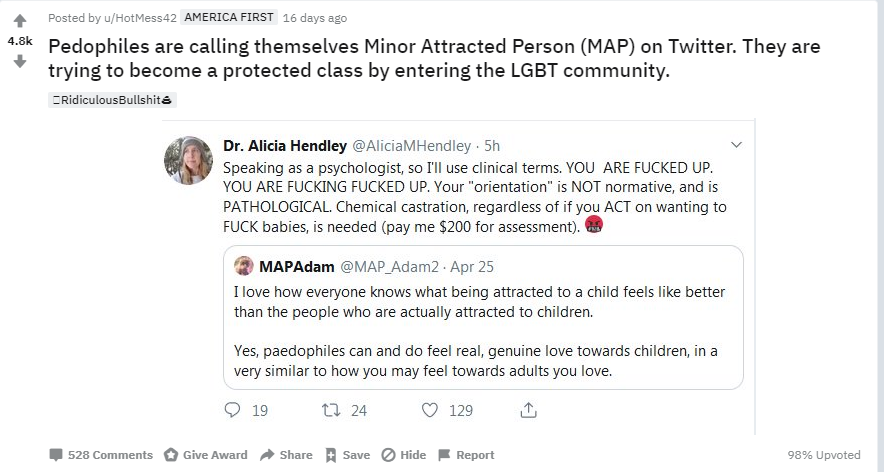 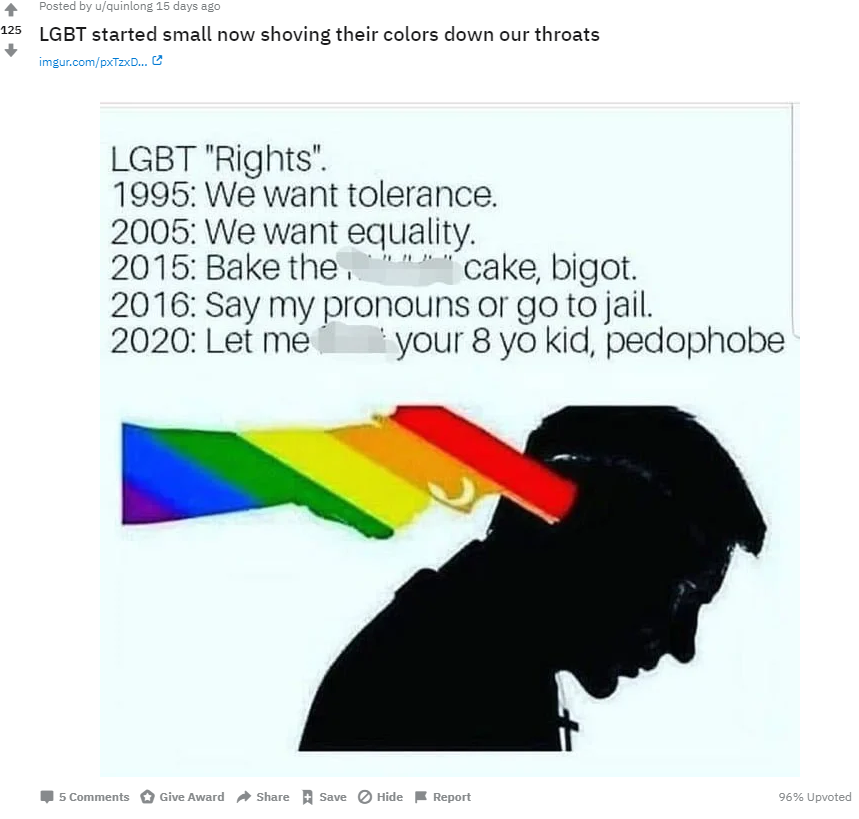 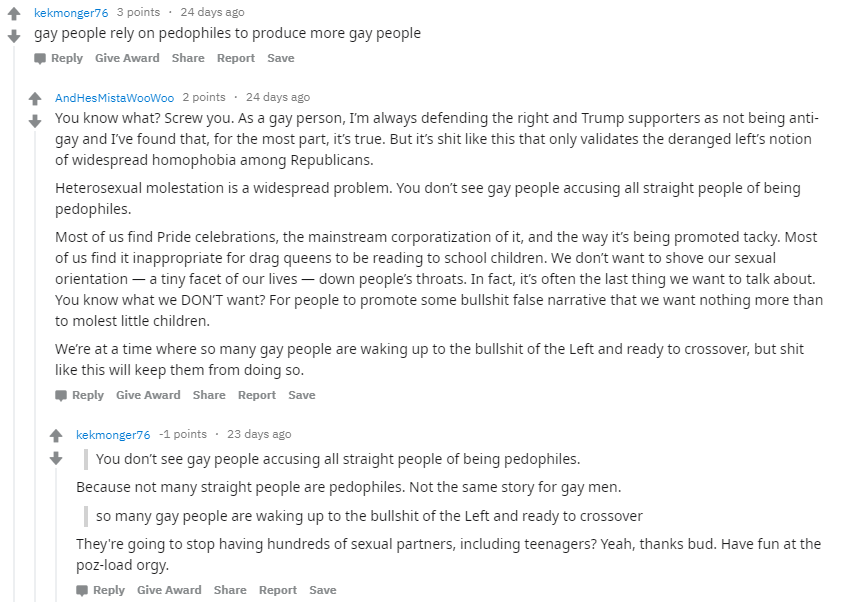 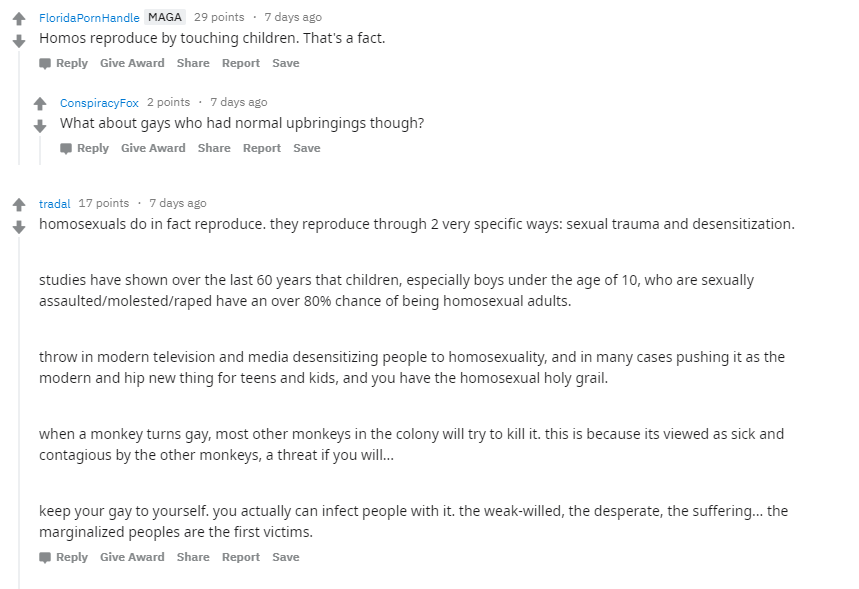 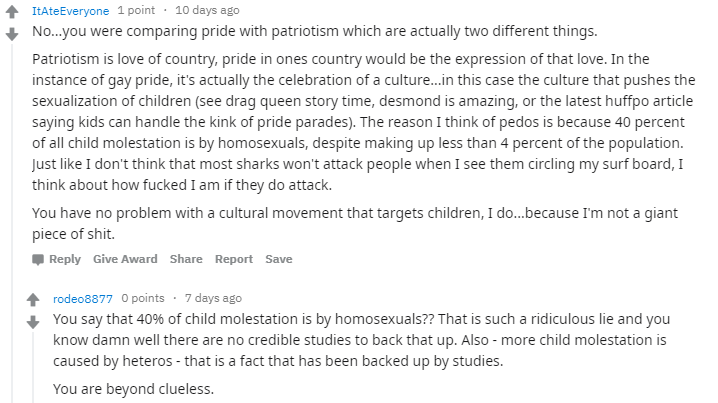 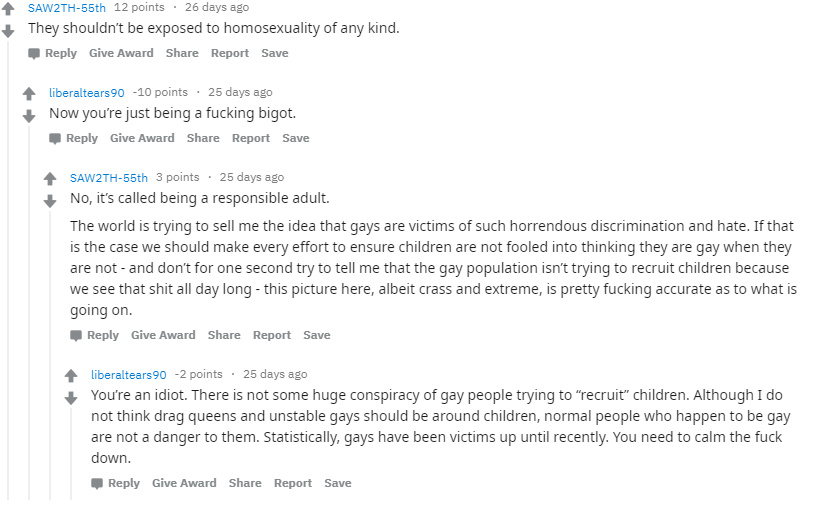