Users on “The_Donald,” a prominent subreddit for supporters of President Donald Trump, have repeatedly issued calls for violence in response to Oregon’s governor calling for law enforcement to bring back Republican state senators who fled the state so the state senate wouldn't have the quorum to pass climate change action. Despite Reddit’s policy barring content that “encourages, glorifies, incites, or calls for violence or physical harm,” users have posted messages claiming that violence is “the only way we're going to get any peace in our lives” and that it’s “good” to “threaten violence,” have urged others to “stock upon that ammo,” and have written that they would “help” with "shooting a cop trying to strip rights from Citizens.”

Update (6/26/19): Reddit has now quarantined “The_Donald” due to “threats of violence against police and public officials,” meaning the subreddit will now “generate no revenue,” “not appear in non-subscription-based feeds (eg Popular),” and won’t be “included in search or recommendations.”

Update (6/25/19): All comments cited in this piece except for one have been removed since publication and most have been replaced with the message: “Comment removed by moderator.”

Do not post content that encourages, glorifies, incites, or calls for violence or physical harm against an individual or a group of people; likewise, do not post content that glorifies or encourages the abuse of animals. We understand there are sometimes reasons to post violent content (e.g., educational, newsworthy, artistic, satire, documentary, etc.) so if you’re going to post something violent in nature that does not violate these terms, ensure you provide context to the viewer so the reason for posting is clear.

If your content is borderline, please use a NSFW tag. Even mild violence can be difficult for someone to explain to others if they open it unexpectedly. [Reddit, accessed 6/24/19]

Reddit has previously banned multiple subreddits in violation of this policy. Reddit “shut down several Nazi and white supremacist subreddits” in 2017 after its policy came into effect, according to The Verge. In 2018, the site banned the largest subreddit dedicated to the Qanon conspiracy theory, citing “repeated violations of the terms” of its content policy, NBC News reported, noting that the forum was “host to a stream of violent threats.” And on June 20, the platform banned the subreddit “r/frenworld,” which “featured racist and anti-Semitic Pepe the Frog-style cartoons,” with a spokesperson saying it “violated rules against encouraging and glorifying violence,” according to The Daily Beast reporter Will Sommer. [The Verge, 10/25/17; NBC News, 9/12/18; Twitter, 6/20/19]

Militia groups have threatened violence against efforts to bring back Oregon GOP state senators who refuse to pass legislation on climate action. According to The Daily Beast, multiple armed militia groups “are mobilizing to prevent Oregon state police from arresting Republican state senators who went into hiding on Thursday in order to prevent climate change legislation from passing.” After Democratic Gov. Kate Brown planned to dispatch “state troopers to bring them back,” one of the state senators warned “that he would resort to violence rather than return to the state.” The outlet quoted a “source inside the Oregon militia movement” saying that its members are “willing to put their own lives in front of these senators’ lives.” From the June 21 report:

All 11 of Oregon’s Republican state senators are currently on the lam, with some leaving for Idaho in an effort to deny the Democrat-controlled state senate a quorum to pass a cap-and-trade bill. In response, Oregon Governor Kate Brown (D), citing a provision in the state constitution that allows the state to “compel” absent lawmakers to attend legislative sessions, dispatched state troopers to bring them back.

One of the lawmakers on the lam, Republican Brian Boquist (R), warned that he would resort to violence rather than return to the state, implying in a local television interview that he would attack law enforcement officers sent to retrieve him.

“Send bachelors and come heavily armed,” Boquist said. “I’m not going to be a political prisoner in the state of Oregon. It’s just that simple.”

Users on the subreddit “The_Donald” have posted calls to violence and support for the armed militias. In response to reports about militias’ pledges to defend GOP legislators from being compelled by law enforcement to attend legislative sessions, multiple users on the subreddit “The_Donald” issued calls for violence to help the lawmakers, along with issuing support for the militias. 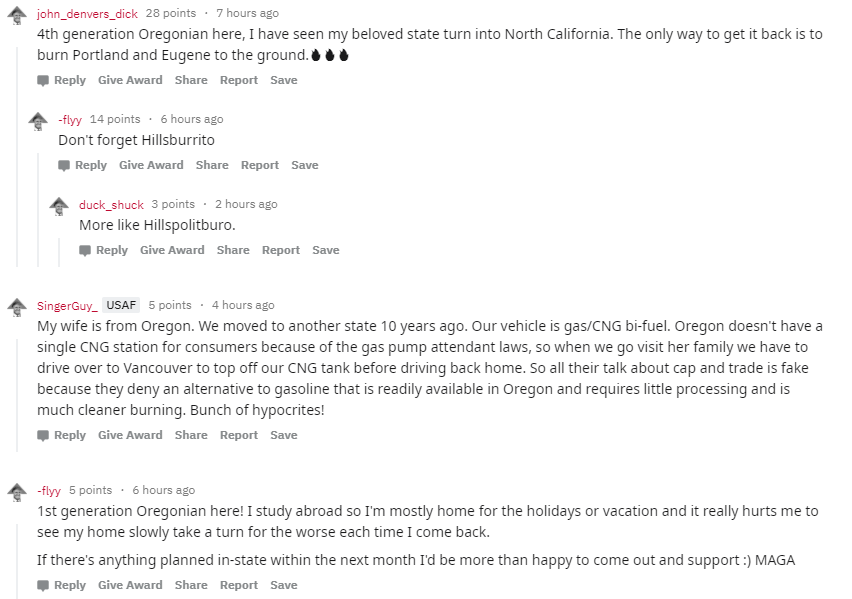 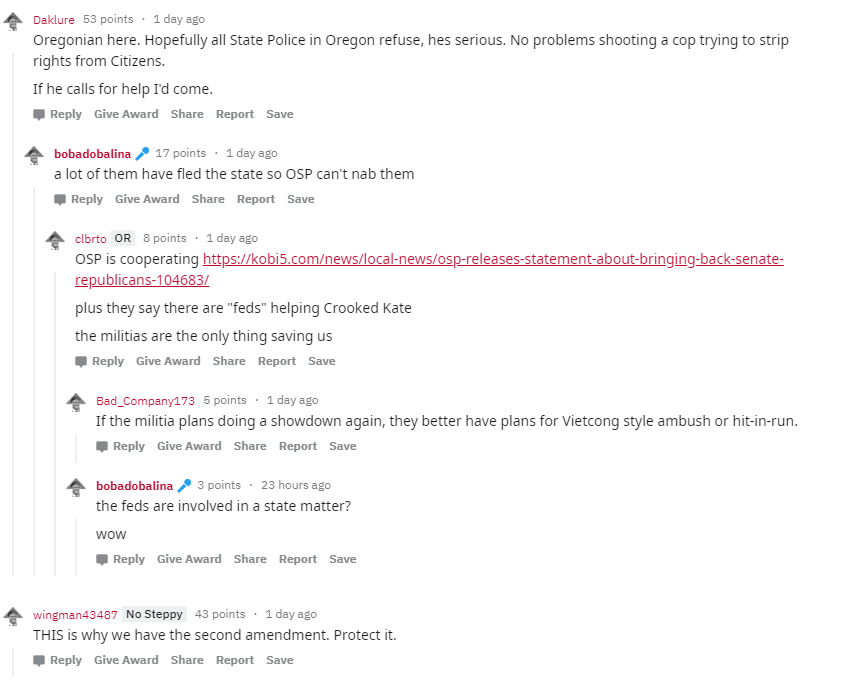 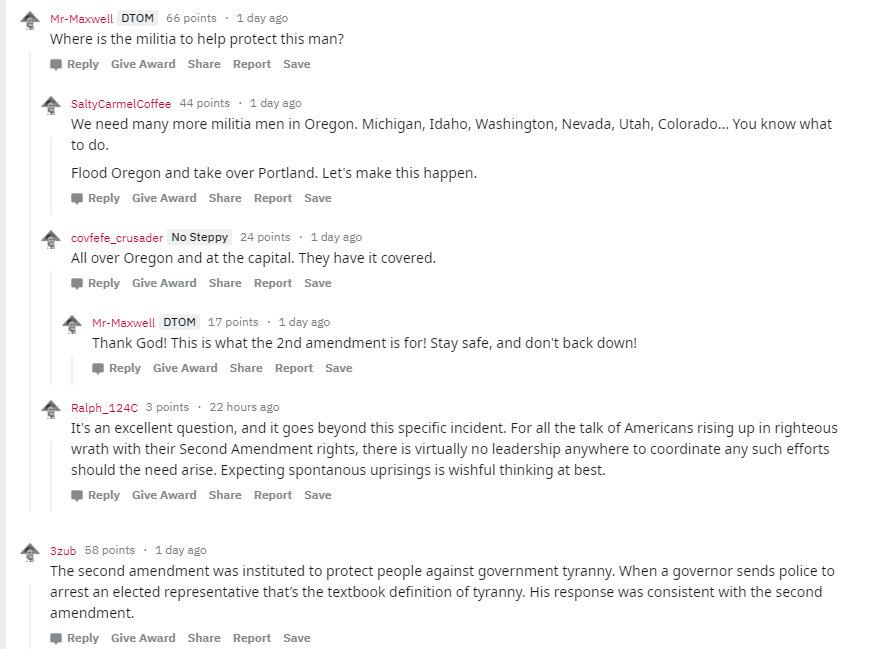 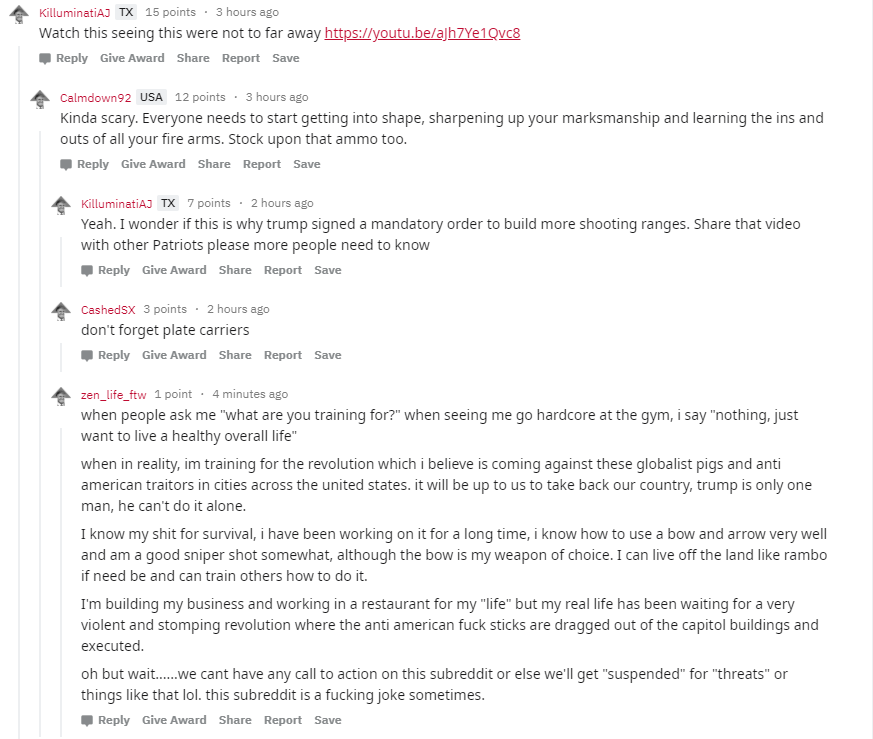 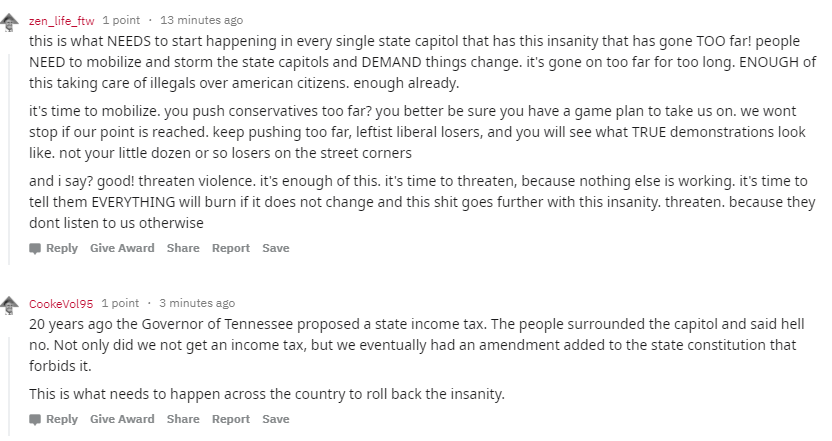 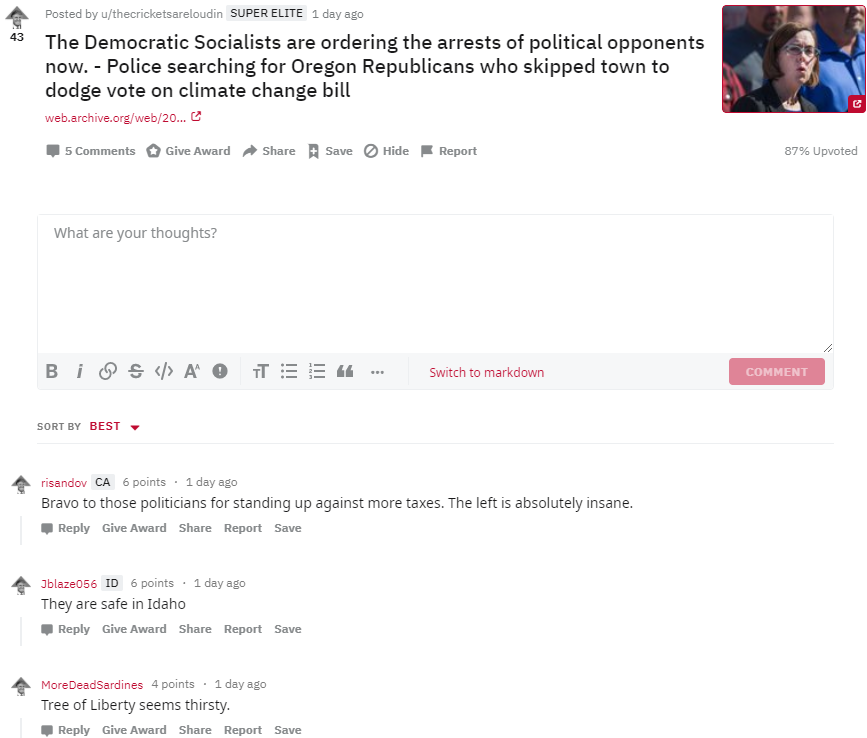 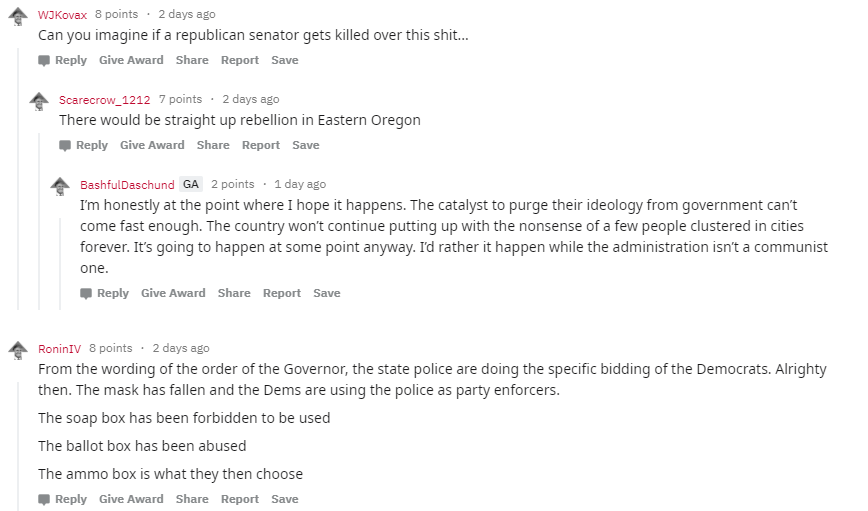