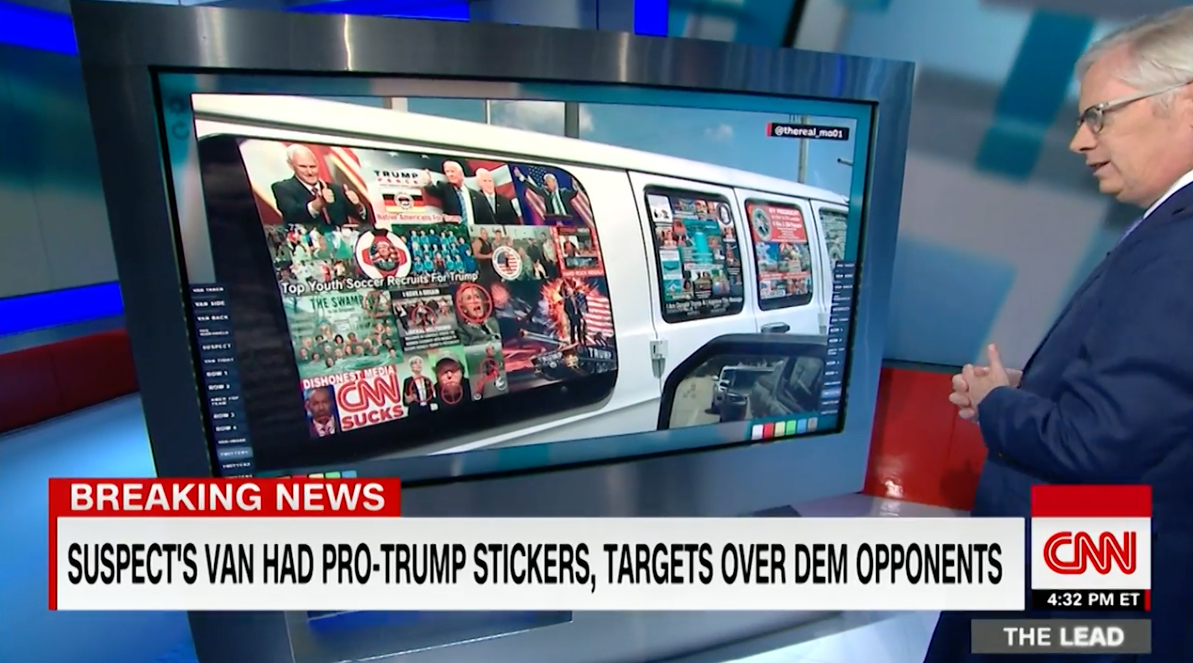 On October 26, Cesar Sayoc was arrested and charged with mailing improvised explosive devices to prominent Democratic figures. Pro-Trump media had previously pushed conspiracy theories about the mailed bombs, and following Sayoc’s arrest, these media figures and the far-right online networks of misinformation pushed a conspiracy theory that the stickers on a van that he reportedly owns show that the whole incident is a false flag.

The van Sayoc reportedly owns was covered in stickers with right-wing themes and pro-Trump and anti-CNN imagery.

OMG. My husband just called and said “Remember that picture I texted you of that crazy Trump van that delivered lunch to my office? THAT WAS THE GUY!” This is the picture he sent me of the van parked at his office on November 1, 2017. #FloridaMan @FBI pic.twitter.com/18BimNzNhi

Pro-Trump media theorized that the van was fake because the stickers were not worn down.

Rush Limbaugh: “None of the stuff on that van, the stickers and the decals, very little of it looks faded, meaning it doesn't look like it's been there very long.”

RUSH LIMBAUGH (HOST): None of the stuff on that van, the stickers and the decals, very little of it looks faded, meaning it doesn't look like it's been there very long. It's certainly -- this guy's van is parked outside, he's been driving around in this thing.

We have inclement weather here in south Florida. There's been some rain, but it's a hot, baking, wet sun -- and even if these stickers are plastered on the insides of the windows, there would be some fading of this stuff.

Now, if you look at the guy's Twitter feed, oh yeah, Cesar Sayoc has a Twitter feed, and the best I've been able to tell, it can trace back to 2016.

This guy sounds like a well educated, straight down the middle conservative. As best I can tell, his twittering, or tweetering dates back to 2016, which is quite timely.

Now, I don't know that any of my thoughts here mean anything, obviously. I'm just sharing with you some of the thoughts that I've had, that I -- and I've processed them.

You know, I just didn't blurt these out when I first started noticing this stuff.

Infowars’ Alex Jones: The van is “all perfect and brand new with all these perfect stickers on it.”

Facebook page Liberty Hangout posted a meme saying that the van looks “brand new” and that “these stickers also look like they were printed yesterday.” The meme had a hashtag: #FakeBombsFakeNewsFakeMemes 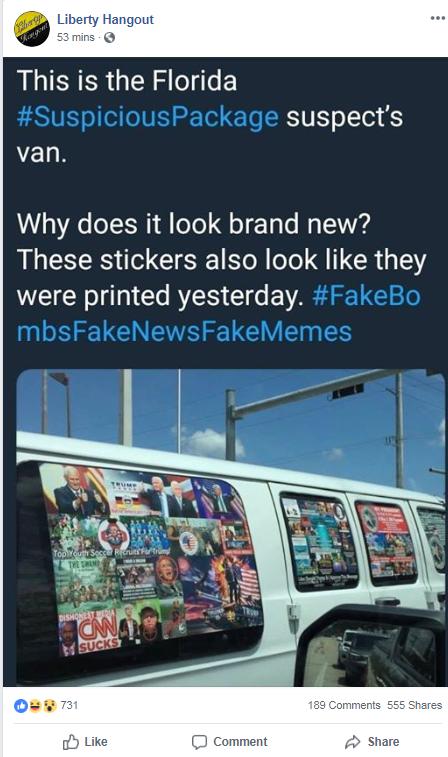 On Twitter, Infowars’ Paul Joseph Watson dismissed the pro-Trump stickers on the van because “on Twitter, he only follows 32 people - many of whom are left-wingers like Lina Dunham, Barack Obama and Jimmy Kimmel. What gives?” 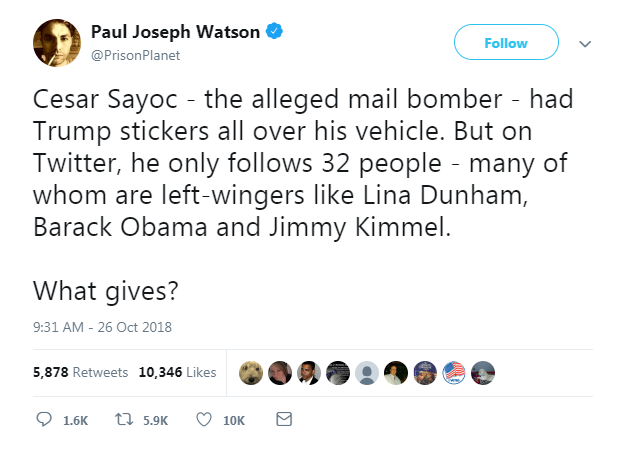 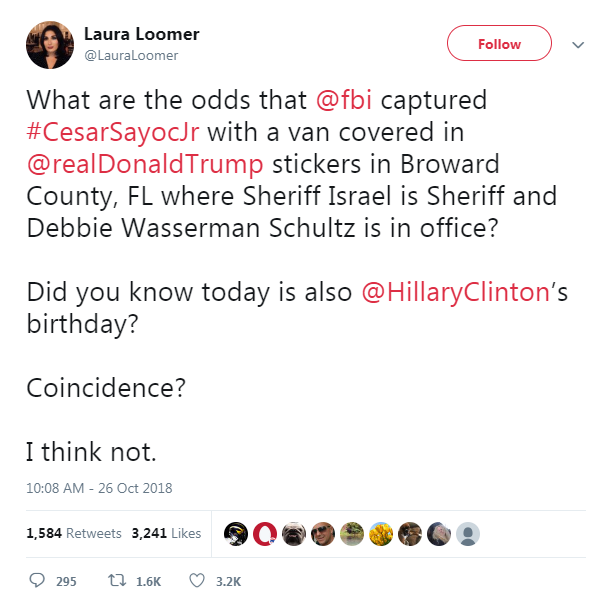 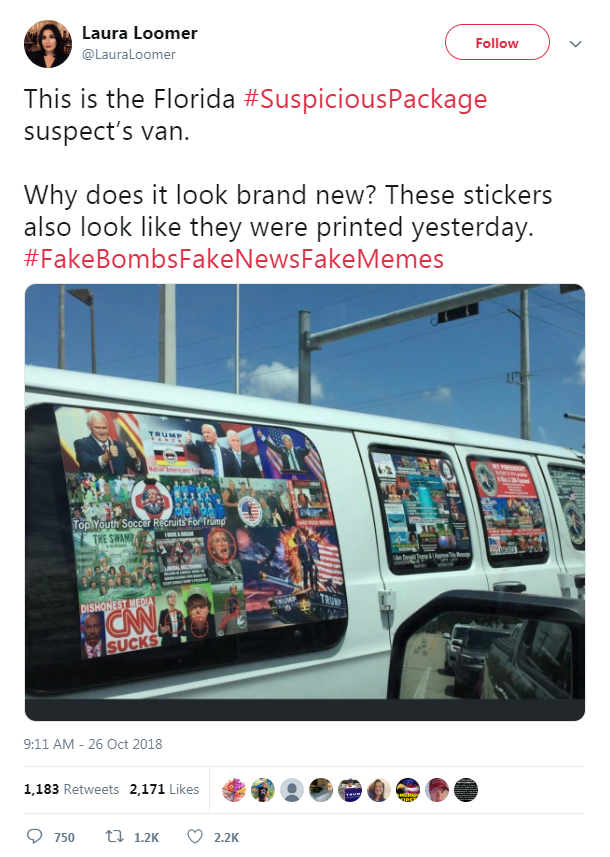 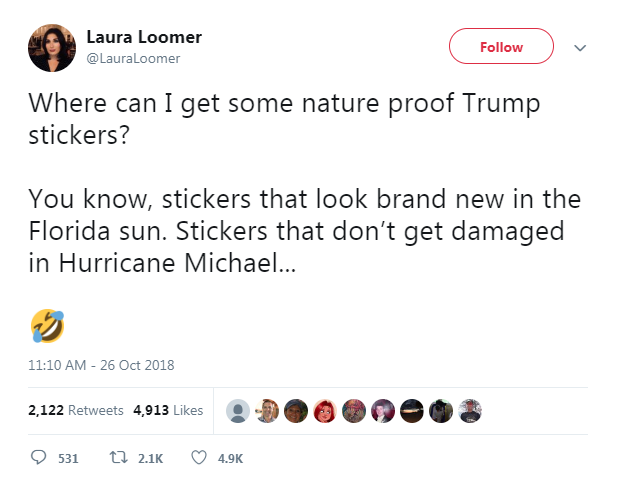 Michael D. Moore, aka “Thomas Paine” and True Pundit, pushed conspiracy theories about the stickers on the van. 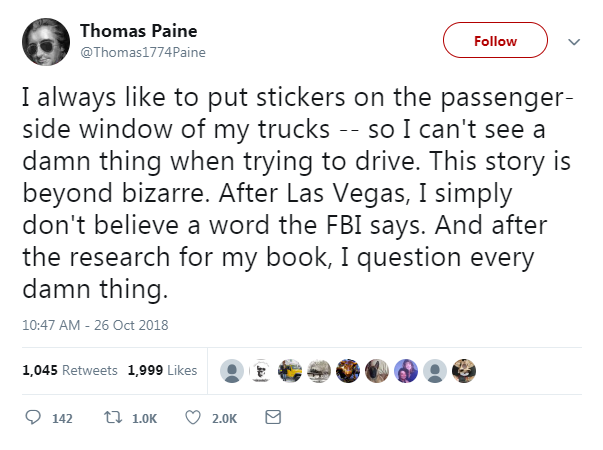 Many other right-wing and pro-Trump figures also pushed conspiracy theories about the van and its stickers: 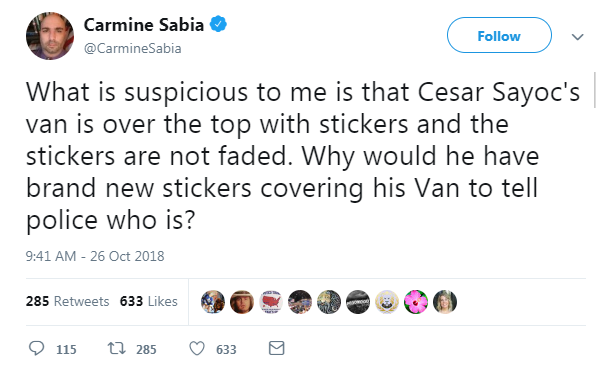 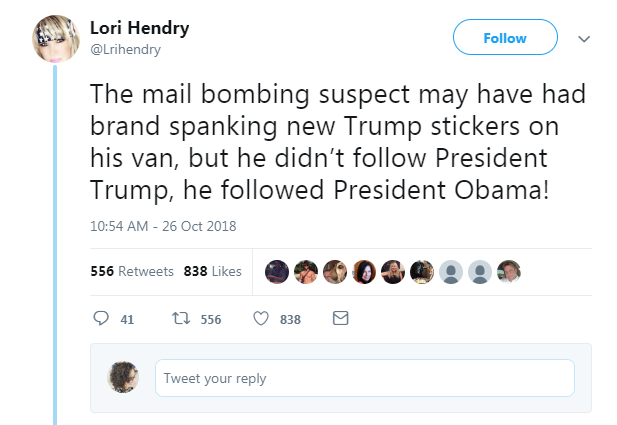 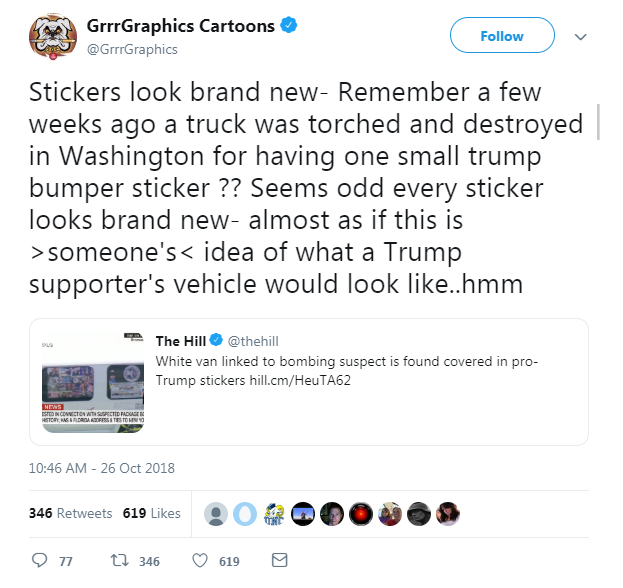 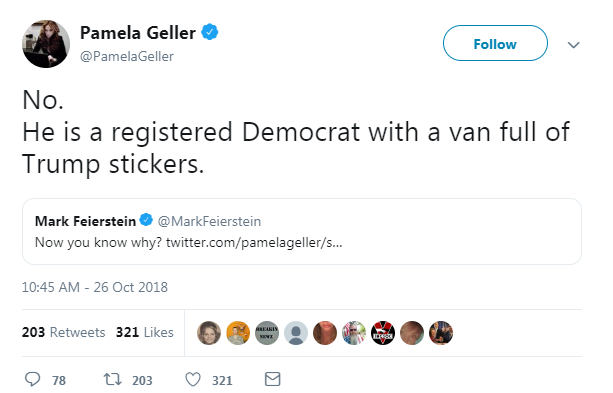 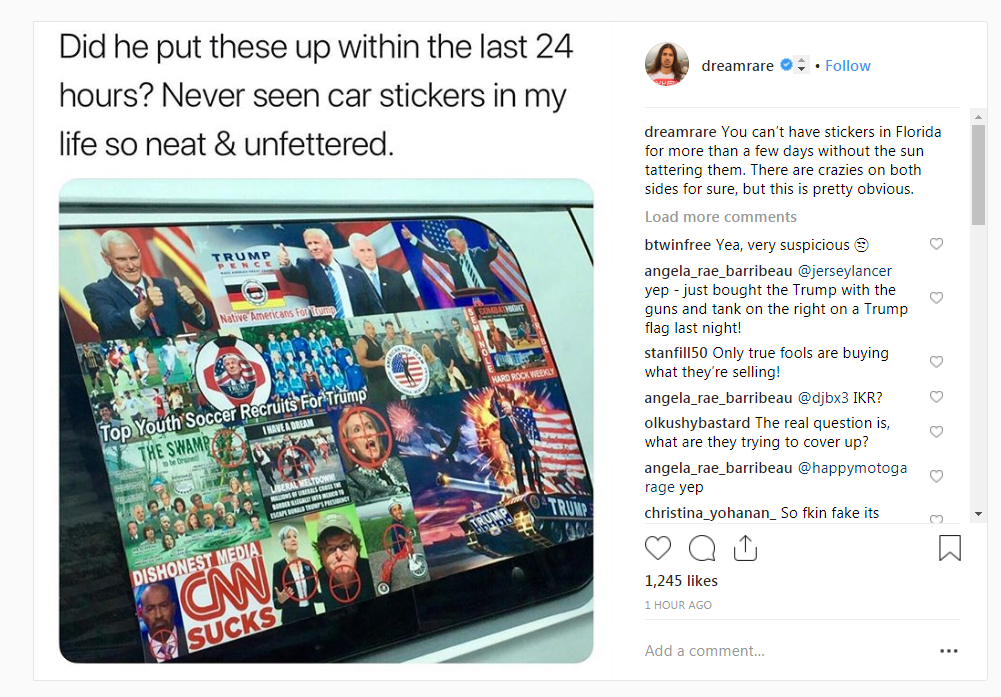 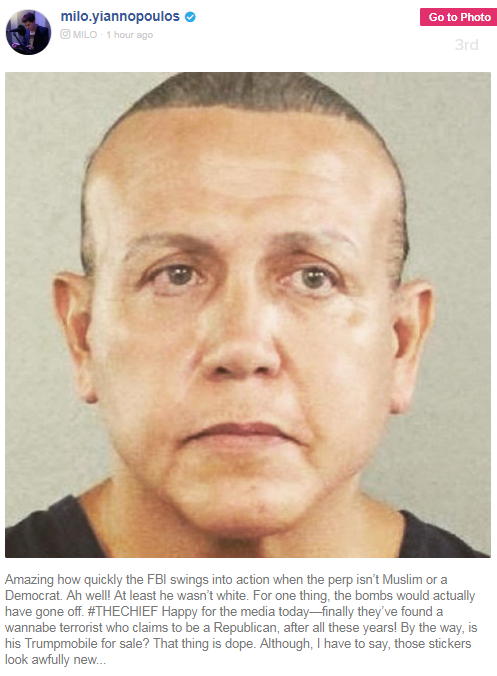 On one of the most influential pro-Trump online forums, the “The_Donald” subreddit, users also echoed skepticism about the van stickers in different posts, with some claiming they “look like single print collages” as opposed to “individual stickers,” or that they looked different depending on where you were looking. 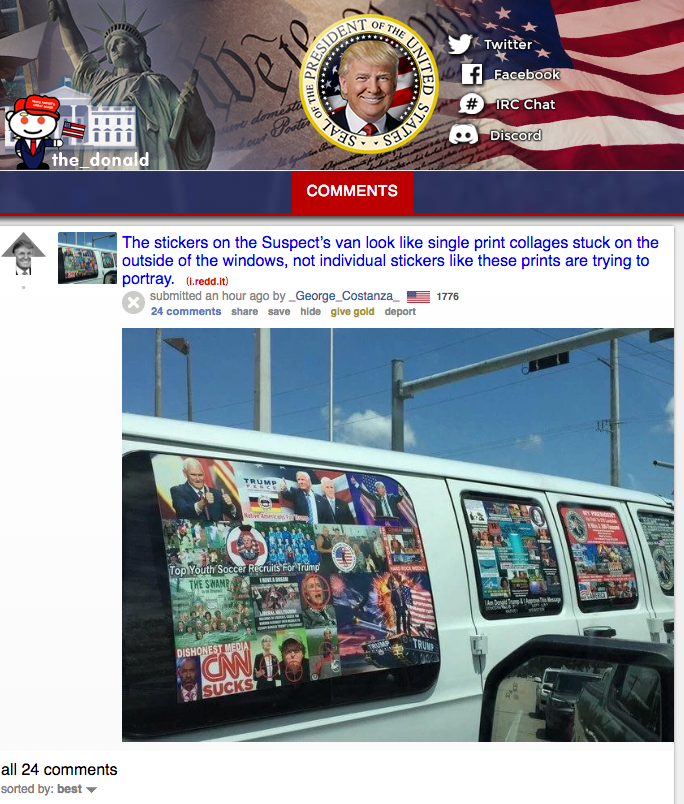 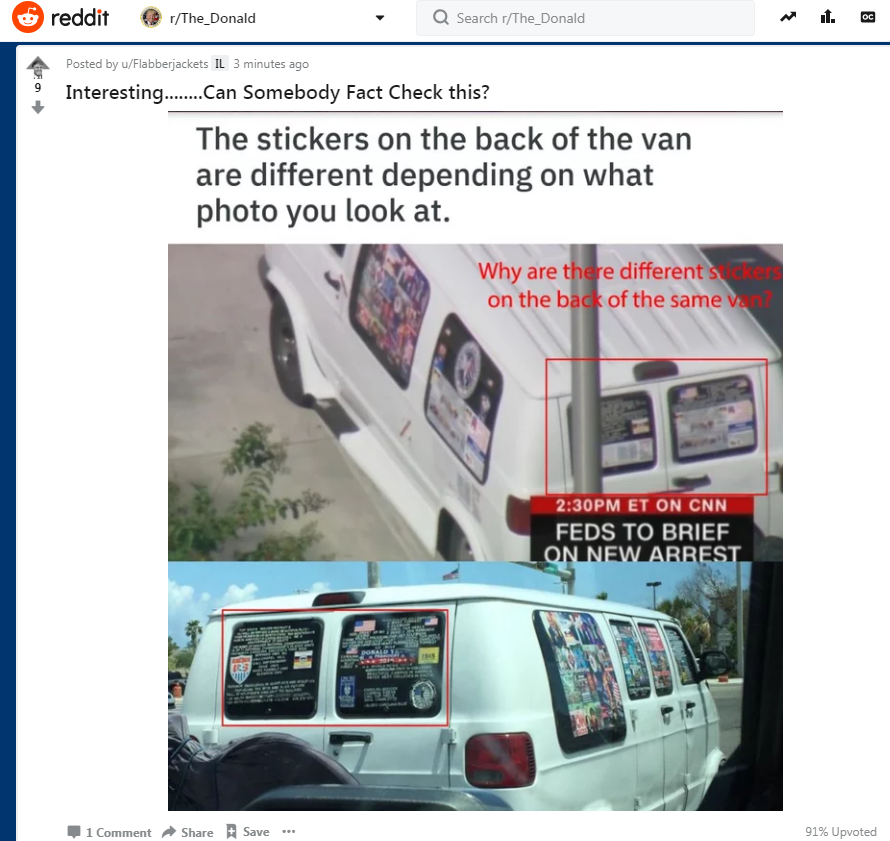 Posts in a number of wide-reaching pro-Trump Facebook groups said that the van looks fake: 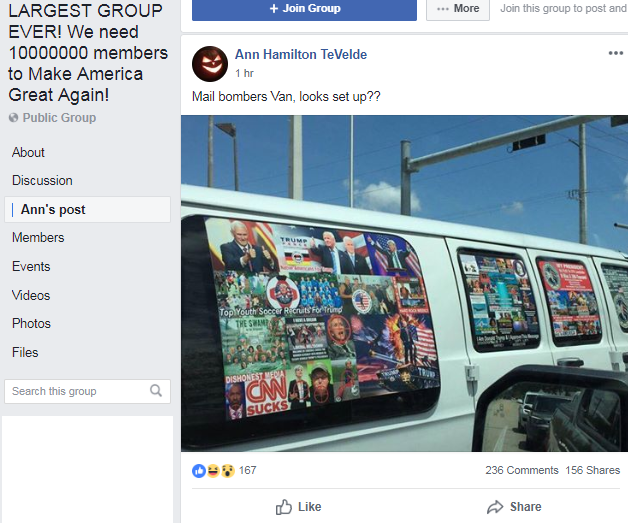 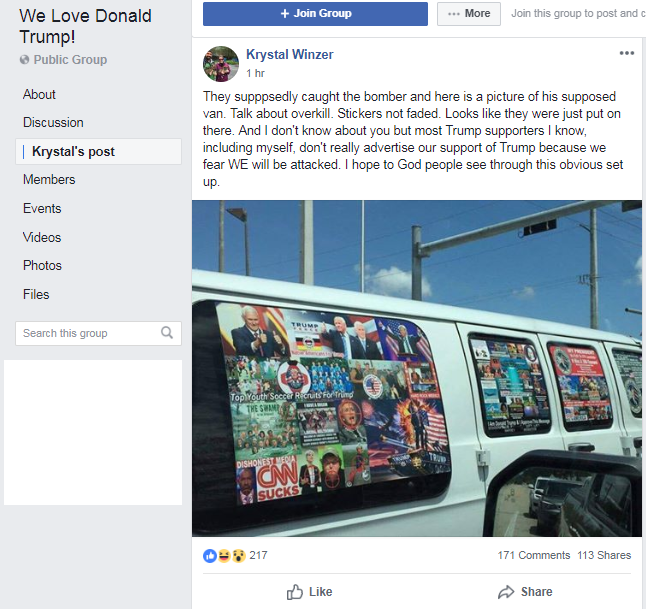 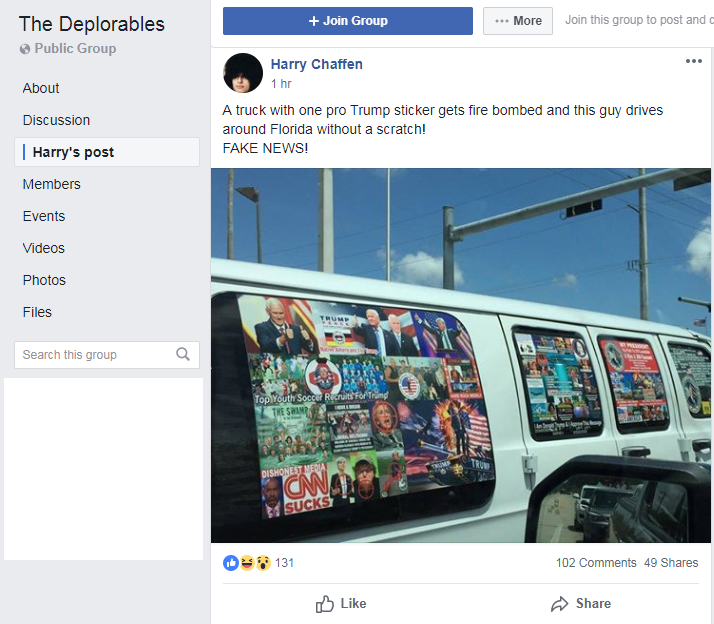