President Donald Trump tweeted that a train derailment stood as proof that Congress ought to pass his infrastructure plan just moments after a guest on Fox News made the exact same (and incorrect) point. Trump later claimed to be “monitoring here at the White House,” but it kind of seems like he was just watching TV along with the rest of us.

On December 18, a southbound Amtrak train derailed while crossing an overpass outside Dupont, WA. The incident resulted in several fatalities and sent dozens of riders to the hospital . While Fox News was covering the rescue and recovery efforts live on Outnumbered: Overtime, guest Oliver McGee (a civil engineering expert and anti-Obama political activist) suggested that the derailment was proof that America needed to upgrade its passenger rail infrastructure, adding, “This is what President Trump is calling for in that infrastructure bill” (emphasis added):

OLIVER MCGEE: We need positive train control because that ensures train separation and collision avoidance, ensures line speed enforcement, and that the temporary speed restrictions that are necessary for making wide turns and sharp turns. And more importantly our train system has to slow down at some points -- to as small as 30 miles per hour, and that’s required in order to negotiate the infrastructure itself. And this is what President Trump is calling for in that infrastructure bill. To just rehabilitate our crumbling infrastructure.

McGee’s comment, which he made at roughly 1:39 p.m. EST, was followed almost immediately by a tweet from Trump proclaiming that the derailment “shows more than ever why our soon to be submitted infrastructure plan must be approved quickly.”

The train accident that just occurred in DuPont, WA shows more than ever why our soon to be submitted infrastructure plan must be approved quickly. Seven trillion dollars spent in the Middle East while our roads, bridges, tunnels, railways (and more) crumble! Not for long!

Another 10 minutes passed before Trump expressed condolences for those killed and injured in the incident, again just moments after Fox returned to mentioning casualties from the incident in its on-screen chyron: 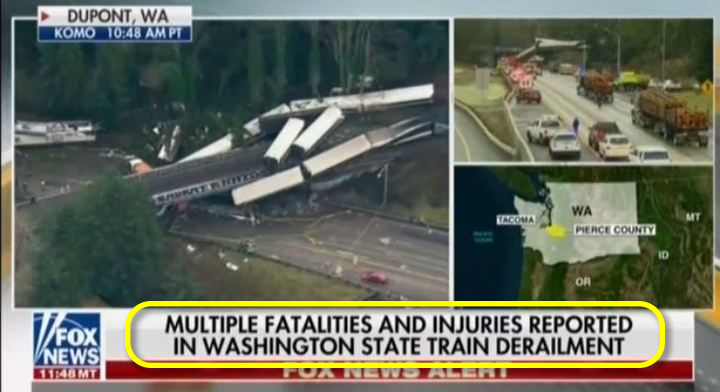 My thoughts and prayers are with everyone involved in the train accident in DuPont, Washington. Thank you to all of our wonderful First Responders who are on the scene. We are currently monitoring here at the White House.

This is not the first time Trump has seemingly tweeted his thoughts and opinions in direct response to Fox programming. And, as is often the case, Trump’s tweets and retweets based on his consumption of Fox News are often misleading or inaccurate. In this instance, Trump’s budget request submitted earlier this year actually proposed drastically reduced investments in Amtrak and overall transportation infrastructure. Furthermore, according to transportation expert Russell Quimby who responded to Trump’s tweet on MSNBC Live, given that most of the railroad system in the United States is “private infrastructure” and “privately owned,” Trump’s proposed policy solution would probably not have affected this incident in any way: