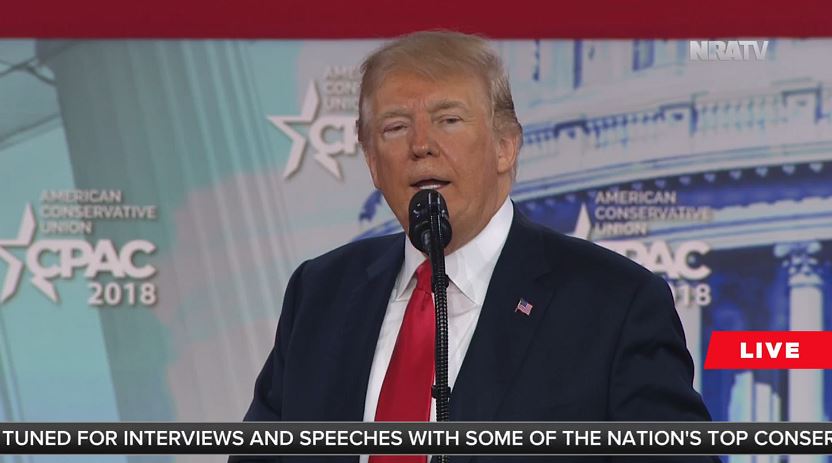 President Donald Trump is pushing a fringe idea to arm school teachers that has been promoted by conservative media and the National Rifle Association (NRA) in the wake of the mass shooting at Marjory Stoneman Douglas High School in Parkland, FL.

Trump made the proposal during a February 22 meeting at the White House, suggesting that armed teachers could receive a pay bonus. He also defended the idea on Twitter, promising that it would end attacks at schools:

I never said “give teachers guns” like was stated on Fake News @CNN & @NBC. What I said was to look at the possibility of giving “concealed guns to gun adept teachers with military or special training experience - only the best. 20% of teachers, a lot, would now be able to

....immediately fire back if a savage sicko came to a school with bad intentions. Highly trained teachers would also serve as a deterrent to the cowards that do this. Far more assets at much less cost than guards. A “gun free” school is a magnet for bad people. ATTACKS WOULD END!

Trump continued to push armed teachers during his speech at CPAC:

Trump: “Out of your teaching population, you have 10 percent, 20 percent of very gun adept people.”

Trump’s outrageous proposal has its roots in the aftermath of the 2012 Sandy Hook Elementary School shooting. After that attack, conservative media figures increasingly began pushing the idea of arming teachers, and the proposal was also backed in a post-Sandy Hook report issued by the NRA. The push to arm teachers has come full circle, with conservative media now celebrating the president’s adoption of their idea.

There is no evidence that arming teachers will stop school shootings. Even the NRA used to acknowledge this fact. After the 1999 mass shooting at Columbine High School in Littleton, CO, NRA CEO Wayne LaPierre gave a speech at the gun group’s annual meeting where he said, “We believe in absolutely gun-free, zero-tolerance, totally safe schools. That means no guns in America's schools, period ... with the rare exception of law enforcement officers or trained security personnel.”

Even armed individuals with extensive firearms training have failed to stop school shootings. In the case of the Stoneman Douglas shooting, an armed deputy present at the school took a defensive position outside the building where the shooting was taking place and never went inside to confront the gunman, contrary to  department policies. At Columbine, an armed police officer present at the high school attempted to fire on one of the shooters, but was quickly pinned down by the greater firepower of the shooter's assault weapon. Jeanne Assam, a retired police officer who did actually stop a gun rampage at a Colorado church in 2007, has rejected the notion of arming teachers, telling CNN in 2012 that “a teacher wants to be a teacher. He or she doesn't want to be a police officer” before concluding that the proposal is “ridiculous.”

Proposals to arm teachers do not appreciate the reality of the highly chaotic scene an active shooter incident creates. According to the Violence Policy Center, research has shown that “trained law enforcement officials have only an average 20 percent hit ratio in armed confrontations, meaning that only 20 percent of shots fired hit the intended target.”

Some states already allow teachers to carry guns, although it’s unclear whether the educators widely adopt the practice. But when armed teachers make headlines, it is not for stopping school shooters. As HuffPost noted:

In September 2014 at Idaho State University, a teacher accidentally shot himself in the foot when his concealed handgun discharged. Students in the chemistry class watched.

Later that month at a Utah elementary school, a teacher carrying a concealed weapon accidentally shot herself in the leg as she used the restroom.

In 2016, a group of elementary school students in Pennsylvania found a loaded gun in the bathroom after a teacher accidentally left it behind.

In general, the presence of firearms makes people less safe. Research has demonstrated time and time again that keeping a gun in the home increases the risk of homicide, suicide, and unintentional shootings. The concealed carry of firearms -- which conservative media claim without evidence to be a solution to mass public shootings -- also makes people less safe. Instead of preventing crime, laws allowing permissive gun carry increase violent crime and are particularly associated with aggravated assault.

In addition to carrying out their teaching responsibilities, teachers, if armed, would be tasked with preventing students from accessing their firearm. As Lily Eskelsen García, president of National Education Association, explained in a statement opposing Trump’s proposal, “Educators need to be focused on teaching our students. We need solutions that will keep guns out of the hands of those who want to use them to massacre innocent children and educators.” And as Randi Weingarten, the president of the American Federation of Teachers, noted, “We don’t want to be, and would never have the expertise needed to be, sharp shooters; no amount of training can prepare an armed teacher to go up against an AR-15.”