President Donald Trump retweeted right-wing troll Jack Posobiec’s tweet to his more than 35 million followers in his ongoing effort to push alternative narratives to distract from his tepid condemnation of the white nationalist rally in Charlottesville, VA, that included a fatal act of terrorism. Trump’s retweet shows that he has no qualms in elevating trolls whose arsenals include harassing journalists, peddling conspiracy theories and smears, and pulling absurd, attention-grabbing stunts for self-promotion. And Posobiec’s giddy reaction to Trump’s retweet demonstrates he feels validated by the presidential attention.

In his August 14 tweet, Posobiec appeared to be accusing the media of focusing excessively on Charlottesville at the expense of covering violence in Chicago, IL, against victims he identified as African-Americans (a point he attempted to make by tweeting out local news coverage of crime in Chicago).

Posobiec, formerly associated with the Canadian far-right outlet The Rebel, is a long-time Trump supporter who rode the coattails of the “alt-right” movement and openly identified with it in many now-deleted tweets as the movement ascended to prominence through its support of Trump during the 2016 presidential campaign. Along with Mike Cernovich and other online personalities, Posobiec then attempted to rebrand himself as “new-right” when the “alt-right’s” brand became too closely-linked to outspoken white nationalist Richard Spencer (Spencer once posted an image where he appears with Posobiec in Cleveland, OH, for the Republican National Convention). 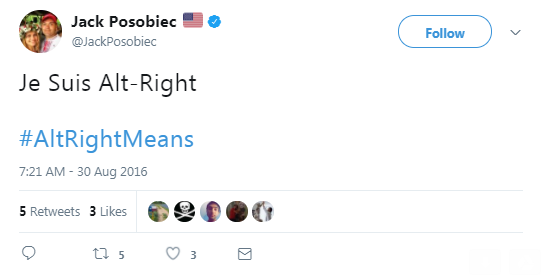 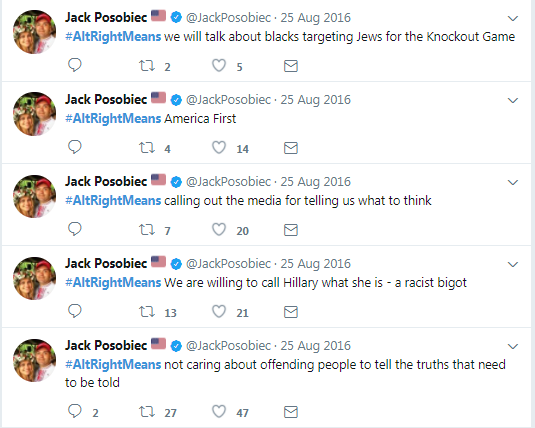 Before earning presidential attention on social media, Posobiec took a page out of the right-wing troll playbook of using social media to his advantage. He promoted attention-grabbing stunts masquerading as activism, rode the controversies to increase his visibility and online followers, and eventually used the platform for political access and promotion of personal business endeavors (in Posobiec’s case, a self-congratulatory book about the movement that took Trump to victory).

Like Cernovich, Posobiec justifies his stunts as activism or citizen journalism, even though his brand of journalism has included heavily pushing the “Pizzagate” narrative, a right-wing smear that falsely accused members of Hillary Clinton’s 2016 presidential campaign of being part of a pedophilia ring that operated out of a family-friendly Washington, DC, pizza parlor. Posobiec personally investigated the pizza parlor, and falsely declared that a gunman who commandeered the restaurant because of the ugly smear was a “false flag.” Posobiec also attended a White House press briefing with temporary press credentials in May and used the opportunity to push the debunked conspiracy theory about the death of former Democratic National Committee staffer Seth Rich. On Twitter, he promoted a cache of hacked emails allegedly belonging to French President Emmanuel Macron during his campaign. Eventually, expert analysis of the documents Posobiec was pushing as #MacronLeaks showed that some were “not genuine” and tied the efforts to discredit Macron to users based in Russia. 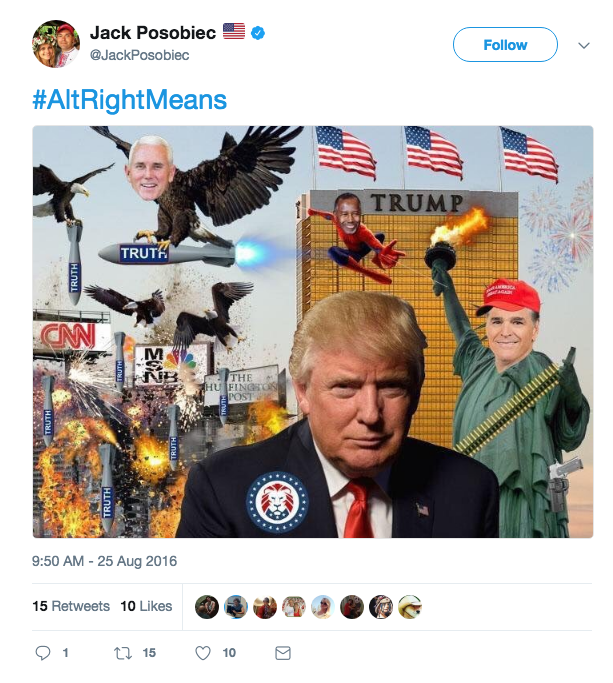 Posobiec was recently featured on an Anti-Defamation League’s (ADL) list of far-right figures who, together with the white supremacist “alt-right,” use the internet to spread vitriol and harass people. While Posobiec reacted to the list with a tantrum, comparing ADL’s members to Nazis and claiming he was being targeted as a Trump supporter, he gleefully participated in an online campaign against CNN that resulted in CNN journalist Andrew Kaczynski getting harassed and receiving death threats.

The troll’s giddy reactions to Trump elevating his profile, his subsequent attempts to pivot further away from the “alt-right” movement, and his threats to “start defamation cases” against media who label him an “alt-right” figure, weren’t the only consequences of the president’s retweet. It also showed that to push his war against the free press -- whom he has recently attacked for not praising his “additional remarks on Charlottesville” -- Trump is willing to enlist any unscrupulous figures no matter what harassment tactics and smear campaigns they habitually engage in.