Our media ecosystem is broken. Americans are continually pummeled online with computational propaganda campaigns, including fake news and manipulated trending topics on Facebook and Twitter. These campaigns drive political conversation from social media feeds to cable news to the White House, but there’s been little acknowledgment of this reality in mainstream political coverage.

Two academic studies, one recent and one from last year, give us a good sense of how social media manipulation plays out online. This week, Oxford Internet Institute’s Computational Propaganda Project released a study that illustrates the disconnect in American political discourse. The study analyzed “junk news” (the term researchers used for fake news and other kinds of misinformation) shared on Twitter and Facebook in the three months leading up to President Donald Trump’s first State of the Union address. It found that on Twitter, Trump supporters shared 95 percent of “junk news” websites that the researchers had identified for their sample, accounting for 55 percent of “junk news traffic in the sample.” Other audiences also shared links from these “junk news sites” but at much lower rate. On Facebook, far-right pages that the researchers collectively called “Hard Conservative Group,” shared 91 percent of the “junk news sites,” accounting for 58 percent of total “junk news” traffic from the sample.

The study’s conclusion of the overall American political conversation online is worth highlighting: “The two main political parties, Democrats, and Republicans prefer different sources of political news, with limited overlap. For instance, the Democratic Party shows high levels of engagement with mainstream media sources and the Republican Party with Conservative Media Groups.” This is similar to last year’s Harvard Berkman Klein Center study of traditional media and social media coverage leading up to the 2016 election. According to the author, whereas liberals and Democrats get their news from mainstream media that are ideologically structured from the center to the left, conservatives increasingly rely on only right and far-right sources in their news consumption.

Social media filter bubbles have received a lot of media coverage but they’re only part of the problem. American political conversation doesn’t just exist in filter bubbles. The influence is lopsided. Right-wing media and social media influence both mainstream media and, by extension, the liberals’ filter bubble (because liberals consume more mainstream news). But the reverse isn’t true.

Media coverage of #ReleaseTheMemo is a prime example of the problem of the manipulation related to this conservative filter bubble. Information warfare expert Molly McKew wrote a detailed analysis of the computational propaganda campaign that pushed the hashtag to go viral on social media, detailing how #ReleaseTheMemo was a “targeted, 11-day information operation” amplified by both Russian trolls and American Trump supporters to “change both public perceptions and the behavior of American lawmakers.” McKew noted that this campaign, which is part of a far-right echo chamber, is “not just about information, but about changing behavior,” and that it can be “surprisingly effective.” But Playbook, Politico’s premier political news product, mentioned the article almost in passing the day after its release, in some ways proving McKew’s point. Despite the fact that Playbook had covered #ReleaseTheMemo campaign often in the previous week, McKew’s article was mentioned far down Sunday’s edition of the newsletter, below a recap of Saturday Night Live’s political sketches. 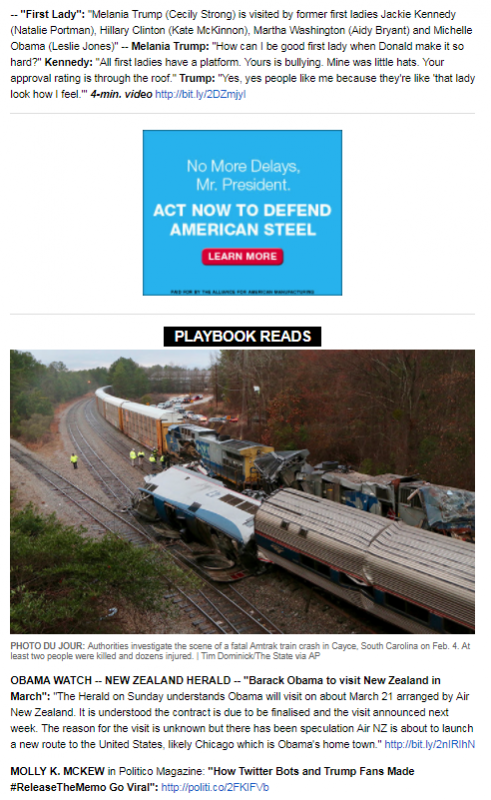 As the Oxford study shows, Trump and his army of supporters online are in the driver’s seat. What we see as trending on social media often isn’t organic but the result of sophisticated amplification campaigns, which are part of a far-right echo chamber. The goal of computational propaganda is to manipulate public opinion and behavior. Covering politics in this environment requires both a working knowledge of computational propaganda and a duty to explain to readers when political interest is driven by social media manipulation.