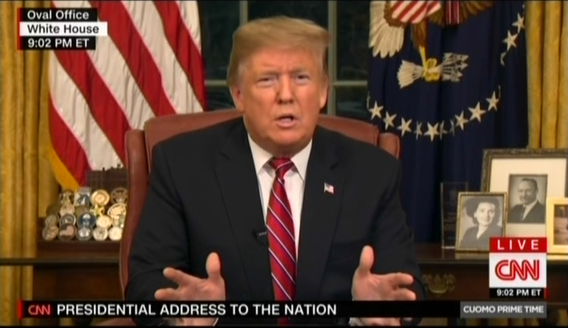 Critics warned the major broadcast and cable news networks that if they turned over their airwaves to President Donald Trump for a speech he wanted to give on the purported “Humanitarian and National Security crisis on our Southern Border,” they would inevitably be participating in a White House disinformation campaign. Every single one of them did it anyway, deciding as a herd that the traditional deference to any president who asks for time to address the nation outweighed concerns about this particular president’s unique and abnormal willingness to lie.

The critics were right.

Over the course of the overtly political nine-minute speech on Tuesday night, Trump sought to convince the public of a nonexistent emergency to justify the partial government shutdown he started to create leverage to build his long-sought border wall. In a humiliating turn for the networks, the president broke no news, instead using the opportunity to reiterate the same immigration talking points he’s been pushing for years. And by breaking into regular programming to air what was effectively his regular stump speech, they all implicitly validated his claim of a crisis.

The president made his case by deploying a series of falsehoods, misstatements, and outright lies. This was predictable -- Trump lies constantly, particularly on immigration, and repeats those lies so frequently that The Washington Post put together a prebuttal running down 20 possible false claims that might come up during the speech.

But the networks gave him the time anyway, with the full understanding that he would lie to their audiences.

Most of the heroin Trump is talking about comes through legal ports of entry, not through unwalled areas.

Fact-checking Trump's address: There is no new crisis at the border https://t.co/wQREvmHF5u

Democrats have not made a “request” for a steel barrier, as far as anyone knows. They don't want any of this.

And as for the $5.7 billion, Pence said yesterday that was what _the president_ had said he expected. Trump is now, amazingly, claiming that ask — which originated with the House of Representatives after Trump asked for $5B — came from law enforcement. https://t.co/mvFYDoY4Jw

Trump is implicitly referring to the Obamas again. They have some fencing at their house, but it is not surrounded by a giant wall. (It is obviously protected by the Secret Service as well.)

Even if the trade deal is approved and does indeed lead to additional revenue, which is far from guaranteed, Congress would still need to appropriate those funds for a barrier on the border

Fact-checking Trump's address: “266,000 aliens arrested in the past two years”: The number is right but misleading https://t.co/VMCxT4GNDM

Trump says the border wall would “quickly” pay for itself.

While some critics had hoped that the networks would scrutinize the speech in real time and debunk the president’s lies with on-screen captions, in the end, none of them did it.

Instead, the networks allowed the president the opportunity to speak to the public unimpeded, leaving their journalists to address his falsehoods either afterward or on other platforms.

But the fact-checking came too late for any viewers who turned off their televisions after the president stopped speaking. The networks gave the White House exactly what the president wanted: unhindered access to lie to their audience. He played them, and they let him do it.