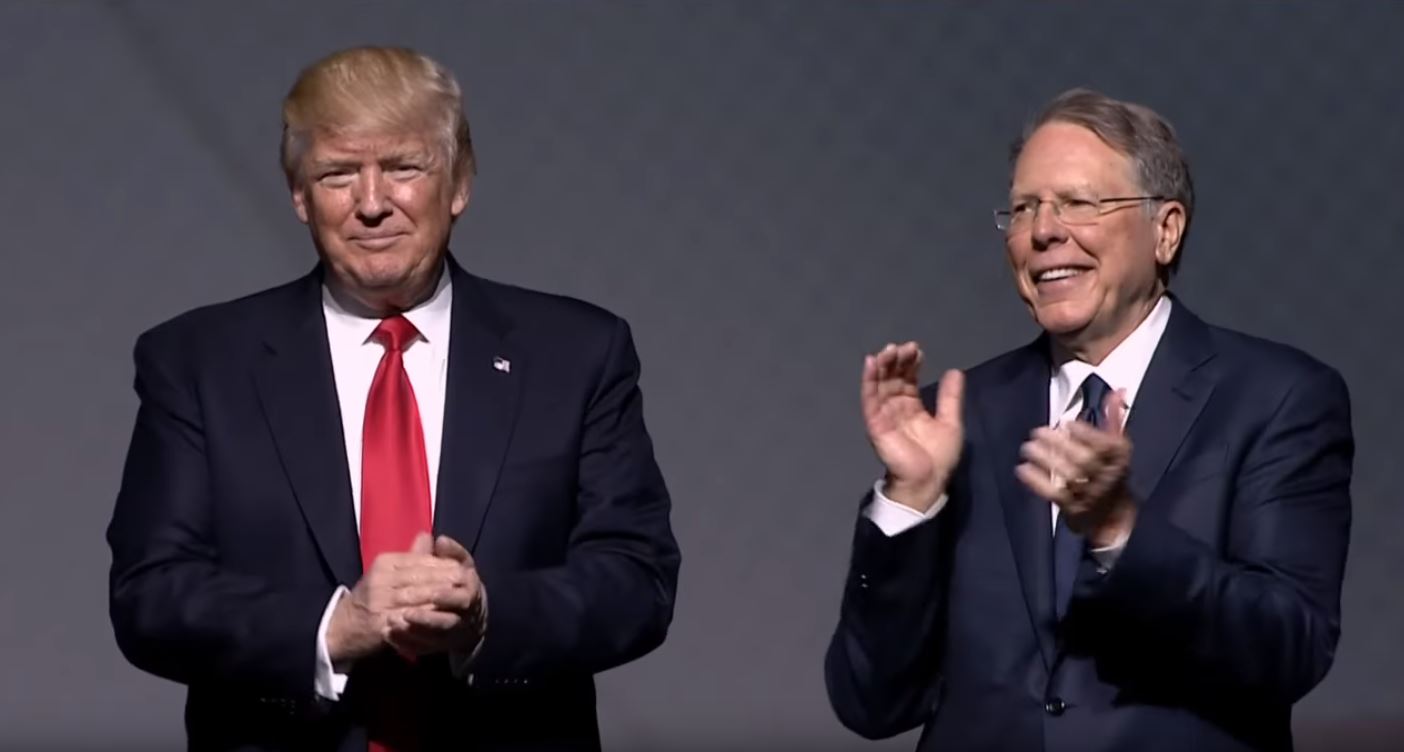 Standing before a raucous crowd of supporters in April 2015 during the National Rifle Association’s annual meeting, the group’s longtime leader Wayne LaPierre snarled into the microphone, “Eight years of one demographically symbolic president is enough!”

One and a half years later, LaPierre got his wish as an aging white man again captured the presidency.

In a promotional video published by the NRA on January 3, three weeks before President Donald Trump’s inauguration, LaPierre stood before a shadowy backdrop at the NRA studios, looked into the camera, and said, “We are Donald Trump's strongest, most unflinching ally. The powerful partner he needs to get things done on behalf of American freedom. Join our ranks. Donate to our cause. And together, we will truly make America great again.”

Though Trump had already won the election by that time, LaPierre still adopted a defiant and apocalyptic tone fitting of the NRA’s siege mentality; he castigated the press, called out conservative groups for abandoning Trump after he bragged on tape about sexually assaulting women, and warned viewers of enemies at every turn.

During the presidential campaign, the NRA had broken its own spending records in Trump's support and now it was time for the organization to try to cash in. In the video, LaPierre claimed that Trump was “the most openly pro-Second Amendment presidential candidate in history” -- glazing over the fact that Trump previously supported several gun safety measures that would normally be disqualifying violations of NRA orthodoxy.

Despite Trump’s past stances, the NRA and Trump were the perfect political match. The then-president-elect and the country’s foremost gun group shared an affinity for culture war rhetoric, driven by white racial grievances, retrograde views of women, and anti-immigrant, anti-free press, and pro-authoritarian sentiments. They also shared a penchant for spreading division through fearmongering and peddling conspiracy theories.

In its efforts to back the president’s every move during his first year, the NRA turned to its media outlet NRATV, the gun group’s primary messaging mechanism. The NRA has had its own media operation for 13 years. Launched in 2004, it was originally known as NRA News, and largely revolved around a weekday three-hour program inspired by talk radio called Cam & Company. In October 2016, the outlet was rebranded and expanded as NRATV, a 24-hour online stream of expanded live programming and pre-recorded segments.

The personalities brought on to fill the airtime were decidedly Trumpian.

The NRA hired Texas-based conservative radio host Grant Stinchfield to anchor the most prominent addition to the lineup, an eponymous news show providing hourly live updates in the morning and early afternoon. Stinchfield soon echoed Trump’s bellicosity, comparing a Jewish political opponent to a Nazi Gestapo member, suggesting that North Korea drop a nuclear bomb on California, and claiming that former President Barack Obama carried out an intentional plan to “inflict harm on America.” Another new hire was conservative commentator Bill Whittle, who had spent the previous year appearing on an “alt-right” web series to promote discredited theories about race and intelligence and to make racist claims, such as suggesting African-Americans are slaves of the Democratic Party, trading their supposed willingness to engage in voter fraud for welfare. NRATV also greatly expanded the role of NRA News’ Chuck Holton, who would go on to claim on NRATV that Black Lives Matter was poised to commit mass rape and murder against whites.

This new stable of personalities has cemented the media output of the self-proclaimed “oldest civil rights organization” as leading source of divisiveness in America.

The NRA’s war on the right to protest the government

Hand-in-hand with the hateful commentary on NRATV is a pattern of attacks on basic freedoms and rights in service of Trump’s authoritarian tendencies. One of these instances was an outrageous attack on those who use their First Amendment rights of speech and assembly to speak out against Trump.

Narrated by conservative radio host Dana Loesch, an NRATV commentator who was elevated to serve as the NRA’s national spokesperson in February, the one-minute spot depicted a dark version of America that is clearly at odds with reality. Using footage of isolated incidents of property damage and police confrontations, Loesch tarred the largely peaceful resistance movement as a violent force destroying America and delivered a line that was criticized as an incitement to violence against Trump critics: “The only way we stop this, the only way we save our country and our freedom, is to fight this violence of lies with the clenched fist of truth.” The message was clear: Stop complaining about Trump in the public square or face the wrath of the nation’s premier firearm group.

The Washington Post reported that the spot had angered gun owners with its extremism, although the video found a fan in conspiracy theorist and Sandy Hook truther Alex Jones, who praised the NRA’s “more hardcore” direction. In response to criticism, Loesch and Stinchfield said the group would never apologize.

The controversy seems to have only emboldened the NRA’s attacks on Trump critics, with follow-up videos employing similarly incendiary language to attack those who use their First Amendment right to protest the president, including one that claimed opponents of Trump will “perish in the political flames of their own fires.”

Tellingly, when deadly violence was actually unleashed on peaceful protesters -- after a man who admired Hitler drove his car into a crowd of protesters in Charlottesville, VA, injuring 19 people and killing activist Heather Heyer -- NRATV was conspicuously silent.

NRA takes its attacks on the press to authoritarian heights

For years, the NRA has regarded the media as a participant in a conspiracy by elites to attack gun ownership. While that has continued during the Trump administration, NRATV also began to advance the narrative that critical reporting on the president is oppositional to American values and -- bizarrely enough -- incompatible with the U.S. Constitution.

Authoritarian claims about the role of the press since the launch of NRATV include:

NRATV personalities have also been willing to serve as Baghdad Bobs for Trump by relaying patently false accounts of real world events. Among the lowlights:

What does the NRA have to show thus far as a result of these messaging techniques?

The obvious question is: What has the NRA’s divisiveness on steroids in 2017 achieved for the gun group’s agenda? The answer is thankfully little -- at least thus far.

With Republican control of the White House and Congress, it is expected that the NRA agenda would move forward to some extent; but there is no way it is moving fast enough presently for the NRA to be satisfied. The group’s number one legislative priority, a bill to force states to recognize concealed carry permits issued by all other states, has not been made law. It took until December for the NRA to convince Speaker Paul Ryan (R-WI) to hold a House vote on the bill -- it passed, but with less support than a version of the legislation voted on in 2011. The measure has also lost support in the Senate, where the bill would need 60 votes, with several former backers saying they wouldn’t vote for the bill again. Hearings for the NRA’s second biggest priority, a bill which would deregulate firearm silencers, were canceled following the shooting of Rep. Steve Scalise (R-LA) in June and the bill was then shelved by Ryan following the October Las Vegas massacre.

Despite the lack of accomplishments in this first year, it’s important to always remember how intertwined much of Congress is with the gun lobby, making the advancement of NRA legislation a constant threat while anti-gun safety members hold a majority.

The speed with which the NRA could advance its agenda also depends on the outcomes of future elections. Thus far, the NRA has been inept in its electoral activities in the era of Trump. In November, statewide elections in Virginia, the NRA-endorsed candidates for governor, lieutenant governor, and attorney general all lost. The NRA was also unsuccessful in its attempt to make reported child predator Roy Moore the junior U.S. Senator for Alabama.

While the NRA failed to secure several victories it surely thought it would achieve in its first year serving as a de facto media arm for the Trump White House, its luck could change in a moment’s notice. 2018’s nationwide elections are on the horizon -- and the NRA’s divisive messaging operations require continued vigilance.