In search of a winning issue for the approaching midterm elections, the Republican Party has seized on a strategy of cynically stoking the public’s fears and called for the sealing of the U.S.-Mexico border to stem a shadowy threat. Donald Trump and the right’s propaganda outlets are playing a key role, feeding their audiences a constant slurry of conspiracy theories. And mainstream journalists, especially on the major broadcast and cable news networks, are bolstering the GOP’s plan by saturating the airwaves with alarmist coverage that sends the message that the nation is facing a crisis.

It is October 2014, and President Barack Obama’s administration is responding to the diagnosis of a handful of U.S. Ebola patients following an outbreak of the disease in West Africa.

Journalists would eventually realize that the irresponsible, hysterical coverage -- including nearly 1,000 broadcast and cable news segments in the four weeks before Election Day -- had failed to properly contextualize the story and thus misled the public, and the Obama administration’s handling of Ebola was ultimately vindicated. But the GOP’s political strategy -- aided by Trump, who used his Twitter feed to panic the public -- succeeded as panicked voters helped Republicans take control of the Senate and expand their majority in the House. The right’s propagandists declared victory and moved on to their next smear, while Trump, having proved he could apply his skill at demagoguery to the political arena, began laying the groundwork for his presidential run.

The current drumbeat around the migrant caravan reminds me of the 2014 ebola panic, in which media outlets, pushed by Trump and the GOP's cynical grandstanding, aired nonstop coverage. After midterms, GOP stopped talking about it and coverage cratered. https://t.co/m3Z8I8hFuq pic.twitter.com/3GHyOP9oxp

Four years later, the combination of factors that allowed the GOP to so effectively stoke fears about Ebola to win elections seems to have returned. As the 2018 midterms approach, Republicans want voters to fear a caravan of migrants headed toward the U.S.-Mexico border. Trump is again leading the effort -- this time from the White House -- using the presidential bully pulpit to promote a never-ending stream of brazen, absurd lies from right-wing propaganda outlets. And mainstream journalists, having seemingly learned little from their Ebola coverage, are playing into Trump’s hands, producing wall-to-wall coverage of the caravan that presents the story as a fast-unfolding catastrophe.

Fox News, CNN, and MSNBC devoted nearly 15 hours of coverage to the caravan from October 15 to October 21. Fox News gave the story the most coverage out of the three, and the network was not subtle about it. Fox’s early coverage featured contributor Newt Gingrich urging Republicans to turn the caravan into an election issue. Trump quickly got the message and began falsely blaming Democrats for the caravan, and the resulting feedback loop has turned the story into Fox’s dominant narrative, with chyrons warning of an “immigration crisis” and commentators predicting violence, voter fraud, and the annihilation of civilization if the caravan is not stopped.

But as Trump fixated on the story, the other two cable networks have devoted an increasing portion of their airtime to it. Their sheer volume of coverage implicitly suggests a crisis is underway. 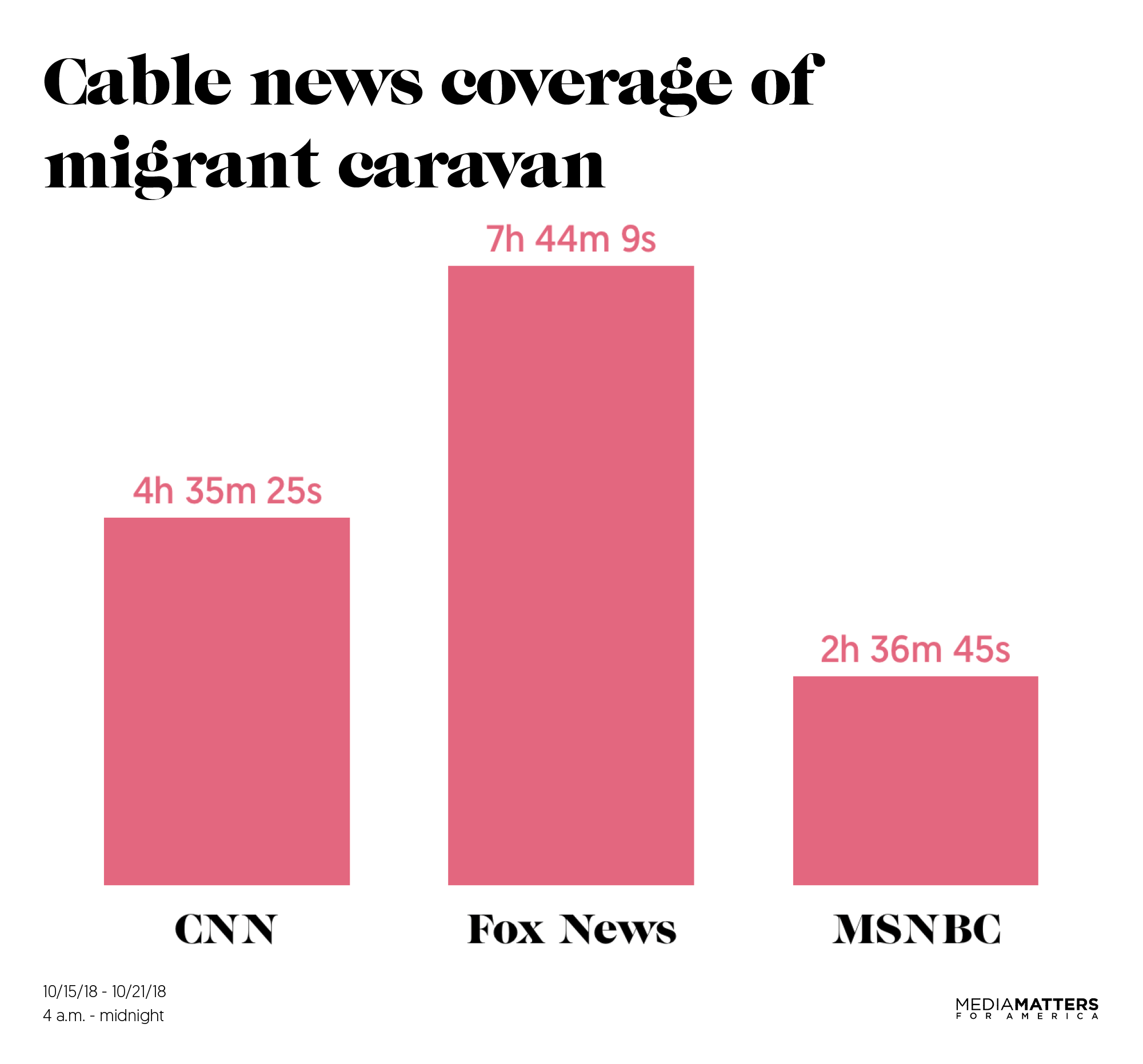 The broadcast networks are leading with the story on the evening news, while newspaper editors splash photos of the caravan across their front pages.  And Trump is bragging that his strategy is working, telling reporters that the unending b-roll of migrants headed north would help Republicans in the midterms.

As with the Ebola outbreak, the story of the caravan of migrants is a real one that deserves attention. But in the same manner that the infection of a handful in the U.S. triggered all-encompassing hysteria, the volume and tenor of Trump’s response and the resulting media coverage have drastically outpaced reality. The caravan is currently 1,000 miles away in southern Mexico. The Mexican government dispersed a similar caravan earlier this year and prevented most of the migrants from reaching the border; those who made it to the border were largely turned away. It seems likely that, with careful pressure and support from the U.S., the same thing will happen this time.

The similarities between the Ebola and caravan stories go beyond the overwrought media reaction each has received.

Both cases have serious public policy implications. But the Republican responses seem designed to stoke and capitalize on panic, and if implemented would actually make the problem worse. In 2014, Trump and the GOP called for travel bans from the West African nations where Ebola had killed thousands, even as experts argued that such restrictions would worsen the epidemic. Trump’s response to the caravan has been to threaten aid to Central American countries; if he followed through, the result would almost certainly be increased migration from those nations.

And in both cases, Trump and his right-wing allies are spinning out absurd conspiracy theories in an effort to panic the public. In 2014, they accused Obama of deliberately trying to infect the nation and lying to the American people for political and ideological reasons, and pushed hoaxes about Ebola-infected ISIS terrorists trying to enter the country from Mexico. This time around, Trump controls the federal government, so it’s the Democrats in Congress who are supposedly in favor of destroying the country. But what hasn’t changed is Trump and the conservative media fabricating a terrorist link -- with the president and his team explicitly acknowledging he has no evidence one exists.

In 2014, Republicans won the midterms and stopped talking about Ebola. With that, after spending weeks whipping the public into a panic, TV producers lost interest in the story and the coverage cratered. We’re about to find out if they learned anything from that failure. So far, the results feel like a rerun.