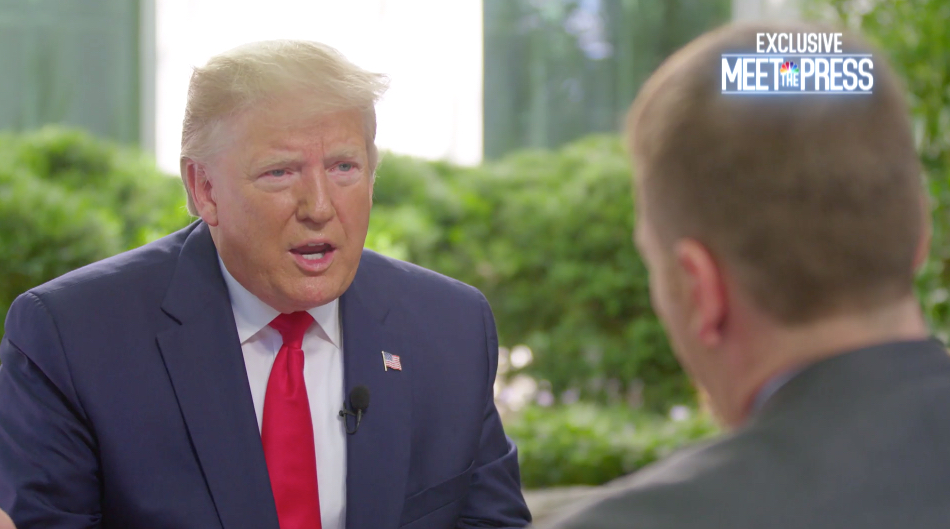 NBC’s Meet the Press aired President Donald Trump’s prerecorded interview with Chuck Todd on Sunday, and -- as it has become the norm for Trump -- the interview featured a number of demonstrably false claims, some of which Todd seemed unable or unwilling to push back on.

The most egregious lie, however, was one that Trump has told regularly: blaming former President Barack Obama for his own policy of separating immigrant families at the border while falsely taking credit for ending the practice; it's a lie that he and his cadre of media sycophants have repeated so often that multiple fact checks are available explaining that Trump’s “zero tolerance” policy first established the cruel practice.

Todd not only let Trump’s demonstrably false claim go unchallenged while taping the interview, but he also didn’t provide any pushback while offering live commentary on June 23, days after the interview was recorded. Moreover, Meet the Press irresponsibly amplified and spread Trump’s lie by repeating it without context or pushback on Twitter while the show aired, an act of journalistic malpractice in which news outlets instead become “propaganda distribution systems.”

This is a demonstrable lie and Meet the Press just tweeted it out without any context. https://t.co/v4az38Pnww https://t.co/VAKMQbaiDD

Meet the Press amplified this lie without pushback despite that the interview was recorded days ago; this was not a real-time tweet gone awry.

And it wasn’t the only lie the show helped Trump amplify this way. Meet the Press also tweeted out without any context Trump’s claim that impeachment would be “a very unfair thing because nothing I did was wrong,” failing to mention the number of reported impeachable acts Trump could be held accountable for.

During the interview itself, Todd failed to pushback effectively on a number of other lies, and he declined to add context for his audiences while commenting on the interview when it aired. As CNN’s Daniel Dale pointed out, Trump also lied about voter fraud in California, and about the real amount of U.S. military sales to Saudi Arabia, and he mischaracterized the way he invoked WikiLeaks while campaigning for the presidency in 2016:

Trump also said he was “joking” when he invoked WikiLeaks in the final weeks of the campaign: “And I say it in a joking manner at a speech. Joking. Everybody laughing. Everybody having a -- and they made it like it was serious.” No. Watch for yourself: https://t.co/7bRRIBjMt5 pic.twitter.com/rrEs8hUgsn

It's no wonder that many found Todd's interview lacking.

Just watched @chucktodd “interview” the president about kids and the border. I don't what that was. But it was not public discourse. Nothing to do with eliciting information, or accountability, or where do you stand? It was like feeding English sentences into a wood chipper.

Meet the Press could have used the time between taping the interview and airing it to add factual context to Trump’s many lies. Its refusal to do so raises questions about the show’s commitment to putting informative, fact-finding journalism before access to the administration.