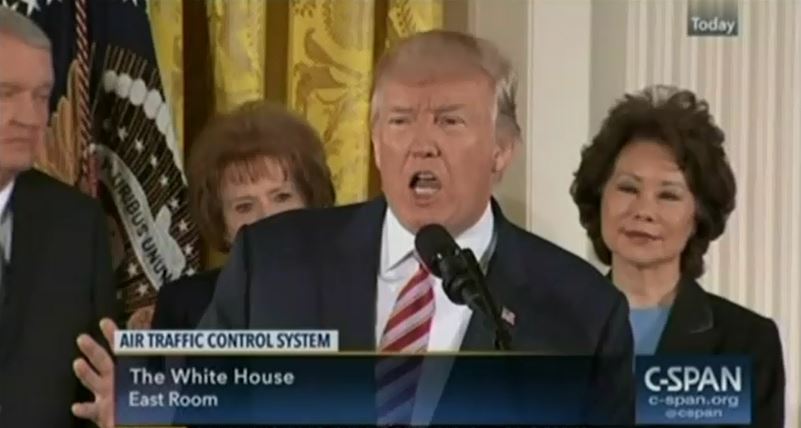 President Donald Trump is back on the campaign trail today promoting his infrastructure agenda, which the White House has falsely labeled as a $1 trillion plan to stimulate the economy and upgrade American infrastructure. Media outlets should avoid accepting the administration’s characterization of its scheme, which falls short of its already inadequate price tag and would saddle Americans with additional tolls and user fees.

On June 7, Trump is scheduled to appear at a rally in Cincinnati, OH, where he will promote his plan for American public infrastructure. The White House has billed its infrastructure agenda as a $1 trillion plan to upgrade and revitalize failing public works around the country. But, as The Associated Press (AP) and CNN reported, the plan outlined in Trump’s budget request for fiscal year 2018 just called for $200 billion in tax cuts spread over nine years meant to “leverage $1 trillion worth of construction.” The plan would establish a nationwide system of so-called “public-private partnerships” -- sometimes referred to as P3s -- that could impose new cost burdens on taxpayers. An article in The New York Times outlined how P3s “may result in near-term savings” but “there is little hard evidence that they perform better over time.” Eventually, taxpayers end up paying for infrastructure via taxes or tolls whether it is controlled by the government or leased to a private for-profit firm. A June 7 column in Politico went into even more details of the potential pitfalls of Trump’s pursuit of a public-private partnership model:

The government can reap huge benefits from public-private partnerships—but only if they are structured correctly. All too often, though, government officials lack the knowledge and experience necessary to negotiate good deals, ultimately costing taxpayers millions, if not billions, of dollars. In their attacks, Democrats may be misusing the word “privatization” when describing Trump’s infrastructure plan but the risks they describe are very real.

Other than the pitfalls of public-private partnerships inherent to Trump’s plan, it is also woefully inadequate to address the needs of public infrastructure in the 21st century. According to the American Society of Civil Engineers (ASCE), public infrastructure in the United States earned a D+ grade in 2017 and is in need of over $2 trillion of new investments over the next decade. Even in the best-case scenario, Trump’s plan would fall far short of these necessary investments -- and as some Democratic lawmakers have pointed out, Trump is actually cutting more from existing infrastructure programs than he plans to spend on tax cuts for new infrastructure. In contrast to Trump, the Congressional Progressive Caucus (CPC) does have a plan to make up for the roughly $2 trillion infrastructure funding gap, which it believes would create millions of new jobs and meet America’s infrastructure needs. The CPC proposal released last month stresses the need to “prioritize public investment over corporate giveaways” while addressing the need to “prioritize racial and gender equity and environmental justice” while stoking economic growth.

Far from being a $1 trillion plan to inject desperately needed federal investments into ailing public works, the Trump plan is little more than trickle-down economics loaded with tax giveaways for business and it is inadequate at best. Media coverage of his proposal needs to reflect those facts and would benefit from including expert perspectives and opposing views to better inform the infrastructure debate.