The Trump administration last week made a particularly cruel show of defunding the Special Olympics program in its annual proposed budget -- a largely symbolic gesture that was nonetheless indicative of the administration’s wholesale disregard for people with disabilities. After Secretary of Education Betsy Devos made a series of inept attempts to defend or address the proposed cut amid mounting public pressure, President Donald Trump finally walked back his administration’s line, saying he would change the proposal. In reporting Trump’s remarks, sloppy headlines, tweets, and cable news chyrons that simply quoted the president inherently gave him credit where absolutely none was due. It's part of a larger pattern in which context-free framing can undermine the substance of otherwise good reporting, reducing complex stories to overly simplistic headlines or lead sentences that ultimately mislead the public.

Secretary of Education Betsy DeVos appeared twice before Congress last week to discuss her department’s proposed budget for the 2020 fiscal year, and she faced tough questions about a proposed $17.6 million cut that would eliminate federal funding for the Special Olympics.

Presidential administrations typically release a proposed annual budget every year as a recommendation and a way to indicate policy priorities -- the federal budget is ultimately under the purview of Congress alone, which can take the presidential proposal under advisement. Indeed, Politico noted that the administration had proposed defunding the Special Olympics in its last two budgets as well. As s.e. smith wrote for Vox, the proposed cut illustrated the underlying threat to people with disabilities that the administration poses -- and distracts from other proposed budget cuts and previous administration activities that could harm students with disabilities and limit their access to quality public education.

DeVos faced strong pressure to reconsider the budget line, both in the hearings and from media, and was asked clarifying questions about the reasons for the defunding proposal. She struggled to defend the decision, completely and awkwardly ignoring questions from at least one CNN reporter and engaging in the Trump administration’s signature deflection tactic of attacking the media instead. Meanwhile, a Trump campaign spokesperson pivoted to bizarrely attacking Democrats’ support for abortion.

Eventually, after multiple days of negative public attention, Trump reversed his administration’s long-held position on cutting the funding. The president told reporters last Thursday that he had “overridden” his own administration and had “authorized a funding of the Special Olympics,” saying that he had “heard about it this morning.” At best, this means Trump had no idea what his own administration was up to until reporters and members of Congress pointed it out. At worst, Trump was well aware of the cut and didn’t care about it until he looked bad publicly -- and was willing to throw DeVos under the bus to fix things.

This episode showcased, once again, not just the Trump inner circle’s signature moral repugnancy but also its overwhelming ineptitude.

How was it framed by some in media?

After Trump abruptly announced the proposed budget change, some blue-checkmarked reporters and media figures immediately started tweeting his breaking news quotes for impact and virality -- a common industry-wide practice. The unintentional effect was a series of tweets that together reframed the news story positively for Trump.

Rather than making clear that Trump was reversing his own proposed budget, which does not determine actual funding levels regardless, the tweets portrayed Trump as the savior of the program -- a hero willing to fight his own bureaucracy to protect what he cared about. It amounted to passively spreading misinformation.

And news organizations also piled on.

Some headlines and cable news chyrons followed the same pattern: they either quoted the president with no context on the shameless pivot or actively framed him as heroically bucking bureaucracy. 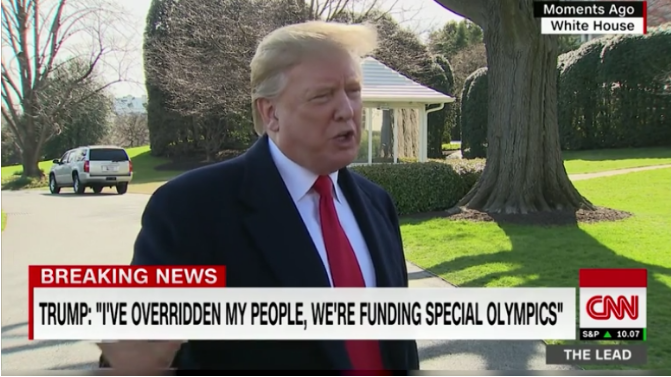 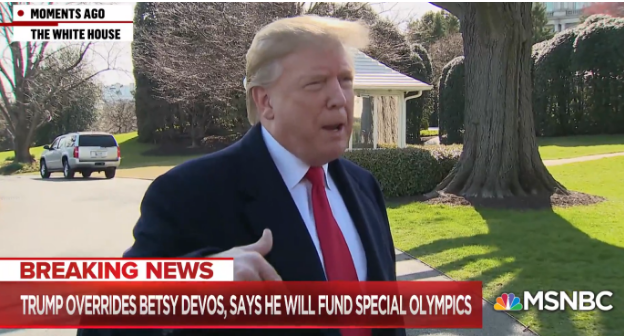 Surely not all context about the issue can fit in a headline or a tweet. But a few extra words can go a long way in better serving news audiences; some news organizations were able to do it just fine.

Every tweet, headline, push notification, and chyron counts. Even if context is provided in subsequent reporting, or in different chyrons or an accompanying discussion, that is not enough. The essential framing has to be right.

Media have a responsibility to serve an audience that we know is trying to catch up on the news by glancing at the TV screens (maybe in public, with the sound off, even) and scrolling quickly through tweets, push notifications, or headlines. Reporters covering this should distill what’s most relevant and accurate to a busy, distracted public that’s relying on them. Otherwise, they’re doing the work of the president’s communications shop.