The Republican Party’s plan to gut the Affordable Care Act (ACA) will disproportionately hurt people of color -- a fact television and print news outlets have almost completely ignored in their coverage of ongoing health care debates.

On May 4, President Donald Trump held a White House celebration with a predominantly white group of Republican members of Congress after the House of Representatives voted to fund tax cuts for high-income earners by cutting health care subsidies and loosening patient protections benefitting low- and middle-income Americans. On May 8, The New York Times reported that 13 white Republican men would draft the Senate’s version of a health care reform bill, which remained shrouded in secrecy until it was released on June 22. Almost as if taking their que from the GOP, broadcast and cable news outlets made little effort over the same time period to invite diverse guests to discuss the health care bill despite dedicating significant coverage to the issue.

In fact, according to new research from Media Matters, news outlets have almost completely ignored how GOP health care plans would disproportionately impact people of color. A Media Matters review of the major broadcast and cable news providers available via Nexis (ABC, CBS, NBC, PBS, CNN, Fox News, and MSNBC) found only three significant stories from May 4 through July 9 on the health care bill’s disproportionate impact on communities of color. All three stories appeared on MSNBC's weekend program Politics Nation. Media Matters conducted the same analysis of five major print newspapers via Nexis and Factiva (Los Angeles Times, The New York Times, USA Today, The Washington Post, and The Wall Street Journal) and found only four print articles -- three in the Times and one in the Post -- highlighting that the GOP plans to repeal and replace the ACA would harm these already disadvantaged communities.

One of the few pieces discussing communities of color was an in-depth June 6 report (published in-print on June 11) in The New York Times on an overlooked HIV epidemic in African-American communities in southern states. Phill Wilson, president of the Black AIDS Institute, told the Times that ACA repeal would halt momentum for treating HIV and that he feared people would die if coverage was taken away. From the article:

“The key to ending the AIDS epidemic requires people to have either therapeutic or preventive treatments, so repealing the A.C.A. means that any momentum we have is dead on arrival,” said Phill Wilson, chief executive and president of the Black AIDS Institute, a Los Angeles-based nonprofit. “For the most vulnerable, do we end up back in a time when people had only emergency care or no care and were literally dying on the streets? We don’t know yet, but we have to think about it.”

The nonpartisan Congressional Budget Office (CBO) projected the Senate’s health care overhaul would result in 22 million fewer people with health insurance by 2026, including 15 million fewer low-income Americans being enrolled in the Medicaid program. Communities of color are disproportionately likely to receive Medicaid and restrictions could leave millions of people in disadvantaged communities at a loss. The Commonwealth Fund reported in August 2016 that communities of color benefitted greatly from the ACA’s provisions aimed at reducing health care inequality, and those communities could be hammered by GOP proposals to roll back successful reforms: 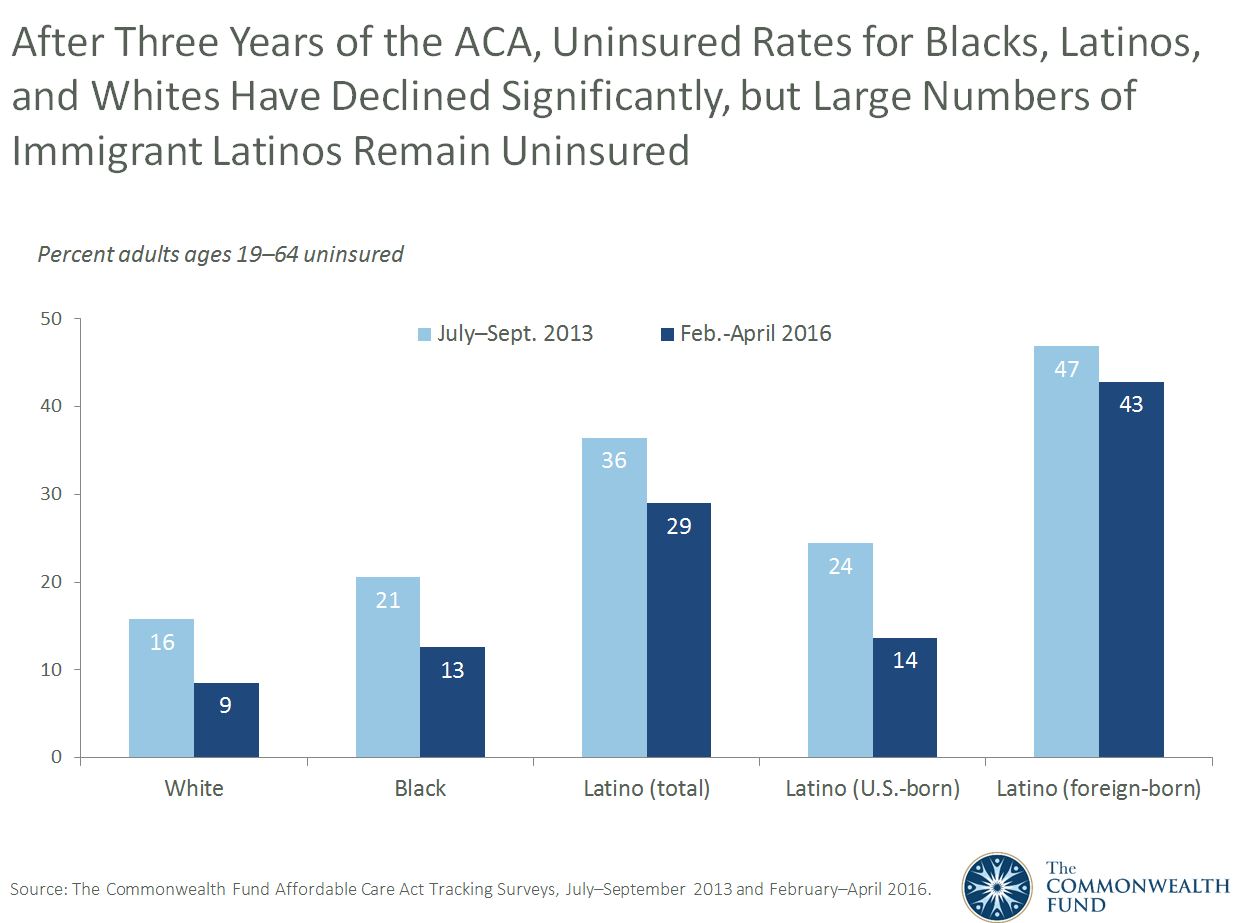 According to HuffPost contributor Richard Eskow, a senior fellow with the progressive group Campaign for America’s Future, Republican plans to gut the ACA “will disproportionately harm people of color” while the 400 wealthiest families in the United States would receive an average tax cut of $7 million. It is because GOP plans so directly harm people of color that journalist Vann Newkirk wrote in The Atlantic that health care is a civil rights issue for millions of Americans. On the July 10 edition of MSNBC’s Politics Nation, Newkirk discussed the importance for expanding access to health care as a means of reducing economic and health disparities that have existed along racial lines for generations:

Republican plans to repeal the ACA will exact an extraordinary toll on millions of Americans, and will have a disproportionate impact on people of color, women, and the LGBTQ community. That is why it is more important than ever for news outlets to contextualize this human cost.

Media Matters conducted a Nexis and Factiva search of print editions of the Los Angeles Times, USA Today, The New York Times, The Washington Post, and The Wall Street Journal from May 4 through July 9, 2017. Media Matters also conducted a Nexis search of transcripts of broadcast and cable news programs on ABC, CBS, NBC, PBS, CNN, Fox News, and MSNBC over the same time period.

We identified and reviewed all broadcast and cable news segments and non-editorial articles that included any of the following keywords: black or African-American or African American or hispanic or latina or latino or Asian or racism or racial or native american or people of color or indian or pacific islander within 10 words of health care or healthcare or health reform or AHCA or Trumpcare or American Health Care Act or ACA or Obamacare or Affordable Care Act or CBO or BHCA or Medicaid.