On the same day former FBI Director James Comey testified before the Senate intelligence committee, the House voted to rip financial protections from millions of American consumers. The scant attention major news programs on the largest cable and broadcast outlets gave this crucial piece of legislation in the lead up to its passage highlights how little time major media outlets have dedicated to covering the Republican Party’s radical policy agenda amid the scandals emanating from the White House.

On June 8, the Republican-led House passed the Financial Creating Hope and Opportunity for Investors, Consumers and Entrepreneurs (CHOICE) Act -- or simply, the “Choice Act” -- which would gut many of the consumer protections enshrined in the Dodd-Frank Act of 2010. The Choice Act targets a series of reforms designed to prevent taxpayers from being forced to bail out “too big to fail” institutions in the midst of another financial crisis similar to what happened in 2008. It also weakens the Consumer Financial Protection Bureau (CFPB), a watchdog institution set up by former President Barack Obama’s administration to protect American consumers.

According to a synopsis published by Vox, the Choice Act would “eviscerate” reforms designed to “make a repeat of the 2008 [financial crisis] scenario less likely.” The reforms established new processes for the orderly liquidation of large financial institutions and implemented extra supervision and scrutiny for firms that pose systemic risk to the financial system. The legislation also sharply curtails the CFPB, which, as Mic explained, would make it easier for consumers to be abused by financial institutions. The CFPB and its director are seen as one of the few checks on Wall Street left in the federal government, and have been subjected to constant attack from right-wing media outlets and conservative politicians.

Print and online news outlets such as the Associated Press, Business Insider, CNNMoney, The Hill, and ThinkProgress have covered the Choice Act fairly comprehensively, but the sweeping legislative changes it would implement barely broke through on TV. According to a Media Matters analysis, in the five weeks since the Choice Act advanced from the Financial Services Committee to a final floor vote in the House, the legislation has been mentioned just seven times during weekday prime-time cable news programs. It drew just one mention during weekday broadcast evening news programs: 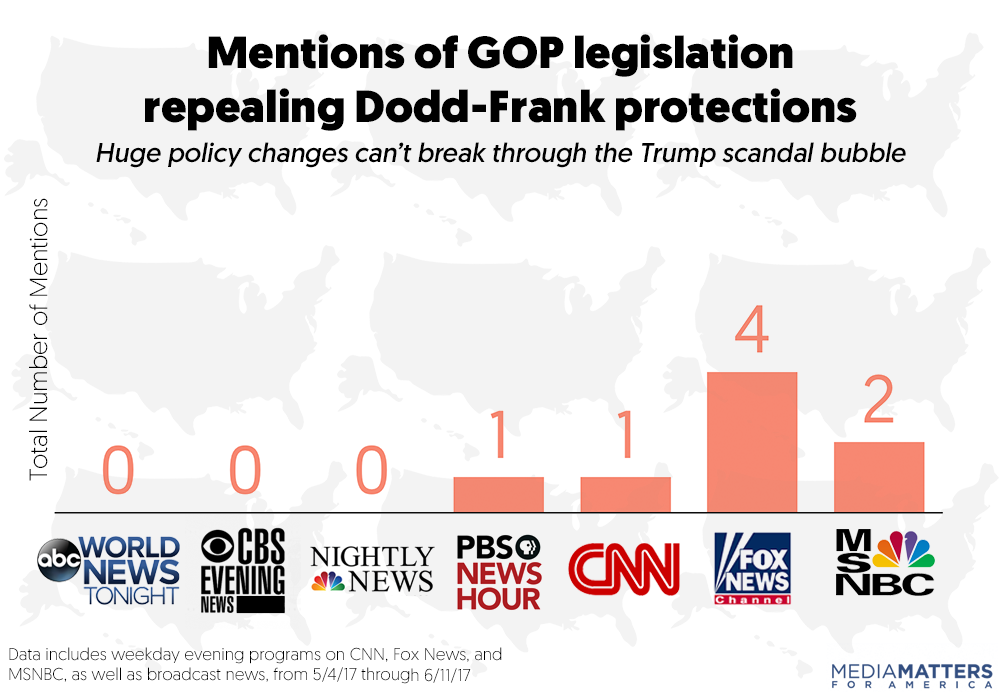 The Choice Act got in under the radar even though a coalition of 20 state attorneys general, numerous independent advocacy groups, and a wide array of experts opposed it. In a blogpost for Economic Policy Institute, economists Josh Bivens and Heidi Shierholz explained that the problems with the Choice Act go far beyond its unnecessary repeal of consumer protections enshrined in Dodd-Frank, and Ed Mierzwinski of the Public Interest Research Group criticized aspects of the law that would rescind protections available to military veterans and servicemembers. Financial regulatory expert Aaron Klein of The Brookings Institution wrote a column for Fortune slamming the Choice Act for limiting consumer access to information. The Southern Poverty Law Center also hit the legislation, decrying it for weakening oversight on predatory lenders who exploit low-income communities around the country.

Rather than covering the Republican agenda to roll back consumer financial protections -- which Speaker of the House Paul Ryan has labeled his party’s “crown jewel” -- major national media outlets have been almost entirely consumed by the hastening pace of developments in investigations of possible collusion between Trump’s political team and the Russian government. The investigation coincided almost perfectly with Choice Act deliberations: Comey’s May 3 testimony before the Senate dominated news coverage for days, his shocking May 9 firing dominated the news for weeks, and his June 8 testimony -- on the same day the Choice Act was passed -- generated so much attention it was compared to major sporting events. Indeed, the truly damning characterizations Comey made of Trump under oath may influence the public’s perceptions of the White House for the remainder of the Trump administration.

This is not the first time discussions about the GOP’s policy agenda have been overwhelmed by media coverage of the Trump administration’s scandals. In March, when the White House was rolling out potentially ruinous economic policy proposals, media attention was fixated instead on Trump’s false accusation that Obama had illegally wiretapped him. Though extensive media coverage is warranted for the Trump-Russia saga and other scandals surrounding the administration, the actions of Congress should not be allowed to proceed virtually unnoticed when so much is at stake.

Media Matters conducted a Nexis search of transcripts of broadcast evening news and cable prime-time (defined as 6 p.m. through 11 p.m.) weekday programs on CNN, Fox News, and MSNBC from May 4, 2017, through June 9, 2017. We identified and reviewed all segments that included any of the following keywords: Dodd Frank or Dodd-Frank or Choice Act or CFPB or (financial w/10 regulation!).