Cable news and legacy media outlets flocked to Orlando, FL, on June 18 to cover yet another rally for President Donald Trump but ignored the presence of the far-right, extremist group Proud Boys among Trump’s supporters. By not reporting on the group, media failed to contextualize the violent extremism within Trump’s coalition and the campaign’s silent embrace of it.

While the Orlando rally was no different from the 59 other Trump has held since he became president, media at large fell for his gimmick of rebranding the event as the official launch of his 2020 reelection campaign, showering the president with coverage. And while the presence of Proud Boys got the attention of a few reporters tweeting from the event (some of whom uncritically amplified claims from members of the extremist group), cable news networks CNN and Fox News failed to mention them.

The welcome exception was MSNBC, which had a more in-depth segment that discussed the Proud Boys and Trump’s “appeal to white supremacists” during the June 19 edition of Deadline: White House, and continued to cover the presence of the extremist group at the rally during The Beat and All In with Chris Hayes.

The most prominent national newspapers didn’t fare much better. The Washington Post only gave the group a passing mention in its three pieces about the event, using the same lines in every piece:

This phrasing left out the context in which the group members were stopped by police: They were prevented from reaching a gathering of anti-Trump protesters. The group has a record of premeditated violent behavior against anti-Trump protesters and anti-fascist activists.

Members of the white supremacist Proud Boys group have been stopped from reaching anti-Trump protesters. pic.twitter.com/c3wXFhMIcM

The New York Times did not mention the presence of Proud Boys at Trump’s rally in any of its six pieces written about the event, nor during the June 19 edition of its podcast The Daily. It’s a puzzling omission considering it was one of the Times’ own correspondents covering 2020 elections who reported on Twitter about the Trump campaign’s silent embrace of the extremist group.

From a disillusioned GOP operative: ‘The Trump campaign is well aware of the organized participation of Proud Boys rallies merging into Trump events. They dont care. Staff are to treat it like a coalition they can’t talk about.’ https://t.co/eexJTBgwxD

It is not hyperbolic to call the Proud Boys an extremist gang. There is ample evidence that the group is prone to violence, as its founder Gavin McInnes once explained:

Gavin McInnes brags that Proud Boys is a “gang”and explains the levels of this gang. Says the highest degree is “you get arrested or in a serious violent fight for the cause.” pic.twitter.com/hd1vU32qqo

McInnes claimed in late 2018 that he was quitting the group, but his graphic misogyny and violent views are also his group’s core ideology. Proud Boys has claimed that women’s primary role in society is to “stay home and make more babies” and its members have been recorded “brutally beating and kicking several individuals.” Violence is, in fact, a requirement to become part of Proud Boys, and McInnes himself has said he “cannot recommend violence enough. It is a really effective way to solve problems.” Even at the Trump rally, the group was heard chanting in defense of Chile’s late far-right murderous dictator Augusto Pinochet, known for throwing political dissidents from helicopters:

Large contingent of Proud Boys marching next to the Amway Center, chanting, “Pinochet was right,” and “Roger Stone did nothing wrong.” #TrumpInOrlando #TrumpRallyOrlando pic.twitter.com/vFgDyOcq1W

The day of the rally, a HuffPost journalist was doxxed in a Telegram app channel associated with Proud Boys, and there was a veiled call to harass her for her coverage of Gab, a social media site where extremism and white supremacy run rampant. 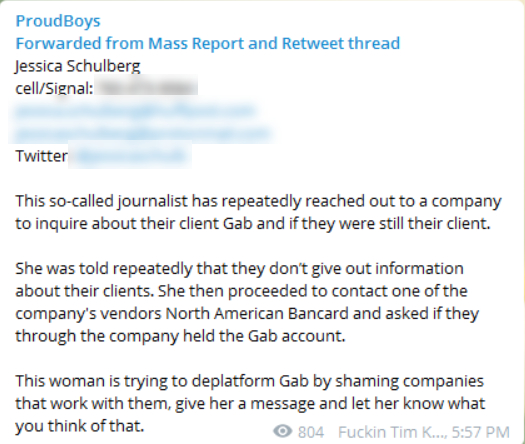 But most legacy media and cable news seemingly didn’t consider Proud Boys’ presence at the president’s rally newsworthy, nor deemed its past and present extremism worth contextualizing -- even as Trump and his Party have embraced it.