Special counsel Robert Mueller’s Wednesday statement served as an indictment of the press for its failure to effectively convey the damning conclusions of his investigation into Russian interference in the 2016 presidential election to the public and its willingness to accept the dishonest spin of President Donald Trump and the members of his administration. But the behavior of many major news outlets since Mueller stepped down from the Justice Department’s lectern suggests that few lessons have been learned, and journalists continue their business-as-usual practice of filtering their coverage through the lens of Trump’s deceptive critiques.

New York Times reporter Peter Baker’s analysis is a key example of journalists reporting on Mueller’s statement as a good faith disagreement between Democrats and the president. The story appeared online on Wednesday under the headline “Mueller Delivered a Message. Washington Couldn’t Agree on What It Was,” and it was splashed across the paper’s front page the next day. “At long last, the sphinx of Washington spoke on Wednesday,” Baker wrote, “and here is what President Trump heard: ‘Case closed.’ Here is what the president’s adversaries heard: ‘Time to impeach.’”

These are statements that can be assessed for their accuracy, with the reporter concluding that one party’s interpretation is correct. Instead, Baker chose to examine the remarks from both sides and then all but throw up his hands in dismay, framing his story as a case of Washington partisans simply failing to agree on the facts. But the Times scribe’s own reporting in the piece showed that Trump is not credible when he discusses Mueller’s probe. As Baker noted, Mueller’s statement “effectively refuted Mr. Trump’s no-collusion, no-obstruction mantra,” demonstrating the president’s mendacity. He also wrote that the special counsel “implied that Congress could pursue impeachment without directly recommending it,” thus supporting the opinion he ascribed to “the president’s adversaries.”

Baker’s piece rewarded what Washington Post opinion writer Greg Sargent has called the Trump administration’s “full-saturation propaganda casting the investigation itself as the real crime — disinformation designed to blot out shared agreement on the most basic facts about what just happened before all of our very eyes.”

This is why journalists can't simply stand in the middle between warring parties — Barr vs. the House — and report what they say. Stakes are too big. For without 'shared agreement on the most basic facts,' journalism itself becomes impossible or pointless. https://t.co/dWl1hTPcnR pic.twitter.com/BceINj7TOL

This style of political journalism -- setting out the claims of both the Trump administration and its critics and leaving it to the reader to decide which interpretation is correct -- simply doesn’t work in the face of Trump’s systemic disinformation.

Trump and his allies know that they can take advantage of this media vulnerability by offering arguments in bad faith on every last detail. This pushes reporters to cover stories with an “on the one hand, but on the other hand” frame, leaving the public confused about basic facts.

This vulnerability is particularly acute when it comes to headlines -- the only part of a story that most people actually read. Since journalists tend to treat a politician’s statements as intrinsically newsworthy, Trump’s comments are often quoted without context in headlines. That pattern held true yesterday, as several major news outlets produced headlines quoting Trump’s “case is closed” reaction to Mueller’s statement without any context: 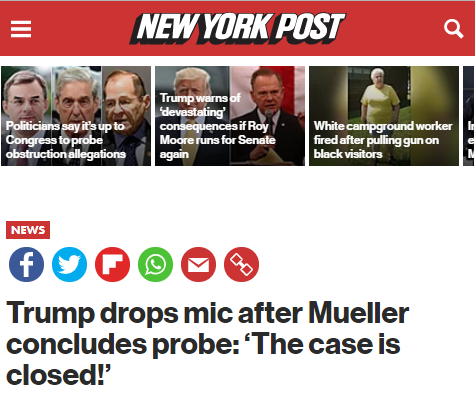 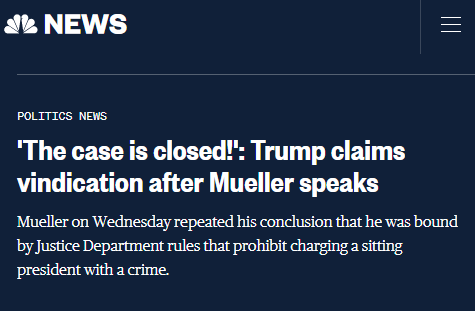 This pattern of amplifying the president’s claims continued the next day. Speaking to reporters on Thursday morning, Trump laid into Mueller with a fact-free screed, calling him a “true never-Trumper” who “should have never been chosen” as special counsel because he is “totally conflicted.” While the president’s allies have been pushing Mueller’s purported conflicts for years as a way of delegitimizing his investigation, those claims have long been debunked. But that didn’t stop a flurry of tweets from major media outlets promoting his claims in tweets:

Pres. Trump slams special counsel Robert Mueller Thursday, saying he “should have never been chosen” to lead the investigation into Russian meddling in the 2016 election, a day after the longtime DOJ official made his first public statement on Russia probe https://t.co/lr99o4qFVP pic.twitter.com/39GFfdPMbw

Pres. Trump on special counsel Robert Mueller: “I think he is a total conflicted person. I think Mueller is a true never-Trumper. He's somebody that dislikes Donald Trump.” https://t.co/3yIHo6manX pic.twitter.com/DjBVpG401d

President Trump: “There's no obstruction, there's no collusion, there's no nothing. It's nothing but a witch hunt. A witch hunt by the media and the Democrats, they're partners.” pic.twitter.com/a7BEX3Wo7r

And their on-air chyrons:

Houston, we have a chyron problem

(and it's not just Fox ... though, they're the worst) pic.twitter.com/F9kYFKt6CX

Meanwhile, the president’s right-wing media allies continued hammering the message of Mueller’s malfeasance to their huge audiences, depicting the special counsel as a “sleazy and dishonest” “Trump-hating partisan” who participated in a Democratic plot to “steal” the 2018 midterm elections.

The propaganda machine marches on, and credible news outlets aren’t doing nearly enough to hold back its disinformation.