Wash. Post: GOP “Tumbles Toward Anarchy” As Trump Lashes Out At Paul Ryan For Revoking His Support. An October 10 article in The Washington Post reported that the Republican Party is “tumbl[ing] toward anarchy” in the wake of “an extraordinary display of personal animus” between Republican presidential nominee Donald Trump and House Speaker Paul Ryan (R-WI), which “destroy[ed] any semblance of party unity.” According to the Post, Trump “publicly lashed out at the speaker” after Ryan announced “he would no longer defend or campaign with Trump,” which many GOP leaders echoed, saying “they could no longer stomach [Trump] because of his character traits and tawdry campaign tactics.” Trump’s “blistering method” of lashing out at his opponents -- both Democrat and Republican -- is being orchestrated by campaign CEO Steve Bannon, the former head of Breitbart News, who has “urged Trump not to worry about any cleavage in party ranks and instead to target Clinton,” as the Post reported. [The Washington Post, 10/10/16]

New York Magazine: Trump’s Bannon-Orchestrated Paul Ryan Attacks Have“Deeper Roots” Than Ryan’s “‘Disloyalty’” And Give “Alt-Right Types The Campaign They’ve Been Dreaming Of.” New York magazine’s Margaret Hartmann explained that Trump’s attacks on the speaker may have “deeper roots” than Ryan’s “‘disloyalty,’” pointing to an article from The Hill that published internal Breitbart emails in which Bannon called Ryan “the enemy” and claimed the “long game is [Ryan] gone by spring.” From the October 12 article:

A day after Paul Ryan told GOP lawmakers it’s every man for himself when it comes to the fallout from grab-’em-by-the-pussy-gate, on Tuesday morning Donald Trump took to Twitter to accuse Establishment Republicans of hampering his effort to Make America Great Again. 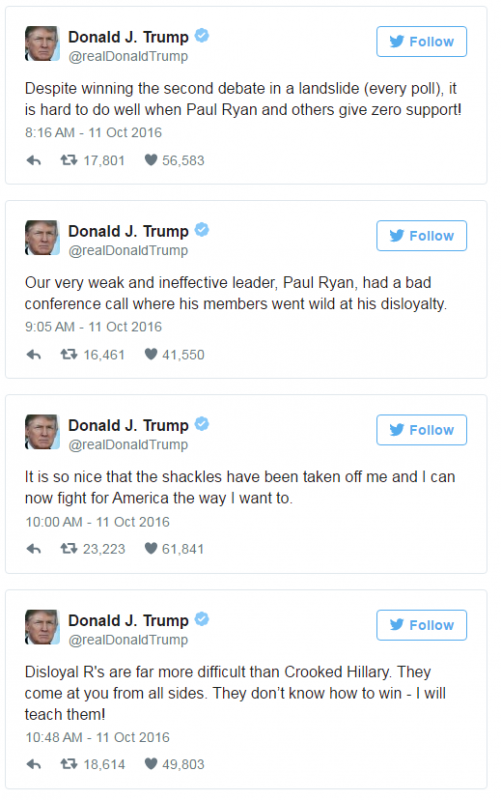 Obviously, Trump was mainly retaliating against Ryan for his “disloyalty,” but their feud may have deeper roots. On Tuesday, The Hill published an email that appears to show Stephen Bannon, who is now Trump’s campaign CEO, discussing efforts to make Ryan lose his Speakership.

In the December 1 email, sent when Bannon was still chairman of Breitbart, Matt Boyle, Washington editor for the right-wing news outlet, suggests that they should run a story promoting Ryan’s overhaul of the mental-health system.

“I get that,” Boyle answered, “but this is a place where we can open a bridge to Paul Ryan — we’re playing the very long long long game Steve.”

Bannon replied: “Long game is him gone by spring.”

A source also tells The Hill that Bannon would often declare, “Paul Ryan is the enemy.”

This is the first suggestion that Bannon had a time frame in mind for Ryan’s ouster, but his particular disdain for the House Speaker is well known. Previously, The Hill reported that Bannon wanted to take down Ryan from the very start:

Bannon made clear to Breitbart staffers that he wanted to destroy Ryan’s political career and what he called his “globalist” agenda. Shortly after Ryan became Speaker last October, Bannon began instructing reporters to look for ways to take him down. That effort culminated earlier [in August] in an unsuccessful bid to unseat Ryan in his Wisconsin primary, with the challenger heavily promoted in Breitbart coverage.

It’s possible that Trump concluded that Ryan is “very weak” and “ineffective” based solely on their recent interactions, with no knowledge of his campaign CEO’s long grudge against the Speaker. But it’s more confirmation that Trump will spend the remaining weeks of the election giving alt-right types the campaign they’ve been dreaming of. [New York magazine, 10/12/16]

Breitbart News: “Paul Ryan Running Scared in Final Days Ahead of Primary Election.” Breitbart News claimed that Ryan was “terrified” of his upcoming primary race because his “policy record is collapsing among voters.” The article claimed “Ryan is reeling right now” in his campaign and that he is “a champion of open borders.” [Breitbart News, 8/4/16]

Breitbart News: Ryan Is A “Double Agent” Joining In On “Hillary’s Attacks Against Trump.” Breitbart News denounced Ryan for “join[ing] in on the pile on” after “the media’s practically round-the-clock coverage of [Khzir] Khan’s attacks against Trump.” The article criticized Ryan for denouncing the use of a religious test for admitting immigrants and castigated Ryan for “piling on in support of the Clinton’s anti-Trump narrative” while refusing to acknowledge mothers “whose children died as the result of the open borders immigration policies.” [Breitbart News, 7/31/16]

Breitbart News: “Paul Ryan Flees Grieving Moms Trying To Show Him Photos Of Their Children Killed By His Open Borders Agenda.” Breitbart News accused Ryan of having “fled from his guarded estate” from American mothers who “attempted to present Ryan with photos of their murdered children, and show him the true cost of his open borders agenda.” The article claimed that Ryan’s “radical position” on immigration made these mothers believe that Ryan is “disqualified from serving in Congress.’” [Breitbart News, 7/25/16]

Breitbart News: “Desperate Paul Ryan Floods Wisconsin With Misleading Television Ads.” Breitbart News claimed in an article that, “contrary to what Ryan suggested in his new television ad” for his primary campaign, he “failed to advance a strategy that would keep radical Islamic migrants from entering the United States.” Breitbart News noted Ryan’s opposition to Trump’s “proposal to temporarily pause Muslim migration” and claimed, “Given Ryan’s long history of pushing open borders immigration policies, it is perhaps not surprising that Ryan’s response following the terror attacks was to expand Islamic migration.” [Breitbart News, 7/19/16]

Breitbart News: Ryan “The Saboteur” Would Sue President Trump Over Muslim Ban But “Funded Obama’s Unconstitutional 2012 Executive Amnesty.” Breitbart’s Julia Hahn reported that “Ryan suggested that he might sue President Trump if he were to enact a temporary pause on Muslim migration.” The article called his declaration “bizarre” and denounced Ryan for “suggesting that he’ll fight President Trump if he uses the powers of the executive” when he “funded President Obama’s executive action to suspend and nullify U.S. immigration laws.” [Breitbart News, 6/17/16]

Breitbart News: “Paul Ryan Says U.S. Must Admit Muslim Migrants, Sends Kids to Private School that Screens Them Out.” Breitbart News blasted Ryan’s opposition to Trump’s “religious test,” while he “chooses to insulate his children in an academic environment that considers religion in its admissions process.” The article claimed Ryan was supporting “open borders policies for America, while giving his family the protections he denies the American public.” [Breitbart News, 5/9/16]

Breitbart News: “Paul Ryan Builds Border Fence Around His Mansion, Doesn’t Fund Border Fence in Omnibus.” Breitbart News criticized Ryan for a “two-decade-long history of promoting open borders immigration policies” while “support[ing] border fences for himself, even as he denies the American people those same protections.” The article accused Ryan of a double standard, as his “omnibus spending bill does not provide funding for the mandatory completion of a 700-mile double-layer border fence” and yet his own home “is surrounded by a tall border fence.” [Breitbart News, 12/17/15]

Breitbart News: “Paul Ryan Betrays America.” A December 16 article from Breitbart News, bylined by Bannon, called Ryan's omnibus bill and ” first major legislative achievement ... a total and complete sell-out of the American people masquerading as an appropriations bill," lamenting that the bill's passage “will boost the candidacy of the Republican establishment's preferred presidential contenders.” The article accused Ryan of “betray[ing] America” and described the bill as “fund[ing a] 'fundamental transformation of America.'” [Breitbart News, 12/16/15]

Breitbart: Ryan Is “Universally Despise[d]” By Conservatives. Breitbart News's Matthew Boyle wrote that  “the conservative base universally despises” Ryan due to "his backing of amnesty, reflected in the endorsement for the Speakership from Democrat amnesty king Rep. Luis Gutierrez (D-IL).”

Unlike Ryan, who the conservative base universally despises–thanks to his backing of amnesty, reflected in the endorsement for the Speakership from Democrat amnesty king Rep. Luis Gutierrez (D-IL)–both Roskam and Blackburn are viewed as consensus candidates who could unite the GOP. [Breitbart News, 10/11/15]

Breitbart News: “Paul Ryan Twisted Truth To Sell Budget Deal To House.” Breitbart News claimed Ryan “twisted [the] truth” in budget negotiations and “misled his colleagues in the House of Representatives about several major areas of the budget deal.” The article claimed he misrepresented “serious budget details” and “used a series of statements whose veracity is questionable at best.” [Breitbart News, 12/14/13]