After author and advice columnist E. Jean Carroll reported that President Donald Trump sexually assaulted her in the 1990s, the president's son, Donald Trump Jr., pushed a conspiracy theory that the claim was “ripped-off a plot” from a 2012 episode of NBC procedural Law & Order. Before being amplified by Trump Jr., the conspiracy theory was spread by a Twitter account associated with the QAnon conspiracy theory and another account whose content has regularly been shared by “seemingly-automated accounts.” It has also been pushed by the Daily Mail's political editor.

On June 21, Carroll wrote in New York magazine’s The Cut that 23 years ago, Trump assaulted her in a department store dressing room. According to Carroll, Trump “lunge[d] at me, pushe[d] me against the wall, hitting my head quite badly, and [put] his mouth against my lips.” She wrote that he then pulled down her tights and assaulted her. Carroll told two close friends at the time, both of whom “confirmed the allegations to New York and to [The New York] Times.”

Even though her friends confirmed that Carroll told them about the incident at the time, social media accounts and message boards have claimed that Carroll “ripped-off a plot” from an episode of Law & Order: Special Victims Unit that dealt with a similar sexual assault against an actor. However, the episode aired in 2012, well over a decade after the incident allegedly occurred.

Here’s how the smear spread from social media to message boards to some right-wing sites and to Donald Trump Jr.: 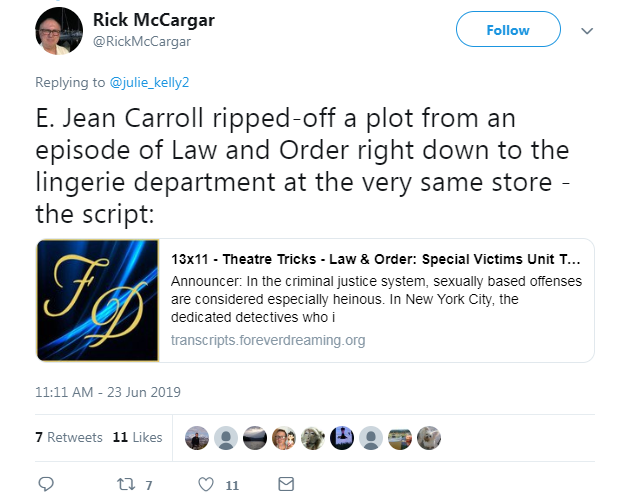 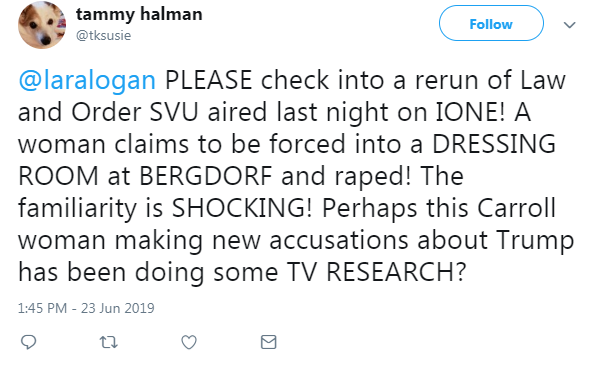 Twitter user @thebradfordfile (real name John Bradford Williams) also tweeted about the Law & Order episode. The Outline reported last year that Williams’ account has “more than 100,000 followers, a penchant for spreading far-right propaganda, and a curious network of seemingly-automated accounts regularly amplifying the reach of its tweets.” One of Williams’ former coworkers told The Outline that Williams “farms a significant portion of his engagement from direct-message based group chats on Twitter”: 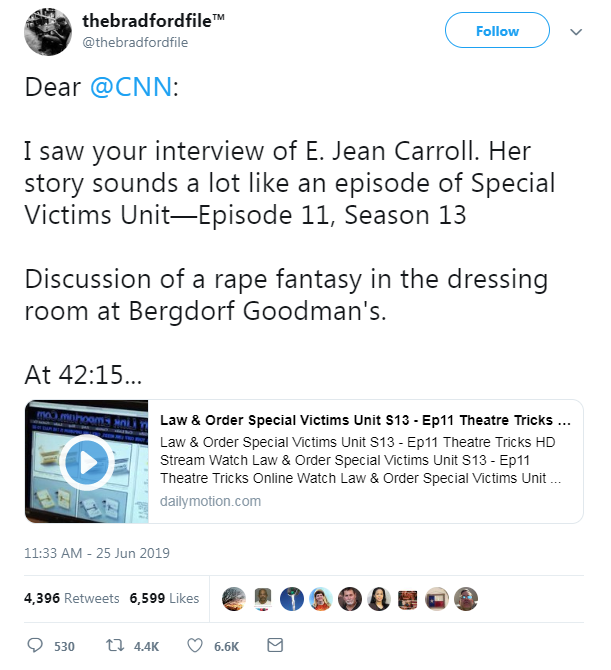 Twitter account @Trump454545 posted a clip of the episode in a tweet calling for Carroll to be prosecuted. The account's profile contains a hashtag of the abbreviated slogan for the QAnon conspiracy theory -- “where we go one, we go all” or “WWG1WGA”: 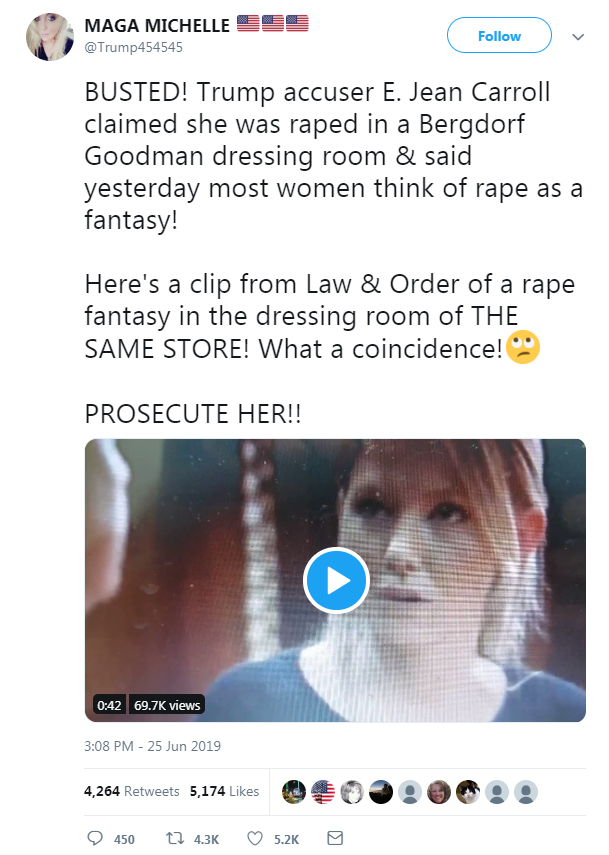 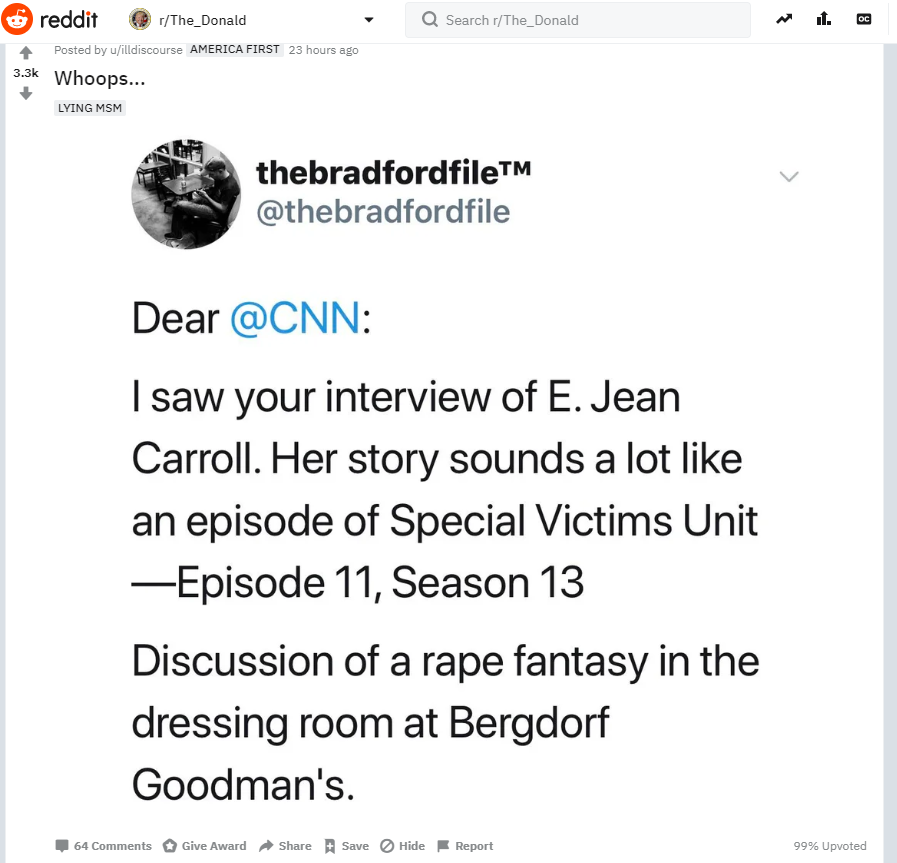 Twitter user @thebradfordfile then dug up this clip from “Law & Order: Special Victims Unit.” The detectives are interviewing a man who’s hired to play out women’s rape fantasies, and he mentions one in particular that took place … in a Bergdorf Goodman dressing room.

A user on 4chan’s “/pol/” cited the same link that @thebradfordfile tweeted earlier. 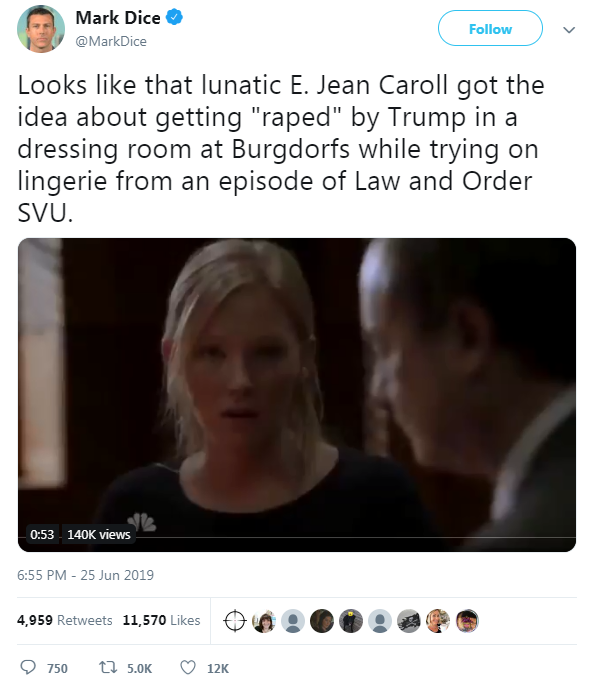 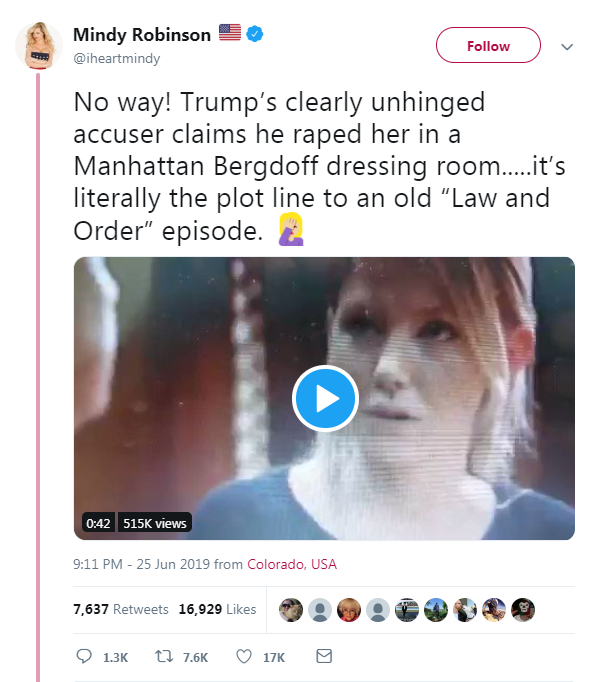 Multiple videos of the episode were posted on YouTube to push the smear: 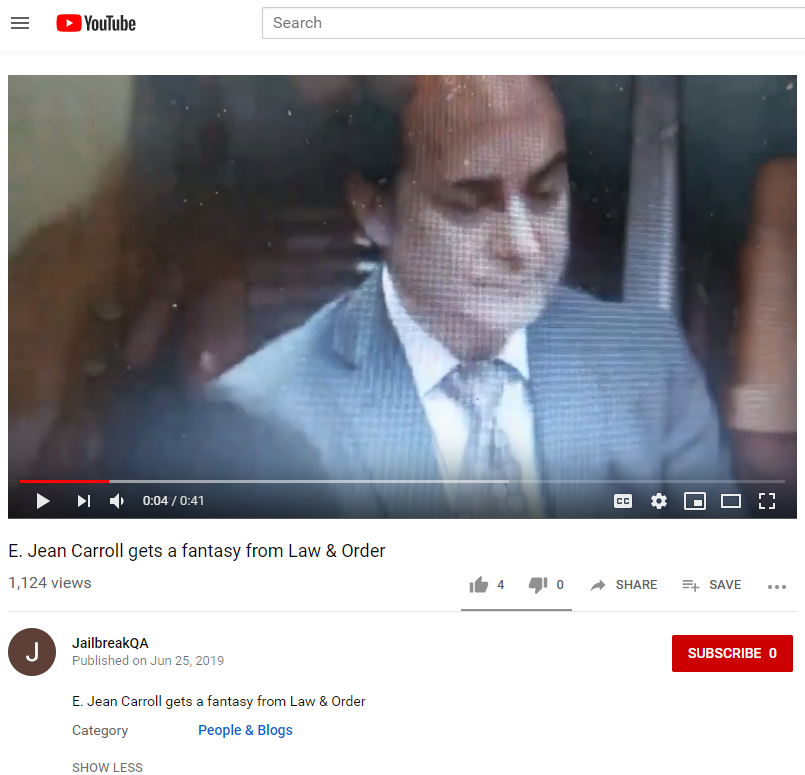 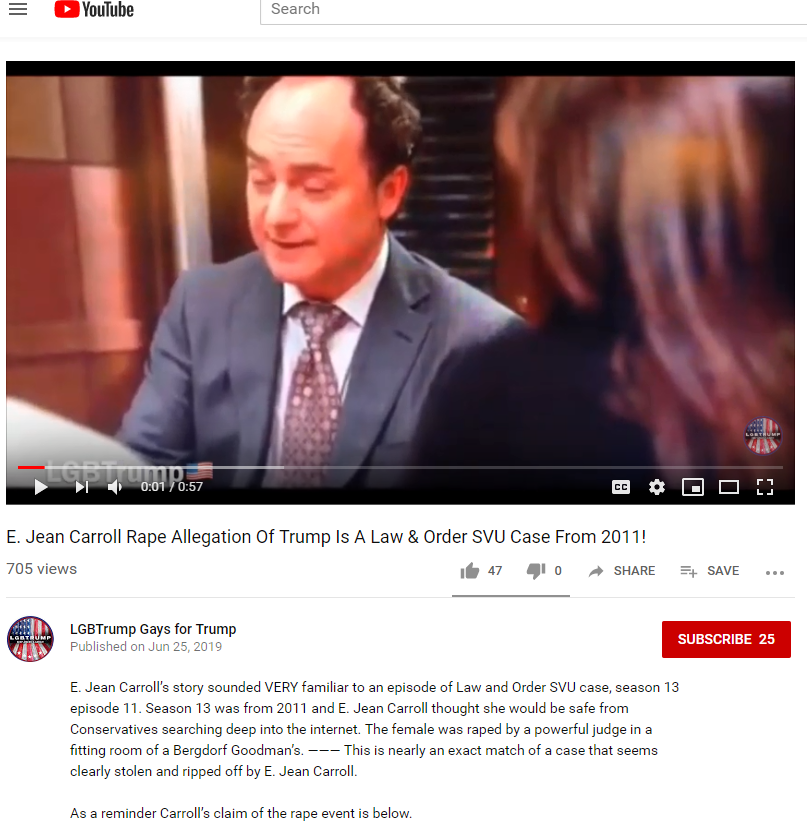 The Gateway Pundit published a piece headlined “Fraud Gets Caught! Crackpot Trump Accuser’s Story Likely Stolen from Law and Order Episode of Rape Fantasy in Bergdorf Dressing Room (VIDEO).” The article cited both @thebradfordfile and @Trump454545 to push the claim: 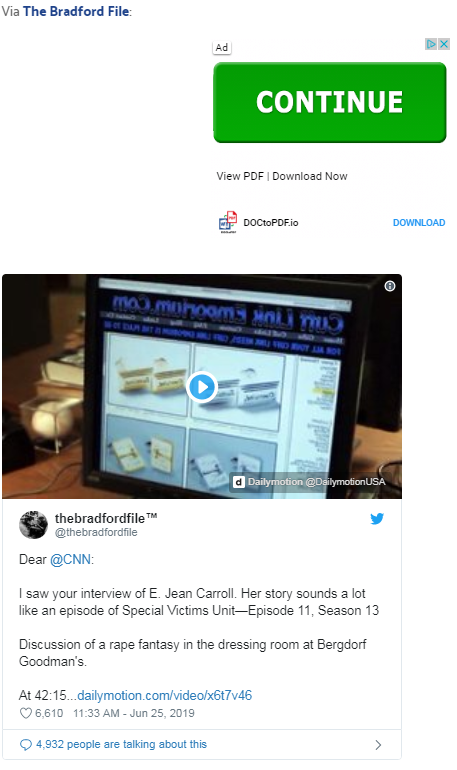 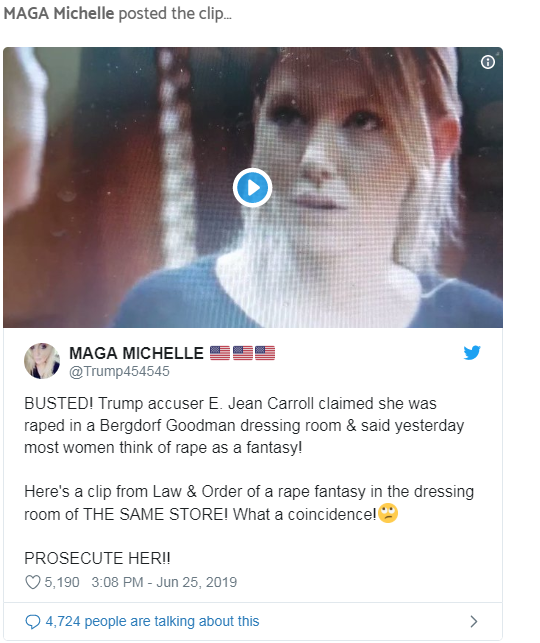 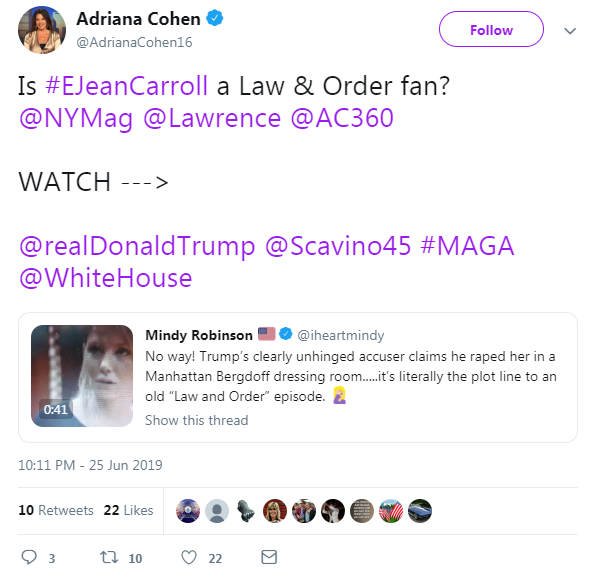 Donald Trump Jr. also quote tweeted Robinson’s post of the video to push the smear, writing, “As long as the media gives these nut jobs unfettered air time they will keep coming”: 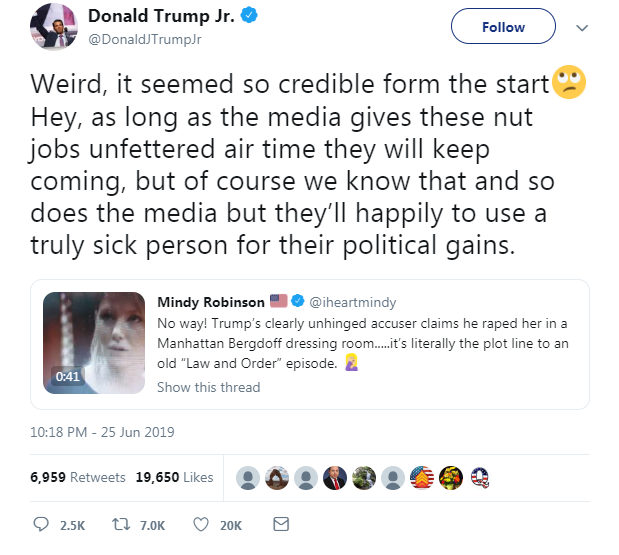 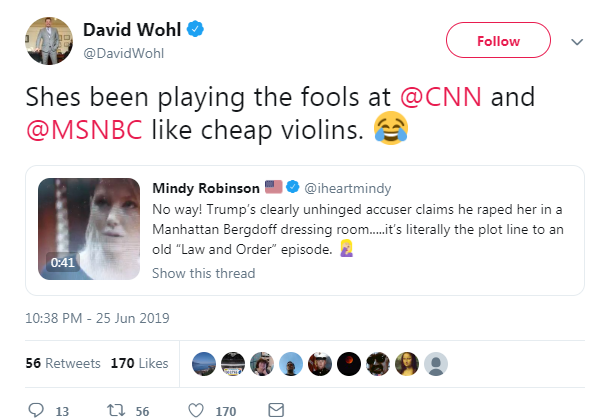 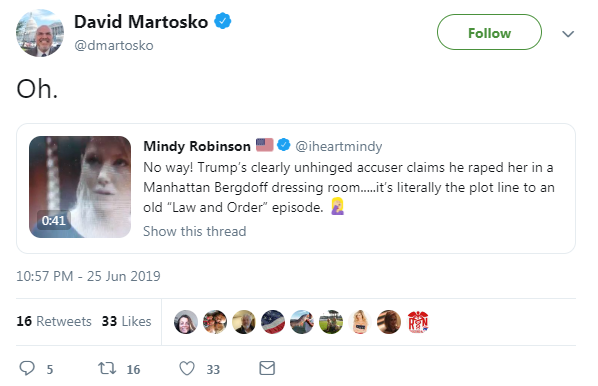 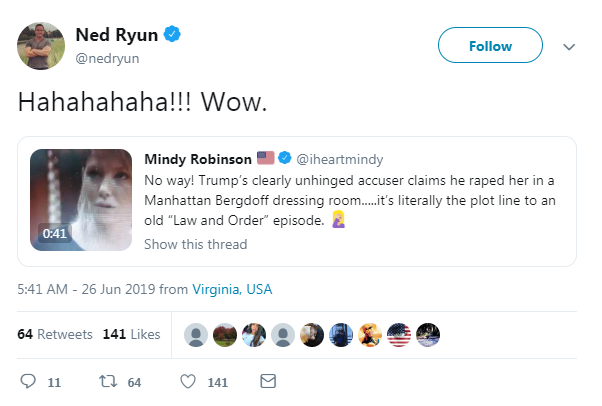 Additionally, when searching for Carroll’s name on Google (via incognito search), the phrase “e jean carroll law and order” now appears as an automatic search suggestion: 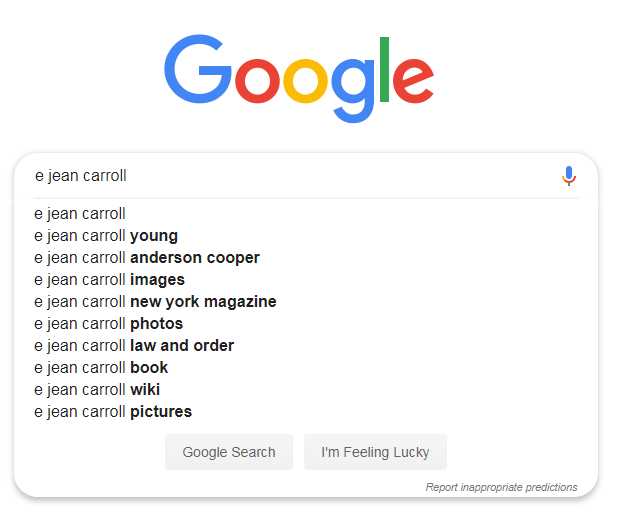