On April 27, there was a mass shooting in the Chabad synagogue in Powoy, CA synagogue near San Diego. NBC's Ben Collins and Andrew Blankstein subsequently reported that an open letter was posted on 8chan with the same name as the shooting suspect. The writer of that manifesto took credit for an unsolved arson in a mosque in San Diego; the alleged shooter is now being investigated for that arson, according to the San Diego County Sheriff.

Former assistant Secretary of State Joel Rubin appeared on Fox News to discuss the shooting. When asked why anti-Semitism is on the rise, Rubin began talking about Trump's rhetoric, before he was quickly cut off and Fox went to commercial.

Fox guest on the rise of anti-Semitism since the election of Trump: "'Jews will not replace us' was the chant in Charlottesville" in August 2017, and just the other day the president essentially said they were fair"

Last thing: In case you were wondering, there was absolutely no mention of this when Fox came back from commercial. pic.twitter.com/Q7gm9Y8gft

Fox News is currently in an advertiser crisis -- and Fox executives like Lachlan Murdoch are arguing that “straight news” programs like this one are not pro-Trump propaganda like Fox opinion shows. 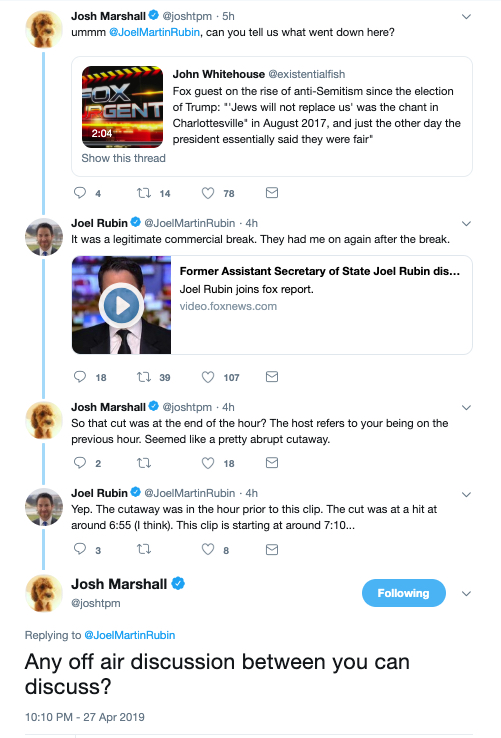