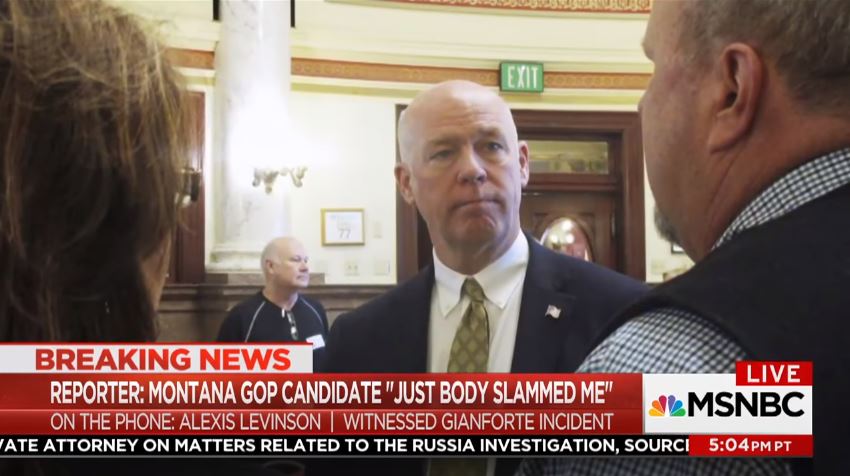 First came the body slam, as Republican congressional candidate Greg Gianforte grabbed Guardian reporter Ben Jacobs by the neck and lifted him off the ground Wednesday afternoon at a Montana campaign event. Then came the punches as Jacobs lay sprawled on the floor.

Here’s how Fox News reporter Alicia Acuna described the jaw-dropping assault. She and two of her colleagues were in the room when the Gianforte attack took place:

At that point, Gianforte grabbed Jacobs by the neck with both hands and slammed him into the ground behind him. Faith, Keith and I watched in disbelief as Gianforte then began punching the reporter. As Gianforte moved on top of Jacobs, he began yelling something to the effect of, “I'm sick and tired of this!”

The candidate, who’s running in a special election today, has been charged for the assault.

It’s all very shocking, but it's not surprising. It’s shocking that a grown man who wants to represent the voters of Montana in the halls and chambers of Congress decided to physically assault a reporter who was pressing the candidate with wonky questions about the Congressional Budget Office’s projections for the proposed GOP health care plan.

“The eye-witness accounts and the recordings have stunned us,” wrote the Billings Gazette, Montana’s largest newspaper, which withdrew its endorsement of Gianforte last night. “We must adopt zero tolerance for such behavior if freedom of expression means anything.”

But it’s not surprising.

It’s not surprising because the Republican Party, led by President Donald Trump, has been widening its war on the press at a breathtaking pace over the last two years.

Unequivocally targeting journalists as the “enemy of the people,” Trump has signaled to the party and to the larger conservative movement that it’s open season on the news media.

And during a visit to CIA headquarters, the new president bragged that he had “a running war with the media” and called reporters “among the most dishonest human beings on earth.” This while his chief strategist, Stephen Bannon, demanded the media “keep its mouth shut.”

And of course, on the campaign trail last year, Trump regularly called reporters "disgusting" and "horrible people.” His ardent followers soon picked up his cues and began raining down insults and death threats on journalists covering the Trump campaign.

And don’t forget that Trump campaign manager Corey Lewandowski was charged with simple battery of a reporter last year (the local prosecutor ultimately decided not to prosecute him), and that a Time photographer was slammed to the ground during a Trump rally.

Cumulatively, that has helped create a hothouse environment where reporters have perpetual targets on their back.

West Virginia reporter Dan Heyman was arrested on May 10 while trying to ask a question of Health and Human Services Secretary Tom Price, who later praised police for their handling of the situation.

And last week, CQ Roll Call reporter John M. Donnelly said he was pinned against a wall by security guards after trying to ask a Federal Communications Commission member a question in Washington.

Sadly, we can now add the Jacobs assault to the mounting war on the press, sponsored and promoted by today’s Republican Party.