One of Fox News chief intelligence correspondent Catherie Herridge's earliest reports on the new revelations regarding Donald Trump Jr.’s willingness to receive damaging information against Democratic presidential nominee Hillary Clinton from the Russian government edited out key parts of the email exchange that showed that Trump Jr. knew the information was indeed from the Russian government. Additonally, during reporting of Fox News' Outnumbered, host Sandra Smith praised the president’s son for “trying to make this as most transparent as possible.”

On July 11, The New York Times published the email correspondence setting up a meeting between Trump Jr. and a Russian lawyer with ties to the Kremlin. (Trump Jr., in an apparent attempt to pre-empt the Times report, released some of the emails himself on Twitter shortly before the report was posted.) In the initial email, “a trusted intermediary” wrote (emphasis added), “This is obviously very high level and sensitive information but is part of Russia and its government’s support for Mr. Trump.” Trump Jr. responded, “If it’s what you say I love it especially later in the summer.” 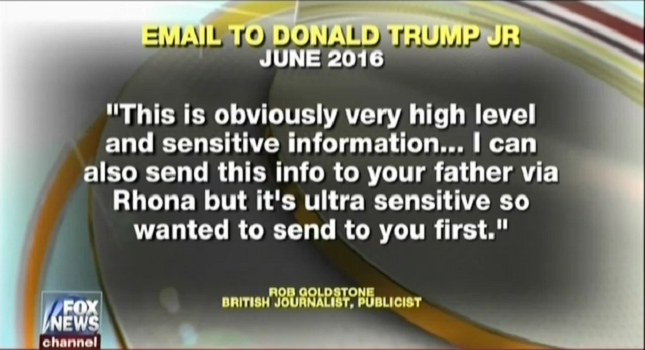 But, as the ellipses show, Herridge omitted a key section of the quote. Goldstone’s reference to “Russia and its government’s support for Mr. Trump” was not included in the on-screen graphic, and Herridge did not mention that part of the quote during her report.

Following Herridge’s report, host Sandra Smith praised Trump Jr. for releasing the emails himself and “trying to make this as most transparent as possible.” Smith also attempted to move the goalposts, asking whether there’s “any evidence” that “tells us that [Trump Jr.] reached out to anyone within the campaign immediately after receiving that email.” The question seemed to be an attempt to deflect from the fact that simply by seeking the information, the younger Trump may have violated laws barring contributions to political campaigns from foreign nationals.

Shortly after Herridge's report, co-host Meghan McCain filled in the missing quote about the Russian government, noting that it is “the biggest concern in these emails.”

Fox has consistently tried to either ignore, or downplay news surrounding Trump and Russia, and has gone as far as creating an alternate reality to distract its viewers. The network's reaction to these new developments is just the latest example.