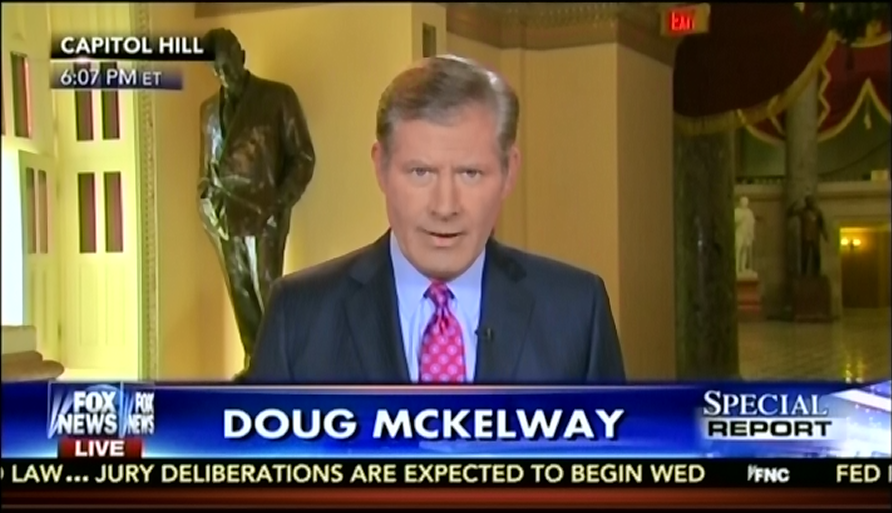 Following the violent August 2017 Unite the Right march in Charlottesville, VA, Trump argued that there were “very fine people on both sides.” According to an April 26 article in The Daily Beast, after Biden’s video mentioned these comments, McKelway immediately sought to defend the president in an email to his colleagues, partially by arguing that there were good people among the marchers:

McKelway, a nine-year Fox News veteran, sent an email to dozens of network employees, saying he was “Putting this Biden statement out there, next to Trump's original presser, and a live interview I did in C-ville with ‘good people on both sides’” to supposedly fact-check Biden. The emails were first published by FTV Live.

McKelway began his email with a Winston Churchill quote: “A lie gets halfway around the world before the truth has a chance to get its pants on.” He then proceeded to echo the pro-Trump claim that the president never said what he said about the neo-Nazis who marched at the deadly event.

McKelway contrasted portions of Biden’s script against the same quotes that pro-Trump outlets have used to claim the president never defended white nationalists. And then the reporter highlighted a quote from his own interview with Brian Lambert, an armed Unite the Right attendee, who portrayed the neo-Nazi rallygoers as victims: “They’re denying people their right to assemble. They’re denying their right to speak freely, however hateful their views may be,” he bemoaned.

The article explains that a second Fox employee, Digital Senior Editor Cody Derespina, replied to the email agreeing with McKelway and linked to another interview with a Unite the Right marcher who claimed he was “simply there to protest the removal of a statue of Confederate general Robert E. Lee.” A third respondent, Fox News Radio’s White House correspondent Jon Decker, however, noted that this marcher had chanted “Jews will not replace us” during the march. McKelway then realized the man he had interviewed also had clear white nationalist allegiances:

An hour later, a seemingly humbled McKelway returned to the thread, walking back his previous words. He linked to an article from C-Ville, a Charlottesville alt-weekly, that showed his one-time interviewee Brian Lambert was, in fact, a white nationalist who trespassed in local parks, removed tarps off Confederate statues, placed rebel flag stickers on surfaces, and flashed a white-power symbol to supporters during his sentencing hearing.

McKelway, who works for Fox News’ so-called “straight news” division, has previously defended Trump’s comments and has a history of engaging in “both sides” rhetoric himself.

In the aftermath of the Charlottesville protest, during which counter-protester Heather Heyer was killed by a neo-Nazi, McKelway asked then-Virginia Gov. Terry McAuliffe if he would “repudiate the violence that we saw Saturday from the left.” McKelway has also defended Confederate statues on-air, once arguing that anti-Confederate protesters want “airbrushing of history, a tactic of totalitarian governments” and suggesting this was a “common practice in the former Soviet Union.”