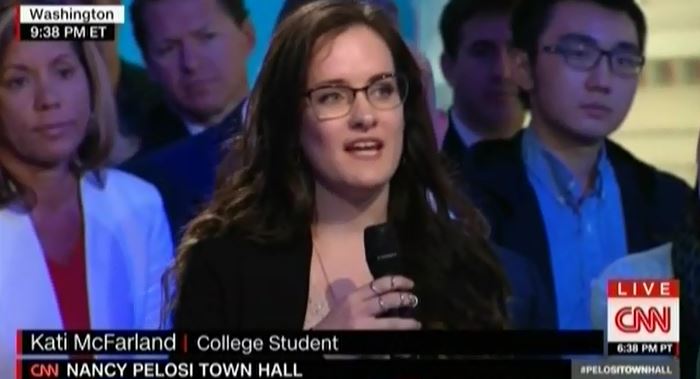 Viewers of CNN’s prime-time town hall event with House Minority Leader Nancy Pelosi (D-CA) witnessed personal stories from Americans across the political spectrum concerned about their country’s future. One person’s struggles, in particular, highlighted the life and death stakes of the Republican Party’s plans to repeal and replace the Affordable Care Act (ACA), and set a standard for contextualizing the human costs of this political debate that other news outlets should follow.

On May 15, Pelosi appeared for an hour-long town hall during which she shared her perspective on how Democrats in Congress plan to respond to the right-wing agenda set out by their Republican colleagues and President Donald Trump. Moderator Chris Cuomo opened the forum with the late-breaking bombshell that Trump improperly shared classified intelligence with agents of the Russian government and moved on to questions from the audience on a host of topics.

One person Cuomo introduced was 25-year-old college student and Arkansas resident Kati McFarland, who “made headlines earlier this year” when she confronted Sen. Tom Cotton (R-AR) at a February constituent event regarding his support for repealing the ACA. McFarland presented Pelosi with the same grim reality that she told to Cotton, stating, “Without the ACA that saved my life, without the protections of the ACA, I will die.” She also questioned what Pelosi and Democrats plan to do to stop the Republican health care agenda, the American Health Care Act (AHCA), from becoming law and putting her life at risk. From the May 15 town hall:

McFarland’s perspective as one of the millions of Americans who might lose their health insurance coverage and patient protections enshrined in the ACA is sorely lacking from broadcast and cable news coverage of the health care policy debate.

A Media Matters analysis of cable news programming from February 18-26, a week of nationwide grassroots collective actions dubbed by organizers as the “Resistance Recess,” revealed that just three of 88 guests featured during prime-time discussions of a wave of town hall protests sweeping the country were actual attendees of the events. Outlets largely relied on journalists and political pundits to discuss the optics of the burgeoning political resistance movement, rather than the people and issues leading that resistance. Shortly after the AHCA narrowly survived a vote in the House of Representatives, Media Matters called on news outlets to feature more stories about people like McFarland who are directly affected by the GOP’s health care agenda. McFarland’s appearance at CNN’s prime-time town hall is a good start, but the human consequences of the GOP’s attempt to dismantle health care reform must remain a mainstay of news coverage. For millions of Americans the end results are about far more than political calculus; this is about life or death.