The extreme anti-abortion group Operation Rescue appears to have adopted a new tactic in its quest to attack Planned Parenthood and undermine abortion access. This time the group is praising an anonymous conspiracy theorist on the 8chan message board for taking the so-called “evidence” of Planned Parenthood's alleged wrongdoing “seriously and bringing it to the attention of an audience that may otherwise never have been exposed to the truth.”

Operation Rescue is an extreme anti-abortion group with a history of spouting violent rhetoric and harassing abortion providers. Headed by longtime extremist Troy Newman, Operation Rescue has been described as an organization dedicated to “shut[ting] down abortion clinics by systematically harassing their employees into quitting” -- a goal that typically involves training anti-choice activists, developing regional spin-off groups, and ultimately assisting with smear campaigns against abortion providers such as the discredited videos created by the anti-abortion group Center for Medical Progress. Newman and Operation Rescue have also been Trump supporters; the organization named the president as the “2017 Pro-Life Person of the Year.”

Although Operation Rescue has largely stuck to this playbook for its anti-abortion activism, on January 7 the group demonstrated a new tactic: signal-boosting a series of posts from a far-right message board on 8chan that targeted Planned Parenthood.

8chan is a message board system -- similar to 4chan and Reddit -- that enables users to create and curate discussions anonymously, making them hotbeds of racist commentary and politically motivated harassment campaigns. These forums gained a reputation for being fertile ground for those in the so-called “alt-right” or white nationalist movement. In the past, 8chan has come under scrutiny for its use by certain users involved in the Gamergate movement, which involved the targeted harassment of individuals, including many women, who advocated “for greater inclusion in [video] gaming,” according to The Washington Post.

Although there has been some discussion of the 8chan sub-forum “politically incorrect” or /pol/, there are many different sub-forums on the platform. The series of posts highlighted by Operation Rescue occurred on a new sub-forum called The Storm. A user who refers to himself as Q and claims to be a “high-level government insider” began posting first on 4chan and then 8chan about a series of “intel drops — which he, for some reason, called ‘crumbs’” in order to “inform the public about POTUS’s master plan to stage a countercoup against members of the deep state.” New York magazine’s Paris Martineau called the forum a “fantasy world” where “all of the far right’s wildest dreams come true”:

Q promises that Clinton, Obama, Podesta, Abedin, and even McCain are all either arrested and wearing secret police-issued ankle monitors, or just about to be indicted; that the Steele dossier is a total fabrication personally paid for by Clinton and Obama; and that the Las Vegas massacre was most definitely an inside job connected to the Saudi-Clinton cabal. They believe all of this will be coming to a head any day now. That “The Storm” — of arrests, political turmoil, and Republican vindication — is coming.

On January 7, Q posted on The Storm that followers should “review the Congressional investigation on PP” and “be prepared for what you learn,” ending with the statement, “These people are SICK!”:

As Operation Rescue explained in its release, the “Congressional Investigation referenced is the results of the House Select Investigative Panel on Infant Lives” -- referring to a politically motivated inquiry into Planned Parenthood by anti-abortion members of the House of Representatives. Although during its 10 months of investigation, the House select panel found no substantiated evidence of wrongdoing, Operation Rescue and other anti-abortion outlets and groups have frequently promoted the panel’s final report.

Although Operation Rescue acknowledged that Q is a conspiracy theorist, or at least inspires conspiracy theories -- the anti-abortion group still praised him when one of his posts aligned with its agenda, claiming that “#Qanon is now taking on Planned Parenthood in his uniquely enigmatic way.” Most notably, the Operation Rescue report closed with a quote from Newman, seemingly lauding Q:

“We are grateful to Q and the Trump Administration for taking the evidence against Planned Parenthood seriously and bringing it to the attention of an audience that may otherwise never have been exposed to the truth. We hope the Qanon exposure helps wake up Americans to the barbarity of abortion,” said Newman. “Planned Parenthood is a corrupt enterprise that makes their money off the backs of dead babies and taxpayers. We urge Congress to defund Planned Parenthood immediately, and are praying for their speedy prosecution.”

While Operation Rescue praised mysterious poster, the post itself inspired a number of responses -- ranging widely in tone and focus. Some users generally celebrated the news and asked for more information about when “Planned Parenthood is going down”:

Others shared information from the Congressional investigation, and encouraged followers to read the full report: 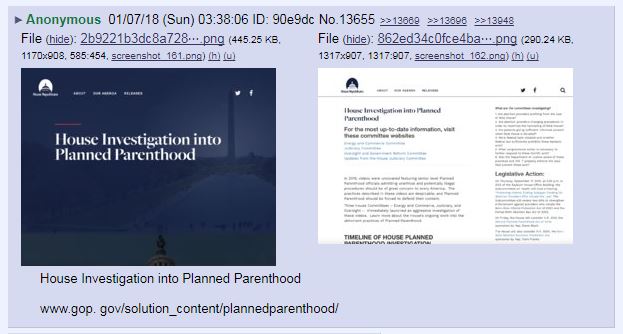 Some users even went so far as to suggest wider conspiracies about Planned Parenthood’s “blood sacrifice to Moloch and Lucifer” and the alleged use of fetal tissue in vaccines and food products:

Operation Rescue has long been extreme in its tactics, but if this latest development is any indication, the organization may be preparing to lurch into the fever swamp of far-right conspiracy theories and harassment peddled on The Storm and similar communities across various message boards. Anti-abortion harassment has already grown worse over the past few years -- and if Operation Rescue is really pivoting to the far-right message board echo chamber, there’s little reason to believe that trend will abate.