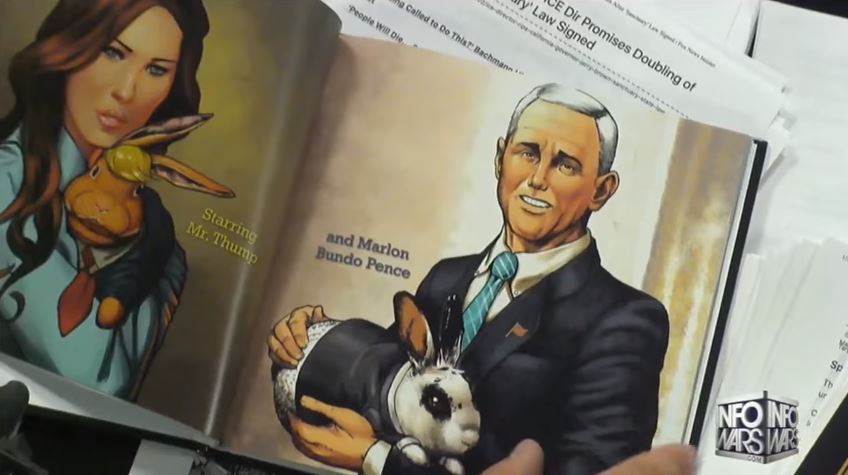 Conspiracy theorist Alex Jones is selling a “limited edition” of a children’s book that depicts President Donald Trump as a cartoon bunny named Thump. The book promotes white nationalist imagery and makes light of the video of Trump admitting to sexually assaulting women and the national outrage that followed.

The book, called Thump: The First Bundred Days, was written by a group of co-authors including Brett R. Smith, the creative director of the Steve Bannon-backed Clinton Cash: A Graphic Novel, and Timothy Lim, who has worked with Marvel, Lucasfilm, and Hasbro. The book is published by Post Hill Press, whose books are distributed by Simon and Schuster.

The online store of Jones’ conspiracy theory outlet Infowars is selling the book with an exclusive poster showing Jones and Thump and describes the product as “the perfect book for teaching your kids or reading through it for yourself!”

Jones hosted Smith for a promotional interview on January 3, and flipped through the book, revealing some of its disturbing content.

On one page that Jones showed, the text read, “Thump found friends in strange places and in all shapes and sizes. Such as the frogs that croaked ‘KEK!’ They were full of surprises!” 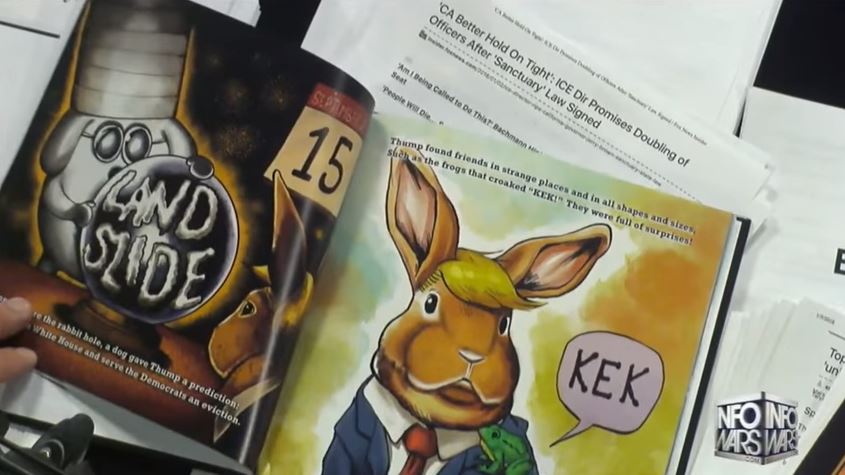 The line is a reference to Pepe the Frog, an originally innocuous cartoon that was transformed into a talisman for white nationalism during the 2016 presidential campaign.

The book also references a video released in October 2016 that showed Trump bragging about sexually assaulting women. Thump reads, “Thump was caught talking of grabbing all things pusillanimous. Protesters even made pink hats: their ire was unanimous.”

Although pusillanimous is a synonym for cowardly, it’s a reference to Trump saying that he grabbed women “by the pussy.”

During segments of the broadcast, which also featured far-right troll and “Pizzagate” conspiracy theorist Jack Posobiec, Smith explained, “We really wanted to come out with something fun and light, something that kids and adults, all Trump supporters could enjoy.”

Jones lavished praise on the book, suggesting people donate copies to their local libraries (after purchasing them from Infowars), and saying, “This is genius.” Smith added that what’s “great about Thump as well is that parents can use Thump to talk to their kids about Trump, and they can say, ‘No, Thump is a good guy, he’s the hero that we need.’”

Trump appeared on Jones’ show in 2015 to praise the conspiracy theorist’s “amazing” reputation. Since then, Jones has been a sycophantic supporter of Trump. He’s said he communicates with Trump and writes him memos, and most recently defended the president’s penis.