CNN and its chief White House correspondent Jim Acosta have sued President Donald Trump and various administration officials for violating the First Amendment when Acosta was banned from the White House. The lawsuit specifically notes that the president and White House officials have shown animus toward the media in general, and CNN and Acosta in particular. In response, the president’s lawyers have claimed the White House has not demonstrated the type of content and viewpoint discrimination that is impermissible under the First Amendment. The evidence indicates otherwise.

Throughout the first year of his presidency, Trump and his administration attacked various media outlets and journalists more than 400 times, specifically targeting CNN verbally and on Twitter dozens of times. The attacks on the media didn’t let up in 2018. These facts and the 42 examples of the Trump administration’s attacks on Acosta and CNN gathered below support the network's complaint that the Trump administration took action against Acosta and CNN for the “contents of their reporting”: 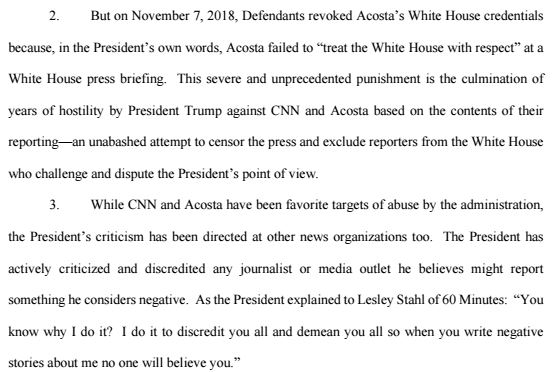 Trump: “CNN and others in the Fake News Business keep purposely and inaccurately reporting that I said the ‘Media is the Enemy of the People.’ Wrong!” [Twitter, 10/29/18]

Trump: “Facebook has just stated that they are setting up a system to ‘purge’ themselves of Fake News. Does that mean CNN will finally be put out of business?” [Twitter, 10/21/18]

Press secretary Sarah Sanders: “Can’t imagine why @CNN has such low ratings when during the day they break from live coverage to show reruns.” [Twitter, 9/4/18]

Trump: “CNN is working frantically to find their ‘source.’ Look hard because it doesn’t exist. Whatever was left of CNN’s credibility is now gone!” [Twitter, 8/30/18]

Trump: “The hatred and extreme bias of me by @CNN has clouded their thinking and made them unable to function. But actually, as I have always said, this has been going on for a long time. Little Jeff Z has done a terrible job, his ratings suck, & AT&T should fire him to save credibility!” [Twitter, 8/30/18]

Trump: “CNN is being torn apart from within based on their being caught in a major lie and refusing to admit the mistake.” [Twitter, 8/29/18]

Trump: “So funny! I just checked out Fake News CNN, for the first time in a long time (they are dying in the ratings), to see if they covered my takedown yesterday of Jim Acosta (actually a nice guy). They didn’t! But they did say I already lost in my meeting with Putin. Fake News.” [Twitter, 7/14/18]

Trump: “The Washington Post and CNN have typically written false stories about our trade negotiations with China.” [Twitter, 5/16/18]

Trump: “Check out the fact that you can’t get a job at ratings challenged @CNN unless you state that you are totally anti-Trump? Little Jeff Zuker, whose job is in jeopardy, is not having much fun lately. They should clean up and strengthen CNN and get back to honest reporting!” [Twitter, 4/3/18]

Trump: “The Fake News Networks, those that knowingly have a sick and biased AGENDA, are worried about the competition and quality of Sinclair Broadcast. The Fakers’ at CNN, NBC, ABC & CBS have done so much dishonest reporting that they should only be allowed to get awards for fiction!” [Twitter, 4/3/18]

Trump: “Bad ratings @CNN & @MSNBC got scammed when they covered the anti-Trump Russia rally wall-to-wall. They probably knew it was Fake News but, because it was a rally against me, they pushed it hard anyway. Two really dishonest newscasters, but the public is wise!” [Twitter, 2/20/18]

Trump: “Jake Tapper of Fake News CNN just got destroyed in his interview with Stephen Miller of the Trump Administration. Watch the hatred and unfairness of this CNN flunky!” [Twitter, 1/17/18]

Acosta: Sanders “issued a warning to me. She said if I asked a question of Trump at the bill signing ‘I can't promise you will be allowed into a pool spray again.’ Sorry Sarah.. we won't be intimidated.” [Twitter, 12/12/17]

Trump: “I seldom, if ever, watch CNN or MSNBC, both of which I consider Fake News.I never watch [CNN’s] Don Lemon, who I once called the ‘dumbest man on television!’ Bad Reporting.” [Twitter, 12/11/17]

Trump: “CNN’S slogan is CNN, THE MOST TRUSTED NAME IN NEWS. Everyone knows this is not true, that this could, in fact, be a fraud on the American Public.” [Twitter, 12/9/17]

Sanders on news that CNN will boycott a White House Christmas function: “Christmas comes early! Finally, good news from @CNN.” Trump quote-tweeted her, adding: “We should boycott Fake News CNN. Dealing with them is a total waste of time!” [Twitter, 11/28/17, 11/29/17]

Trump: “We should have a contest as to which of the Networks, plus CNN and not including Fox, is the most dishonest, corrupt and/or distorted in its political coverage of your favorite President (me). They are all bad. Winner to receive the FAKE NEWS TROPHY!” [Twitter, 11/27/17]

Trump: “CNN International is still a major source of (Fake) news, and they represent our Nation to the WORLD very poorly. The outside world does not see the truth from them!” [Twitter, 11/25/17]

Trump: “People are just now starting to find out how dishonest and disgusting (FakeNews) @NBCNews is. Viewers beware. May be worse than even @CNN!” [Twitter, 10/12/17]

Trump: “NBC news is #FakeNews and more dishonest than even CNN. They are a disgrace to good reporting. No wonder their news ratings are way down!” [Twitter, 10/4/17]

Trump adviser Stephen Miller during a press briefing: “Jim, that is one of the most outrageous, insulting, ignorant, and foolish things you've ever said. … It reveals your cosmopolitan bias to a shocking degree.” [Media Matters, 8/2/17; Politico, 8/2/17]

Trump tweeted a video of him knocking over a person with CNN logo imposed on his face: “#FraudNewsCNN #FNN.” [Twitter, 7/2/17]

Trump: “I am thinking about changing the name #FakeNews CNN to #FraudNewsCNN!” [Twitter, 7/1/17]

Trump: “I am extremely pleased to see that @CNN has finally been exposed as #FakeNews and garbage journalism. It's about time!” [Twitter, 7/1/17]

Then-press secretary Sean Spicer about Acosta: “I think some of these reporters are more interested in their YouTube clips than they are in getting factual news.” [Fox News, MediaBuzz, 6/25/17]

Trump to Acosta: “Your ratings aren’t as good as some of the other people that are waiting.” [WhiteHouse.gov, 2/16/17]