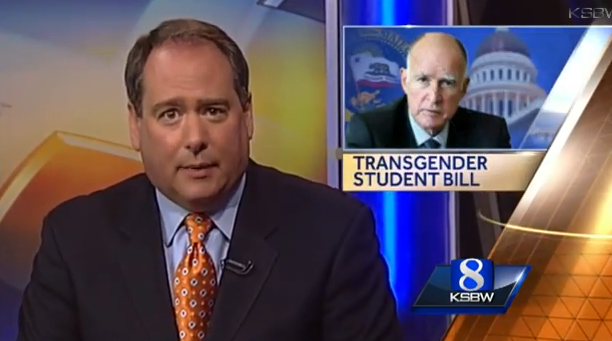 One month after taking effect, California's new law allowing transgender students to use facilities and participate in programs that match their gender identities hasn't given rise to the horror stories predicted by the right-wing media, according to school officials around the state.

On August 12, Democratic Gov. Jerry Brown signed the School Success and Opportunity Act, extending to transgender students statewide rights that had already been recognized by large school districts like Los Angeles Unified School District. The passage of the law, which took effect on January 1, catalyzed a conservative misinformation campaign featuring the false claims that transphobic bullying is "not a big problem," that the law would allow bathroom “free-for-alls” with students exploiting the law to use opposite-sex restrooms, and that harassment would spike in restrooms and locker rooms.

In an interview with Equality Matters, Dr. Judy Chiasson, Los Angeles' program coordinator for Human Relations, Diversity and Equity, said that after nine years of implementing trans-affirmative policies, Los Angeles schools haven't experienced any of the problems predicted by right-wing critics of the law.

“We have had no incidents of anybody pretending to be transgender,” Chiasson said.

As the district has for nearly a decade, Chiasson said that Los Angeles schools would determine students' eligibility for the law on a case-by-case basis, verifying that a student's gender identity has been “consistent” and “persistent.” Conservative claims that the law would let students who aren't transgender sneak into opposite-sex restrooms and locker rooms won't pan out, Chiasson said, because such claims bear no relationship to the reality of implementing transgender protections.

“We don't let children [declare] 'I'm gonna be a girl during P.E. and the rest of the day I'm going to be a boy,'” Chiasson said.

Far from creating headaches, Chiasson said, the new law is helping prevent them.

“I can assure families that a law like this solves problems. It doesn't create them,” Chiasson told Equality Matters. She cited a transgender male student who long believed he had to use the girls' restroom. That situation, Chiasson said, caused far more stress and discomfort than when he began using the boys' facilities.

And while the discredited Pacific Justice Institute - which invented a story about a transgender female harassing her peers in a Colorado high school restroom - has sought to stoke parental opposition to transgender rights, Chiasson said that Los Angeles' protections have been cheered by parents.

“Within LA Unified,” Chiasson said, “we have a legacy of being particularly LGBT-affirming. The parents have been very grateful because we're giving them a school where their children can be affirmed and recognized.”

At a recent news conference, San Diego Unified School District board president Kevin Beiser said he had worked with parents to dispel myths about the new law, and that San Diego schools will have a case-by-case process by which to determine whether a student qualifies for the law's protections.

No school district has reported an instance of inappropriate behavior stemming from the law.

A far-right coalition has gathered signatures in an effort to place the law up for a vote in the November elections. Last November, the coalition submitted over 600,000 signatures in support of a referendum. If 504,760 of those signatures are deemed valid, the law will be suspended pending the outcome of the November vote. But an initial random count found only 482,582 of the signatures valid. California officials have until February 24 to complete a signature-by-signature count.

Regardless of whether a referendum proceeds, many school districts will continue to ensure that transgender students' rights are protected.

“The reality of this new legislation doesn't change us providing civil rights for all students, including transgender, so it's really not, from our perspective, a new law,” Superintendent George Sziraki of the Placer Union High School District told the Auburn Journal.

California's law mirrors developments occurring elsewhere in the country, where transgender students are fighting to ensure their access to proper facilities and programs. In June 2013, the Colorado Civil Rights Division ruled that a Colorado Springs school district violated 6-year-old Coy Mathis' rights by denying her access to the girls' restroom, and transgender facilities access gained renewed attention on January 30 when Maine's Supreme Judicial Court ruled that schools in the state must allow students to use the restrooms for the gender with which they identify.