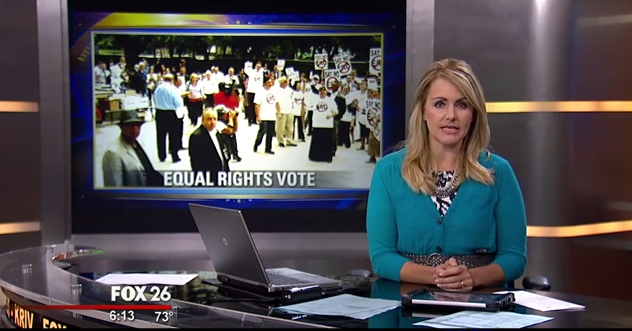 As Houston's Equal Rights Ordinance (HERO) faces a repeal effort at the ballot box, Houston media outlets need to do a better job of correcting right-wing misinformation about the ordinance, holding its opponents accountable, and ensuring that LGBT advocates are no longer pushed to the sidelines of the debate.

HERO is likely headed to the November ballot after a coalition fighting to repeal the measure announced that it had collected 50,000 signatures to place HERO up for a repeal vote.

On May 28, the Houston City Council voted 11 to six to approve HERO, which prohibits discrimination in housing, employment, and public accommodations. A coalition dubbing itself “No Unequal Rights” immediately launched a repeal drive, and the campaign's July 3 announcement that it had collected nearly three times the required signatures sets the stage for a divisive four-month slog. The repeal fight is likely to be especially damaging for Houston's LGBT community; scholars note that public referenda on LGBT rights can easily become dominated by misinformation campaigns.

In the coming months, Houston media outlets have the opportunity to correct their frequently problematic and misleading coverage of HERO . Here's how:

HERO opponents have focused particularly on the measure's protections for transgender people, asserting that affording transgender individuals equal access to gender-appropriate facilities will make it easier for sexual predators to assault women and children. But the transgender bathroom myth is completely baseless. Independent experts in states and cities that have already adopted transgender protections report no problems stemming from the laws, with one sexual assault victims' advocate calling the myth “beyond specious.”

Still, in the month after HERO passed, local media outlets in Houston gave significant play to the transgender bathroom myth.

The coalition leading the repeal crusade might be called “No Unequal Rights” - ostensibly because the ordinance grants “special rights” to the LGBT community. But the ordinance establishes the same non-discrimination protections that already exist in several Texas cities.

Among the most prominent groups supporting repeal is Texas Values, a group that has previously worked against efforts to curb anti-LGBT bullying and supports keeping anti-sodomy laws on the books. The group's president, Jonathan Saenz, is a vocal proponent of harmful “ex-gay” therapy, telling gay people that they need to "change." During the fight against HERO, Saenz has peddled the transgender bathroom myth and also shamelessly attempted to drive a wedge between the LGBT community and racial and ethnic minorities.

No Unequal Rights has also garnered support from the Alliance Defending Freedom (ADF), a right-wing legal group working internationally to help criminalize homosexuality, and the Family Research Council (FRC), an anti-gay hate group whose leader asserts a link between homosexuality and pedophilia and has declared that gay people are destined for "eternal damnation."

By highlighting the rabidly anti-LGBT views of the groups supporting the repeal effort, Houston media outlets can ensure that voters aren't kept in the dark about HERO opponents' extreme agenda.

Include LGBT Voices In Reporting

Although local outlets featured multiple citations of anti-LGBT groups and figures in their reporting on HERO, they have thus far failed to include any pro-LGBT groups or personalities, allowing the debate to be dominated by the most extreme voices.

LGBT people can give voice to the realities of discrimination in the workplace, housing, and public accommodations - putting human faces behind a public debate that has all too often stigmatized LGBT people as deviants unworthy of legal protection.

As a corollary, local outlets would be well-advised to stop relying on anti-LGBT smear merchants for commentary on the ordinance. When one side of a debate relies on blatant misinformation and bigotry, giving voice to “both sides” isn't being objective - it's being irresponsible.

Shoddy journalism no doubt helps explain how misinformation about HERO became so widespread that opponents managed to apparently collect enough signatures for a referendum. The next four months will undoubtedly witness an intensified effort to spread lies about the ordinance and to marginalize the LGBT community. This time, however, Houston outlets have the chance to provide coverage that informs voters and holds dishonest anti-LGBT activists accountable.