Republican congressional candidate Diane Harkey is touting an endorsement from San Diego Patriots (SDP), a group that has trafficked in bigotry against Latinos and Muslims and said that the Parkland mass shooting “just reeks of a false flag” attack.

Harkey previously promoted an endorsement from San Diegans for Secure Borders, which shares white nationalist propaganda and attacks Latino and Muslim immigrants as foreign invaders. The endorsement was removed shortly after Media Matters reported on it.

San Diego Patriots is a fringe group that's led by conservative activist Amy Sutton and claims that its mission is to “secure our nation and our communities from foreign and criminal threats, and to protect our Constitutional Rights, Liberties, and Freedoms.”

SDP has organized recent events with San Diegans for Secure Borders and its leader, anti-immigrant writer and former San Diego Minutemen head Jeff Schwilk. In 2009, a jury ordered Schwilk to pay $135,000 for defaming an Asian-American immigration activist with racist and derogatory remarks.

On its Facebook page, San Diego Patriots has trafficked in conspiratorial and bigoted rhetoric that echoes fringe right-wing media. The group has cast doubt on the legitimacy of the February 14 shooting at Marjory Stoneman Douglas High School in Parkland, FL; attacked political candidates because they’re Muslim; and portrayed Latino and Muslim immigrants as hostile invaders.

On March 18, SDP wrote that the Parkland shooting “just reeks of a false flag.” As The Guardian wrote, a false flag attack refers to “the idea that powerful forces routinely arrange massacres or terrorist atrocities, and make it appear as if some other individual or group did them, in order to achieve their sinister political goals”; Alex Jones is a frequent promoter of “false flag” conspiracy theories, including about the Florida shooting. 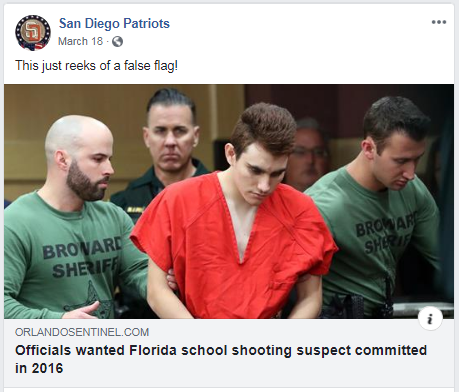 In February, SDP shared viral but fake information to assert that shooter Nikolas Cruz was a registered Democrat. Prior to being shared by SDP, the false claim was pushed by the disreputable conservative site The Gateway Pundit

SDP has also picked up the conspiracy theory -- promoted in conservative media -- that Parkland shooting survivor David Hogg wasn’t actually a student at Marjory Stoneman Douglas High School. The group wrote on April 1: “David Hogg involved with an incident in California last year! Is he really from here? What’s the truth about this guy?”

On April 4, one day after a shooting at YouTube headquarters in San Bruno, CA, SDP posted the following image of Hogg and another Parkland survivor, Emma Gonzalez. Both Hogg and Gonzalez have been smeared with conspiracy theories. 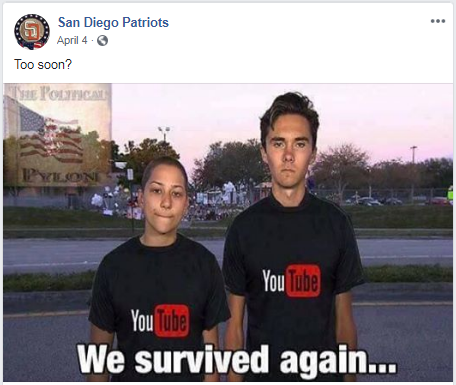 The Harkey-endorsing group has also trafficked in bigotry against Latinos and Muslims.

On August 24, SDP told followers to “please read” an American Thinker piece criticizing the existence of Muslim political candidates. The American Thinker commentary piece concluded that “enough questions and doubts exist to compel close scrutiny of all Muslim candidates who are seeking to break through as American political ‘firsts.’ Without a close examination, our political process and systems could be infiltrated with increasing numbers of Muslim candidates of questionable background and motivation who will follow the insidious civilizational jihad according to plan and at a dizzying pace.”

On April 24, 2017, SDP responded to an NBC News profile of Democratic congressional candidate Ammar Campa-Najjar -- headlined “A Young Latino Arab American Throws His Hat in Congressional Ring” -- by writing: “Watch out for this snake running for Congress in the 50th District against Duncan Hunter. He's a left wing, open border Arab/Latino. Worked directly for Obama.” The group added: “He's half Palestinian (and lived there) and half Mexican, but he converted from Islam to Christianity (or so he says) after 9/11. But he's against vetting unknown Muslim refugees and potential terrorists, like the San Bernardino shooter. Hmmmm. He's also 100% open borders, of course.”

On May 6, 2017, SDP encouraged people to listen to a radio interview with San Diegans for Secure Borders founder Jeff Schwilk “about the invasion in San Diego of unvetted Muslim refugees and of course foreign criminals (aka illegal aliens) from Mexico.” The group also shared a post from San Diegans against Islamic Sharia Law which stated: “Best news in years! Muslim refugee arrivals down 96% in San Diego County in FY18! Sanity is returning to our immigration system under Pres. Trump. AMERICA FIRST!”

On April 4, SDP shared a post from the Facebook group SoCal Patriots which called California Attorney General Xavier Becerra (D) a “Mexican enemy insurgent within our state government. … #LockHimUp.” SoCal Patriots linked to a Freedom Outpost piece claiming that Becerra “is working to destroy the United States and turn the Southwestern states into a Mexican nation. … We, as citizens, and not the illegal criminal aliens, should never accept what people like Xavier Becerra layout before us because they do not have the United States in their heart or blood.”

On March 16, 2013, SDP wrote that the “La Raza rebels are on the rise again. They want their amnesty and ‘rights’ for millions of illegal Mexican citizens occupying the U.S., or as they call it ‘Aztlan’ (Mexican territory). Shocking video exposes what ‘illegal immigration’ is really about -- the overthrow of the United States by our hostile neighbor to the south.”