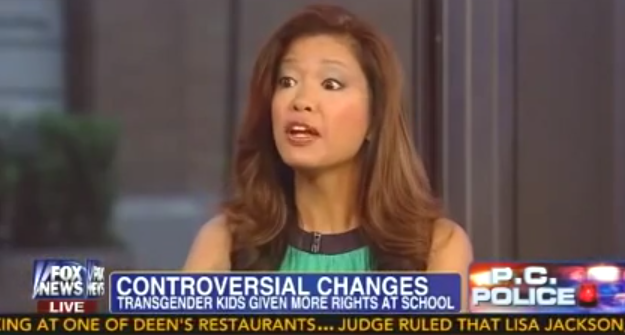 Evidence continues to mount that a new California law allowing transgender public school students to use the restroom facilities that correspond to their gender identity is being implemented successfully without causing the “anarchy and madness” predicted by right-wing media figures.

On January 1, California's recently enacted School Success and Opportunity Act went into effect, requiring public schools to allow transgender students to have access to facilities and extracurricular activities that correspond to their gender identity. A right-wing coalition aims to overturn the law in a November referendum, but an initial signature count suggested that the repeal campaign won't have sufficient signatures to put the law up for a vote. California officials have until February 24 to complete a signature-by-signature count.

Following passage of the law, right-wing media figures issued apoplectic predictions of bathroom harassment and inappropriate behavior, warning that students would pretend to be transgender in order to sneak into opposite-sex bathrooms.

Equality Matters contacted officials from a number of California's largest school districts to determine whether the right-wing horror stories about transgender students had come true in the first month of the law's implementation. Unsurprisingly, none of the school districts reported incidents of harassment or inappropriate behavior, with several pledging to continue accommodating transgender students even if the law is repealed in a referendum.

With 662,140 students enrolled in the 2011-2012 school year, the Los Angeles Unified School District educates more than one in 10 of all the students enrolled in California public schools. The School Success and Opportunity Act is hardly uncharted territory for the district, which began implementing trans-affirmative policies nearly a decade ago.

During that time, there hasn't been a single incident of bathroom misbehavior, according to Dr. Judy Chiasson, Los Angeles Unified's  program coordinator for Human Relations, Diversity and Equity.

Contrary to predictions from the likes of Fox News' Greg Gutfeld  and Bill O'Reilly that students would pretend to be transgender just so they could get into opposite-gender restrooms, “we have had no incidents of anybody pretending to be transgender,” Chiasson told Equality Matters.

That's because the district has a case-by-case process in place by which to ensure that the district's transgender protections benefit students who actually are transgender.

“We go by the rule of thumb of 'consistent/persistent' [gender identity],” Chiasson explained. “We don't let children [decide], 'I'm gonna be a girl during P.E. and the rest of the day I'm going to be a boy.”

Like Los Angeles, the San Francisco Unified School District codified transgender protections for its students well in advance of the statewide law.

“SFUSD policy has been in place successfully for ten years ahead of” the law, district spokeswoman Heidi Anderson said in an email. “We work actively with all families to guarantee their children are welcome and safe in our schools, and that of course includes our LGB students, gender variant students, and transgender students.”

Anderson said that the district had “experienced no incidents” since the new look took effect - something she said wasn't surprising “given our success with this policy over the years.”

The Orange County-based Garden Grove Unified School District enrolled nearly 48,000 students in the 2011-2012 school year, making it the 11th-largest in the state.

Implementation of the School Success and Opportunity Act is proceeding apace in the district, spokeswoman Amy Stevens told Equality Matters.

“We are compliant with the law and have had no incidences,” Stevens reported.

Sacramento City Unified determined before the new law took effect that it would codify transgender student protections as an insurance policy against a possible repeal, chief communications officer Gabe Ross said in an interview.

Sacramento school board officials unanimously passed a trans-affirmative policy in December, not wanting “to wait and see what happened with the petitions and the attempt to roll back the legislation,” Ross explained.

Ross said media speculation that the law would allow “bathroom free-for-alls” flies in the face of his district's experience.

“We haven't had anything of the sort,” he said. “Having students pretend to be transgender for a day isn't the intent of this policy and it isn't how it's going to be implemented.”

According to Ross, Sacramento will follow other districts' lead and implement the protections on a student-by-student basis.

“We have school counselors who know where there's a real need for student support and will work with transgender students to ensure that their rights are recognized,” Ross said.

For Riverside Unified, allaying parents' concerns about the law isn't difficult once district officials actually explain what accommodations for transgender students look like.

Spokeswoman Jacquie Paul said in an interview that she'd had three parents call to express concern about the law, but those concerns abated once she dispelled popular misconceptions. One mother, Paul said, was worried that the law meant it was okay for children to pick their own restrooms regardless of their gender. Once Paul ensured her that that wasn't the case, the mother's fears faded.

The law's implementation has been incident-free.

“We haven't had any issues come up,” Paul said.

The repeal effort will have no bearing on the district's determination to move forward with transgender rights.

“Long before this law was in place, we were accommodating students who were transgender,” Paul said. Their civil rights will continue to be recognized irrespective of whether opponents succeed in overturning the law.

“We want children to feel included and safe and comfortable, and if they're not, we want to change that,” Paul said.

Dovetailing with progress reports provided by other districts, San Jose Unified spokesman Rich Garcia said his district was carrying out the new law without problems.

Although stoking parental opposition has been a central goal of the law's foes, Garcia said it hasn't materialized in San Jose.

“We have had no problems at our schools, no letters written to the Board, or parents come to our school board meetings,” he said in an email. “I know our staff gave this much thought and were very careful to find a solution to this law that would be sensitive to our students and community.”