Anti-LGBTQ hate group C-Fam, which has special consultative status at the United Nations, sent a December 8 fundraising email that featured a custom meme of a rainbow flag with a swastika in it. The meme read, “Sexual Fascists Want to Take Away Your Rights. We are Beating Them at the UN. Help us.”

C-Fam’s fundraising email that included the meme repeatedly used variants of the term “homosexual fascists,” comparing LGBTQ people to Nazis. The email did not shy away from other anti-queer rhetoric, including saying, “We will always call homosexual behavior sinful, offensive, and deeply harmful to the individual who practices it and to society at large."

Formerly known as the Catholic Family and Human Rights Institute, C-Fam was granted U.N. special consultative status in 2014, which according to Political Research Associates, gives the group “virtually unfettered access to U.N. missions during key convention and treaty-drafting meetings.” Earlier this year, the State Department sent a C-Fam representative as one of the country’s public delegates to the United Nations Commission on the Status of Women.

C-Fam has worked closely with anti-LGBTQ hate group Alliance Defending Freedom, which just argued before the Supreme Court in Masterpiece Cakeshop v. Colorado Civil Rights Commission. Both groups have supported and promoted each other’s work on a number of causes. At least once, C-Fam President Austin Ruse spoke before more than 100 participants of ADF’s Blackstone Legal Fellowship, and C-Fam has hosted some of those fellows for summer internships.  In September, Ruse co-signed a letter to media, along with ADF and about a dozen other anti-LGBTQ and hate groups, that asked media outlets to drop the “hate group” designation in their coverage of these organizations. The letter referred to such groups as “public interest law firms and think tanks” and lamented that they were being associated with “neo-Nazis” and the Ku Klux Klan. It also called media’s use of the “hate group” label “the height of irresponsible journalism.”

C-Fam’s email is just the most recent example of its years-long campaign of demonizing lies and rhetoric about LGBTQ people. Ruse was the subject of controversy in 2014 when he said that “the hard left, human-hating people that run modern universities” should “all be taken out and shot.” He later had to apologize for the statement. Ruse has also said that all countries should pass laws against homosexual behavior “even if unenforced,” in order to “help society to teach what is good” and “prevent such truly harmful practices as homosexual marriage and adoption.” According to GLAAD, Ruse has claimed that, rather than bullying and social stigma, LGBTQ people and activism are the real cause of LGBTQ teen suicide and alcoholism. 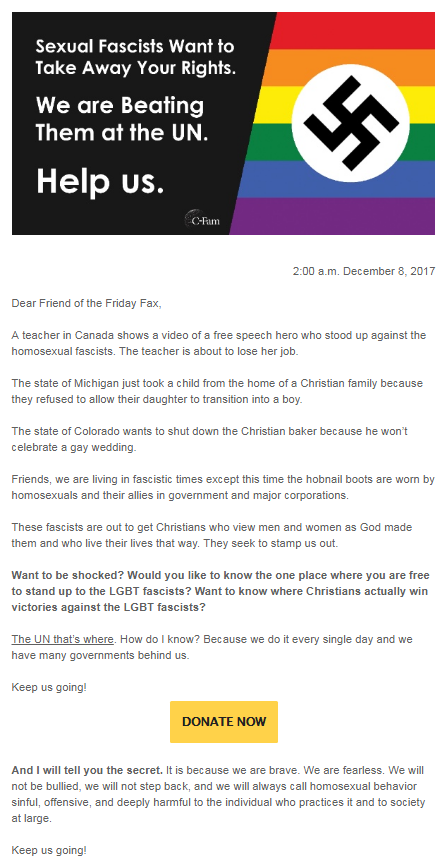 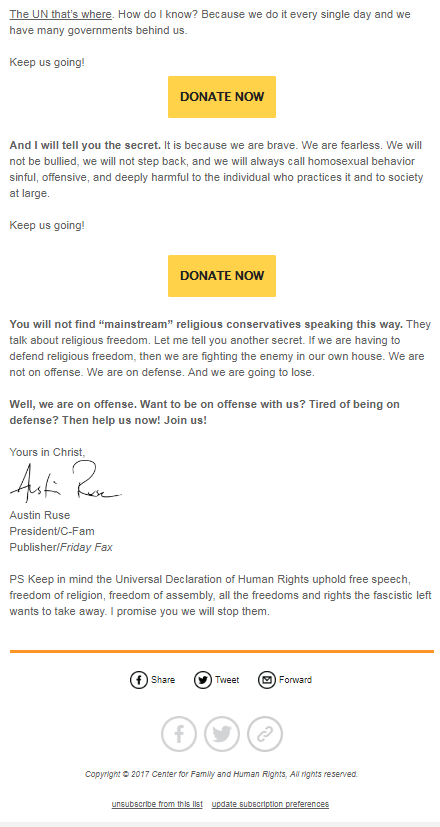