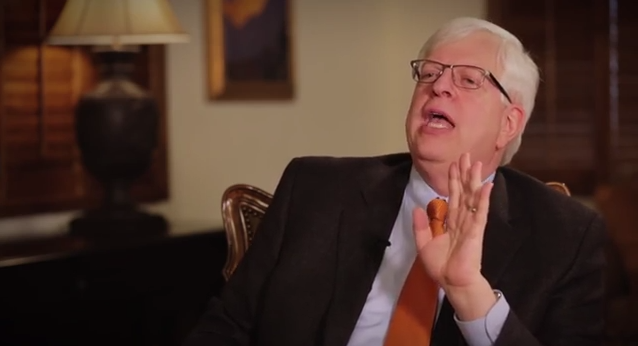 In a December 3 column for National Review Online, Prager joined the chorus of right-wing praise for The Book of Matt -- a book which attempts to prove that Matthew Shepard's murder wasn't motivated by anti-gay bias. In the book, Jimenez claims that Aaron McKinney and Aaron Henderson attacked Shepard as part of a meth deal gone wrong, not because Shepard was gay. Filled with wild conjecture, questionable or anonymous sources, and cavalier dismissals of strong evidence of McKinney's homophobia, the book has nevertheless served as a rallying cry for right-wing media figures determined to undermine the LGBT movement galvanized by Shepard's death.

Prager's column continues in that same vein, indicating a stronger interest in using the book as a cudgel against progressives than actually getting to the bottom of Shepard's murder (emphasis added):

It turns out that Matthew Shepard's murder had nothing to do with his being gay.

As early as 2004, the ABC News program 20/20 broadcast (to its credit) a denial by both murderers, Aaron McKinney and Russell Henderson, that the murder had anything to do with Shepard's being gay. It was, they both claimed, a robbery gone bad.

“It was not because me and Aaron had anything against gays,” Henderson told ABC.

As a result, ABC News was widely attacked by all those who had a vested interest not in truth but in maintaining the homophobia story: the liberal media, the gay-rights movement, and the lawyers for the victim's mother.

Now a book has been published, written by Stephen Jimenez, himself a gay man, that confirms the accuracy of the 2004 ABC News report. Matthew Shepard was involved in the hyperactive Wyoming meth drug culture; he was murdered over a drug deal; and his primary murderer was a bisexual who had probably slept with Shepard.

[I]t shows how powerful the left-wing media are, how they are dedicated to agendas rather than to truth, and how much of what Americans believe is shaped accordingly.

It would indeed be convenient for Jimenez's cheerleaders if only those with “a vested interest” were disputing his account of Shepard's murder. In reality, however, The Book of Matt has been condemned by Tim Newcomb, Henderson's appellate attorney, former Laramie police commander David O'Malley, and Detective Rob Debree, who said that investigators thoroughly probed the drug issue before concluding that Shepard's murder wasn't a “meth crime.”

Meanwhile, despite changing his story on multiple other aspects of the case, McKinney -- a self-proclaimed “homofobick [sic]” individual -- has consistently denied knowing Shepard prior to the attack.

Given his determination to call out allegedly biased or unreliable critics, you'd think Prager would apply the same scrupulous standards of objectivity and reliability to Jimenez's sources. They include confessed meth addicts, a disbarred attorney who agreed to talk to Jimenez on the condition that he disputed the conventional understanding of Shepard's death, and one purported former lover of Shepard's - whom Newcomb revealed had apparently attempted to extract money in exchange for information on the case. But Prager simply transcribes Jimenez's arguments as the gospel truth, apparently uninterested in the sources behind them.

Of course, while it's important to expose the deep holes in the narrative beloved by Jimenez and his right-wing fans, conservative media figures aren't particularly concerned about the specifics of the Shepard case. What excites them is the opportunity to use Jimenez's book to highlight the ostensible "mythology" LGBT rights and other progressive goals are centered on. Accordingly, Prager links Shepard's murder to other issues, including racial injustice, which Prager also alleges has been exaggerated by a liberal media intent on spreading “lies” to advance its agenda.

Why all this mendacity?

There are truth-tellers and there are liars on the right and on the left. But for the Left, truth is subordinated to whatever it is the Left most cares about. Gay rights, minority rights, women's rights, government health care, and environmentalism are only the most obvious current examples.